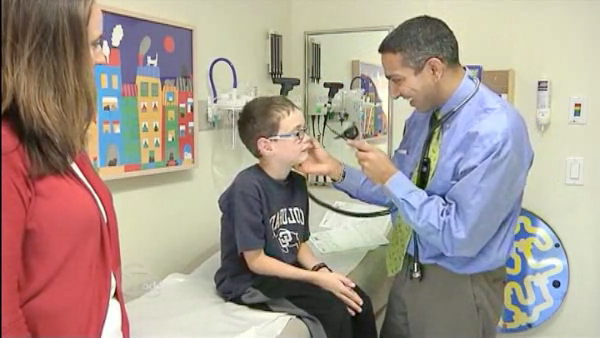 Dr. Manish Butte has taken on hard to solve cases, being likened to the physician on the TV show, ‘House.’ (photo tcell.mimg.ucla.edu)

LOS ANGELES, CA – A team of UCLA researchers led by Indian American Dr. Manish Butte will receive a multi-million-dollar grant to study why some people suffer from a devastating fungal infection called Valley Fever, while others suffer seemingly no impact from the disease. The group will receive $8.4 million over five years from the National Institute of Allergy and Infectious Diseases (NIAID), part of the National Institutes of Health (NIH), to establish one of three Coccidioidomycosis Collaborative Research Centers.

Butte was born in Philadelphia, grew up in NJ, studied physics and earned his M.D. at Brown University in the eight-year program in Liberal Medical Education. He then studied structural biology at UCSF and graduated with a Ph.D. in Biophysics.

He is the E. Richard Stiehm Endowed Chair, professor, and chief of the division of immunology, allergy and rheumatology in the department of pediatrics, and will lead a group of researchers from UCLA and UC San Diego. Patient samples for their project will come from collaborators at the UC Davis Center for Valley Fever and the Valley Fever Institute of Kern Medical Center.

The Coccidioides (“cocci’) fungi that cause Valley Fever grow in the soils of California and the desert Southwest, and range down through Central America all the way down to Argentina, where it was first identified in the late 1800s. Most people who are infected have no to mild symptoms and recover with no treatment or with antifungal medication, but for reasons unknown some experience a life-threatening, invasive disease called disseminated coccidioidomycosis (DCM) that ravages the body.

“Everyone in the endemic areas is susceptible to this infection, but we have almost no ability to predict who will develop disseminated disease and lack an understanding of what part of their immune response fails to control the infection. With nearly 10,000 reported cases of Valley fever and 200 cases of DCM yearly in California, our state alone spends approximately $1 billion per year on coccidioidomycosis,” said Butte. “There is an urgent need to better understand DCM to enable better prevention, diagnostics, prognostics and treatments.”

The team led by Dr. Butte will study the intersection between virulent coccidioides that takes advantage of compromised immunity and the genetic risk factors that allow severe disease to infect and take hold.

The team will work in parallel with awardees from UC San Francisco and the University of Texas, San Antonio, to transform understanding of this invasive fungal infection, restoring hope for patients through new approaches to prevent, diagnose and treat DCM.