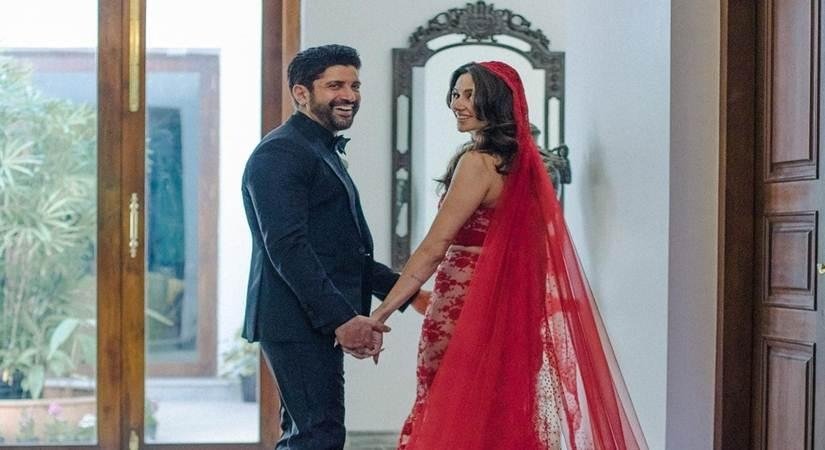 Shibani Dandekar and Farhan Akhtar tied the knot in a fairytale wedding in Khandala recently, with close friends and family in attendance. The couple had been dating for around four years before they decided to get married.

Dandekar has always been known for her spunky and glamourous fashion choices. And true to her signature style, the bride didn’t go the traditional route or pick designers who have become celebrity staples. Instead, Shibani chose to keep it young, keep it fun and keep it fresh, sending a cue to all the brides-to-be who feel constrained to pick bridal staples.

The bride’s unconventional wedding gown by JADE by Monica and Karishma was the perfect combination of traditional and Modern, Indian and Western, heavy and light. Instead of wearing a white dress to walk down the isle, Dandekar chose to keep it Indian by adding a touch of traditional red in keeping with Indian rituals. The elaborate veil with a long trail gave an ethereal and majestic affect.

Dandekar was the quintessential modern bride choosing a Boho theme for her mehendi night and classic hues for her dreamy ceremony. Payal Singhal created a bohemian backless choli with tie-up and tassel details, paired with a Kalidar sharara. Payal also hosted the mehndi and designed the theme and decor inspired by the couple’s time in Tulum and gave it a Mexican Feista meets Mehndi Mela vibe.

Keeping with the theme the embroidery was a mix of thread, wool, cord work with mirrors, and zardozi work in bright pop colors inspired by Mexican folk embroidery.

The bride chose soft makeup with brown smokey eyes rimmed with kohl and a nude lip. Her hair was freshly blow-dried and cascaded over her shoulders. She finished off her look with a pair of statement earrings.