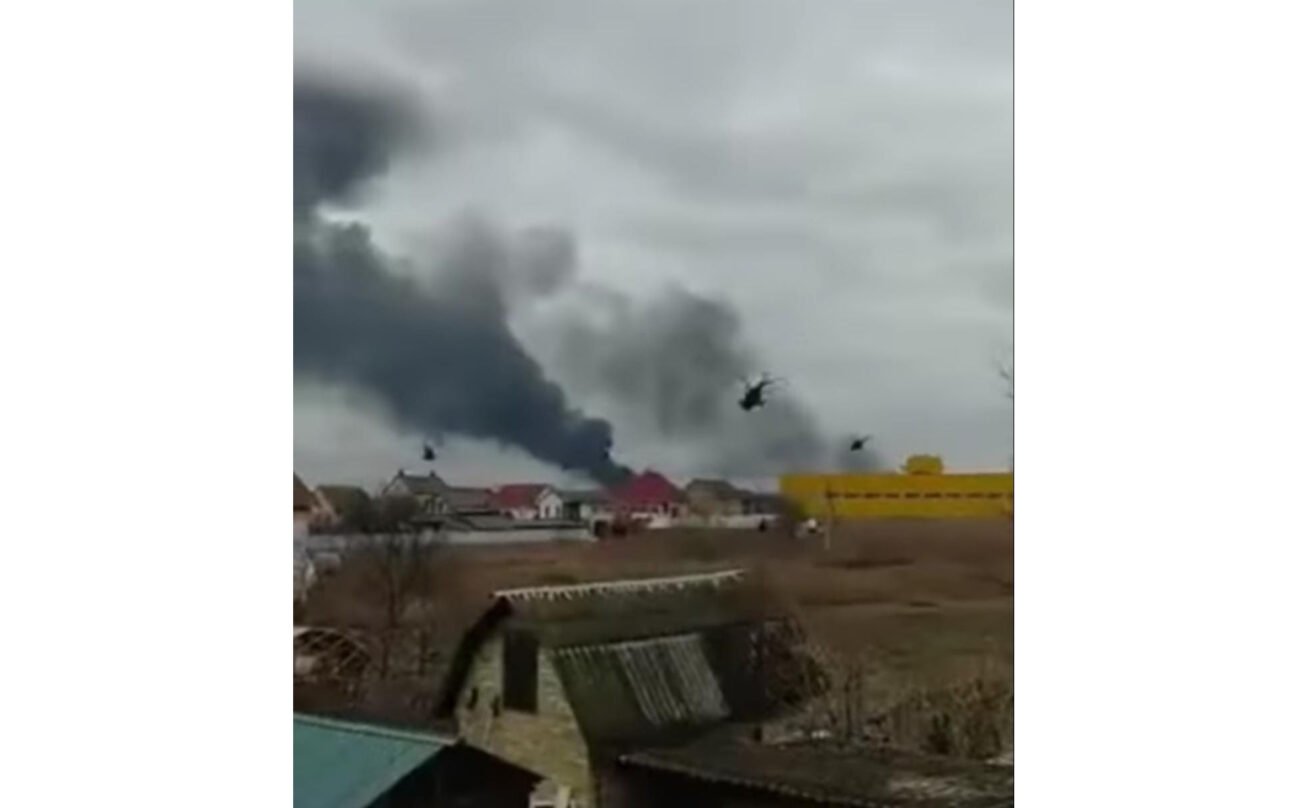 NEW DELHI (IANS) – As the situation in the conflict between Russia and Ukraine gets increasingly bitter with Ukraine receiving overwhelming sympathy from the international community for bravely facing a powerful Russian assault, the stand of India on the UN resolution against Russia has drawn significant attention. India along with China and UAE abstained from the voting aimed at charging Russia for undertaking the assault on Ukraine.

The resolution “deplores in the strongest terms Russia’s aggression against Ukraine” and demands that Russia “shall immediately cease its use of force against Ukraine and shall refrain from any further unlawful threat or use of force against any UN member state”. The resolution further demands an immediate return to status quo by Russia, including withdrawal of its stand on Donetsk and Lugansk regions of Ukraine.

India would have weighed the contents of the resolution which undoubtedly tend to be harsh in some ways in demanding from Russia a return to status quo which appears impractical given Russia’s prevailing stance on the issue and the preconceived notion that Russia carries on how to deal with Ukraine on issues that are of concern to Russia. India, however, weighed its statement carefully stating that India was “deeply disturbed by the recent turn of events in Ukraine”. Interestingly, there was a conscious effort to avoid the word “Russia” in this context. India also called for cessation of violence and use of diplomacy and dialogue for resolution of the issue.

India’s decision to abstain has a larger strategic relevance with a long-term perspective taking into consideration India’s national interest, and is not a short term emotionally charged move. The Indian stand is being seen as a mature and balanced move given India’s priorities which have different connotations from that of European nations and the US. Abstention by UN member nations during voting on critical issues during such complex situations need to be viewed holistically rather than in the form of a “herd action”.

Analysts feel that a typical “herd action” on resolutions tends to kill the relevance of flexibility and adjustment which the UN provides to member states while taking decisions on such crucial issues. The strongly worded resolution against Russia is reflective of the anger and frustration among member states at the brazenly unflinching action by the Russian side and the difficulties and challenges faced by the Ukrainian people. However, in doing so the international community might further push Russia to the brink making it diffident in challenging the West through more aggressive posturing.

History has shown that in situations where an excessive majority build up occurs against a particular country considered an ‘aggressor’, especially when the aggressor nation is a powerful state with the necessary wherewithal to adopt a hard stand on critical issues, and is driven by strong nationalist sentiments, there is need for some nations with fairly balanced and healthy relations with the ‘aggressor’ state to play a calibrated role between member states of the UN to find solution to the problem rather than indulge in strong rhetoric. It is with this aim that India, while seeking an end to violence in Ukraine, has refrained from voting against Russia.

Today we are living in a world where pragmatic diplomacy has an upper hand and India must adopt a stand taking into consideration its decade old relations with Russia which remains a crucial strategic partner. This special relationship has its roots in the strong association that existed between Moscow and New Delhi ever since the days of the Soviet Union. Decision by India to vote against Russia on a resolution at the UN containing such harsh language would not only have serious implications in terms of Indo-Russia relations, but could also leave India in an awkward situation unable to decide its stakes caught between Russia, Ukraine and the West.

Another aspect which needs attention is the fact that in the ensuing complex situation that has emerged in Ukraine, the West has a more direct involvement by virtue of being part of the politico-security matrix of the region and in contributing in some ways to the process of Ukraine’s distancing from Russia. Understandings and agreements reached between the US and Russia and deliberations held by European countries with Russia and Ukraine as part of the larger European politico-security dynamics makes it incumbent on these countries to view the evolving situation from a different perspective as compared to India which is not part of this geographical mass.

India has to thus view the issue through an entirely different prism giving priority to its possible role as a peace maker considering India’s healthy relations with the West as well as Russia. With India’s wide acceptability in the global community and its balanced and cautious approach in dealing with critical issues of this nature, India could play an important role as a neutral party in negotiating towards a peaceful resolution to the ongoing catastrophe in Ukraine. This is a role that China might not be able to play due to the serious trust deficit it faces with the West and the US.

From the Indian perspective, another aspect of relevance is that Russia along with China yet remain the powerful duo whose voice cannot be ignored – whether at the UN or otherwise. Together the two countries not only dominate the global economic trends but also the new strategic dynamics in the global arena, including in the Asian continent. India cannot afford to tow a line distinctly different from these two nations given India’s strategic priorities. Relations with both these countries are of utmost importance for India at this stage when the geo-political dynamics has been undergoing a shift creating more space for these nations.

At the same time, going by the Russian stand, the West and the US have remained vehemently opposed to any space being given to the Russians in the European theatre squeezing them from all fronts at the cost of Ukraine and the Baltic states. The issue of NATO expansion has been a major concern for the Russians and the preferred option for the West would have been to negotiate and discuss such issues with the Russian side rather than resorting to nuanced initiatives using Ukraine, which the Russian side has always viewed with suspicion.

In as far as the Russia-Ukraine issue is concerned, it is also a fact that the background and history of Europe in the period following the breakup of the Soviet Union has been very complex and intricate with numerous understandings and agreements reached between European countries and Russia as well as deliberations between Russia and Ukraine on a range of issues, most of which India is not privy to. India has thus been emphasizing on the need for ‘dialogue and diplomacy’ and an end to violence — an apt strategy on the Russia Ukraine issue at this stage.

On a different note, India has often found the western approach to dealing with certain issues of concern to India somewhat irrational and self-centered. Under the garb of freedom of speech, anti-India organizations and individuals have been allowed to flourish in these countries. Even in cases where credible evidence has been catered to countries in Europe and Canada about plausible threats to Indian interests emanating from these countries, one has seen a meek response. This only further reaffirms India’s commitment to adopt a standalone and independent position based on its national priorities when it comes to UN resolutions on international issues.

Going by the track record, India has been adopting an independent stand in the past as well and has abstained on a few occasions on certain critical resolutions at the UN, even though these decisions drew significant opposition from the international community. During the March 2021 UN sponsored resolution in the UNHCR against Sri Lanka for an international probe into alleged human rights violations in the last leg of the civil war, India had abstained much against the general understanding that India would vote for the resolution.

Moreover, political parties in Tamil Nadu had then mentioned that in the event of India refusing to vote for the resolution there would be chaos and mayhem in Tamil Nadu. However, India abstained from the voting and there was no major reaction in Tamil Nadu. The Indian position in this instance too was to keep the diplomatic space open with the Sri Lankan government and use it for the larger benefit of the Tamils in Sri Lanka rather than agitating Colombo on the issue and pushing them to the corner.

Likewise, another occasion when India had abstained was in June 2021 on the resolution on Myanmar which called on the country’s military to end the state of emergency and to reopen the “democratically elected parliament”, among other things. It also called for releasing civilian leaders “immediately and unconditionally” and laid down a set of other conditions. India had abstained in this case too, adopting a careful stance and clarifying that India had “direct stakes in the maintenance of peace and stability in Myanmar”. However India supported the end of violence and the process for democratic transition. During another voting process at the UNHRC in June 2021 on a resolution to probe the Gaza violence, India had abstained saying that its position is not new and it has abstained on previous occasions too.

India has thus been adopting a confident stand when it comes to voting in the UN keeping in view its national priorities and the broader perspective rather than pursue the “herd action” approach. The international community realizes this aspect when it comes to India abstaining from such critical votes. Needless to mention that such decisions are taken by New Delhi after thorough discussion with various stakeholders who have a role to play in this issue. Real politics is different from the rhetoric-based narrative which at times dominates the proceedings at the UN, often led by a group of nations. It is in this context that India needs to adopt a balanced and mature stand as it has done in this case.