HomeAmericasIndo AmericaIndia Must Work for Direct Dialog Between Biden and Putin

India Must Work for Direct Dialog Between Biden and Putin 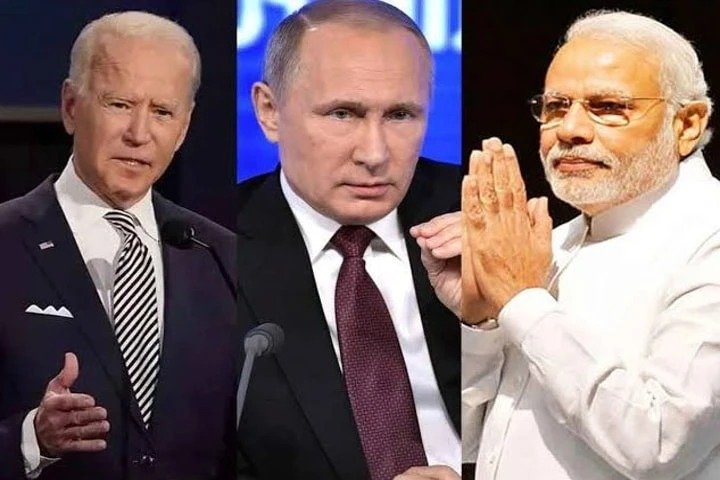 India Must Work for Direct Dialog Between Biden and Putin

NEW DELHI – The Ukraine war brings into light once again the irrelevance of the UN charter and all the noble principles and values that powerful states swear by in their conduct of international and state-to-state relations and how they are sacrificed at the altar of their self-perceived national interests and security.

Right or wrong, powerful states can present their narratives in a manner that can justify their invasion of a weaker country and can get away. The US has done it in Iraq in the past, and now the Russians are doing it in Ukraine. The US called Saddam Hussein an abominable dictator with his WMD posing a threat to the regional security and the Russians calling the regime in Kyiv neo-Nazis and drug addicts who must be overthrown even at the cost of pulverizing the country with rockets and missile carpet bombing.

The victims are always innocent people including women and children. When two elephants fight with each other, it is the grass that suffers, so the saying goes. Behind the intensification of the conflict and the cause of war lies Western obsession with Russia trying to expand its empire and restore the past glory of the Soviet Union, on the one hand, and President Putin’s determined mission to retain its dignity as a major super power in the face of the Western design to reduce it to an insignificant country by incorporating one after another the old Warsaw Pact countries into the fold of NATO, on the other. Russians feel betrayed by the West in reneging on their assurance not to expand NATO to its borders and wants Ukraine to be a buffer state between it and NATO.

By the same logic, however, Russians can also be blamed for reneging its own assurances to Ukraine in 1994 to respect the sovereignty and territorial integrity when the latter surrendered its nuclear weapons. Surely, if Ukraine had retained its nuclear weapons, Russians would not have dared to invade the country as it is doing today. Incidentally, the plight of Ukraine in the face of Russian invasion might impress upon some of the aspiring countries the importance of nuclear weapons for their security and hasten the process of further proliferation.

Based on their own perception of its national security, Russia has also harassed Ukraine by encouraging the Donbass region in Eastern Ukraine to become first separatists and later declared as independent states (Donetsk people’s republic and the Luhansk People’s Republic). Crimea was taken away from them by the Russians. Ukraine itself also bears certain responsibilities in provoking the Russians. Knowing fully well that Russia was overwhelmingly powerful compared to it, Ukrainians should have exercised restraint in their dealings with Moscow. Possibly, Ukraine was also acting under the assumption that the West will come to their rescue if Russia invades the country.

The West did assure Ukraine with weapons and other material support and encouraged President Zelensky to be belligerent towards Moscow. But when the invasion did take place, the expected support did not arrive in time for Ukraine to be able to carry out greater resistance. This is evident from Zelensky’s current outburst against the West and NATO for ditching him. He had asked the West to impose a ‘no fly zone’ on the skies of Ukraine which was flatly rejected, for that would have forced them to shoot down Russian planes coming over the Ukrainian sky, which in turn, would have converted the war into a war between Russia and NATO. With Putin’s order to keep nuclear weapons on alert and his talk of a World War III to be a nuclear one, the West has also become cautious not to provoke Russia and engage in a direct conflict between NATO and Russia. The West’s priority now is to secure the Baltic States and therefore focusing on it.

On the day thirteen of the Russian invasion, most parts of Ukraine looks devastated, properties destroyed, many lives already lost, people fleeing their homes to save themselves from the bombing and missile attacks. More than a million Ukrainians have already taken shelter in neighboring countries, the figure might reach even 2 million soon, creating a refugee and humanitarian crisis. Some civilians have stayed back to fight against the advancing Russian army but their chances of survival against the Russian juggernaut are remote, even though they are fighting heroically in the midst of rising nationalism and patriotism in the country. Most of the important Ukrainian cities are devastated beyond recognition. The capital city Kyiv is still under the control of the Ukrainians but its outskirts have been reduced to rubble. And it is a question of time when the Russians will take control of the capital city though with much damage and destruction and heavy losses of life.

After phone calls from some world leaders, including Prime Minister Modi, to Putin the Russians have now reportedly declared a ceasefire in four cities, namely Kiev, Kharkiv, Mariupol and Sumy for allowing evacuation of civilians from those cities, but pounding of other areas are continuing. One doesn’t know whether the ceasefire will actually be followed or the operations in those cities will continue or not. Most of the important infrastructures of the country have been destroyed. Despite all the destruction and imminent fall of Kiev, the Ukrainian leadership refuses to cave in and offers relentless resistance to the advancing Russian forces. The circumstances and the history that brought this catastrophe reminds one of life in the Hobbesian state of nature- nasty, brutish and short, the last one applicable more for the Ukrainians. The Russians have not hesitated even to bomb the nuclear plant. Fortunately fire has been extinguished in the plant and as of now there is no radiation from the smoke. Another path to catastrophe would have opened if there were radiation leaks which would have been disastrous not only for Europe but also for Russia.

For saving innocent people, women and children perishing under the Russian bombing and missile attacks, there is an immediate and urgent need to stop the war and take recourse to dialogue and negotiation, for the war will not lead to the ultimate victory of any of the conflicting parties. Even if the Russians succeed in demilitarizing and demolishing Ukraine for the time being, Moscow will be entangled in Ukraine for a prolonged and protracted conflict. Even if their stated goal succeeds in overthrowing Zelensky and installing a pro-Russian government in Kyiv, it will not survive for long.

Keeping an occupation force in such a large country as Ukraine is not practical. Even if it is a question of territorial integrity and sovereignty of Ukraine involved, Zelensky should also stop grandstanding and opt for a negotiated settlement. The West’s strategy to keep Russia bogged down over a long period of time and slowly bleed Moscow through a plethora of sanctions would also result in disaster not only for Russia and themselves but also for the rest of the world. The West has a major responsibility in this conflict and it must rise to the occasion to speak directly to Putin and come for a mutually amicable settlement whereby Russian security concerns and Ukraine’s sovereignty can be assured through declaring Ukraine as a neutral country. The West must give up its obsession with Russia and must absorb it as a major stakeholder in European security. Ukraine’s security concerns vis-a-vis Russian attempts to nibble at its territory also have to be factored in any future negotiation and dialogue. Ultimately all will have to recognize that war does not help any, as all the conflicting parties will be affected by its collateral damage, particularly its economic fallout. The world has not come out from the economic fallout of Covid-19 as yet. On top of an already declining world economy, the war in Ukraine will further throw the world economy into a tailspin.

India has correctly taken a neutral stand in the ongoing war between Russia and Ukraine keeping in mind its own national and security interests and is currently focussed more on the 18,000 Indian students from the warzones and has received cooperation from both Russia and Ukraine in its efforts. That mission appears to have been largely accomplished.

Even while asking conflicting parties to respect the United Nations charter and sovereignty of countries, India has abstained from criticizing the Russians for the invasion of Ukraine. But as the war leads to destruction of Ukraine, loss of innocent lives of many Ukrainians, New Delhi will come under further pressure from the world community to abandon its neutrality. India itself will find it difficult to morally support its position of keeping mum on the Russian destruction of a sovereign country. India therefore strongly supported immediate cessation of hostilities and war and go for dialogue and diplomatic solution to the problem.

While New Delhi has a large stake in maintaining friendly relations with Russia for its dependence on Moscow for defense equipment and spares, it has also a large stake in maintaining close strategic relations with the United States and other Western countries for both security and economic reasons. Prime Minister Modi has kept himself in touch with both President Putin and President Zelensky and in his own way asking them to exercise restraint and go for dialogue and diplomatic solutions to their problems. Modi is also in touch with Washington and other two of the Quad partners, namely Australia and Japan through virtual meeting. It will go a long way in India’s role as a major global power if Modi can use his personal relations to impress upon the West and Russia for direct talks between Presidents Biden and Putin in bringing the war to an end and go for a settlement that takes care of the security concerns of all the countries involved in the conflict.