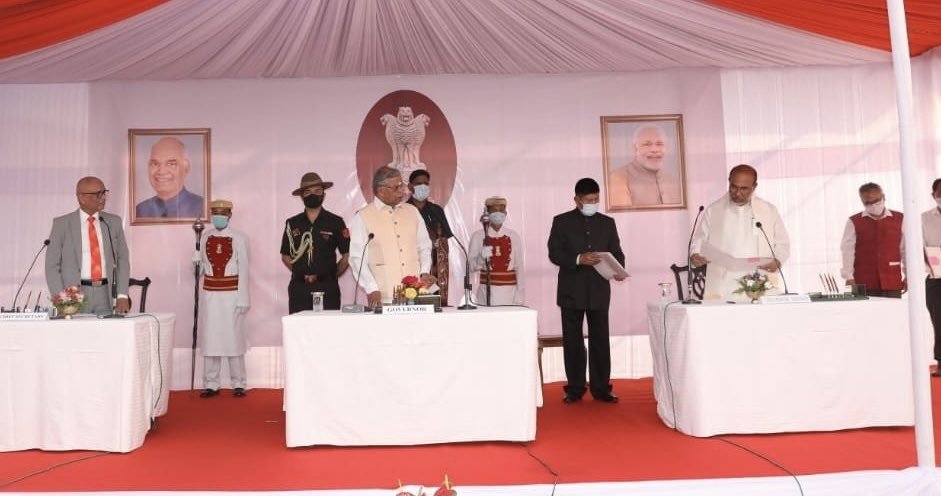 IMPHAL (IANS) – Nongthombam Biren Singh was sworn-in as the Chief Minister of Manipur for the second consecutive term on Mar.21, 12 days after the BJP secured a thin majority in the February-March assembly elections, results of which were declared on Mar. 10.

A day after he was named as the leader of the newly-elected BJP legislators in the state, Singh was administered the oath of office by Governor La Ganesan during a ceremony at the Raj Bhavan here.

Besides the Chief Minister, five newly-elected MLAs of the BJP and its ally Naga People’s Front (NPF) were also sworn-in.

Biswajit Singh, a second-in-command of the previous BJP government, was also the strong contender for the top post while former assembly speaker Khemchand Singh and Govindas Konthoujam, who was the Manipur state Congress president and last year joined the BJP, tried to capture the CM’s chair but the party’s central leaders chose Biren Singh.

Singh, 61, a former Congress leader, joined the BJP in 2016, and in the recent Assembly elections, won from his traditional Heingang constituency for the record 5th time.

He began his career as a football player and got recruited in the Border Security Force as a sportsman. After quitting the BSF job, despite having no experience, he began a vernacular daily, “Naharolgi Thoudang” in 1992 and worked as its editor till 2001 before he joined active politics in 2002.

In 2002, he fought and won his first electoral battle from Manipur’s Heingang assembly constituency as a candidate of the Democratic Revolutionary People’s Party.