‘The Kashmir Files’ Reveals Tip of the Iceberg 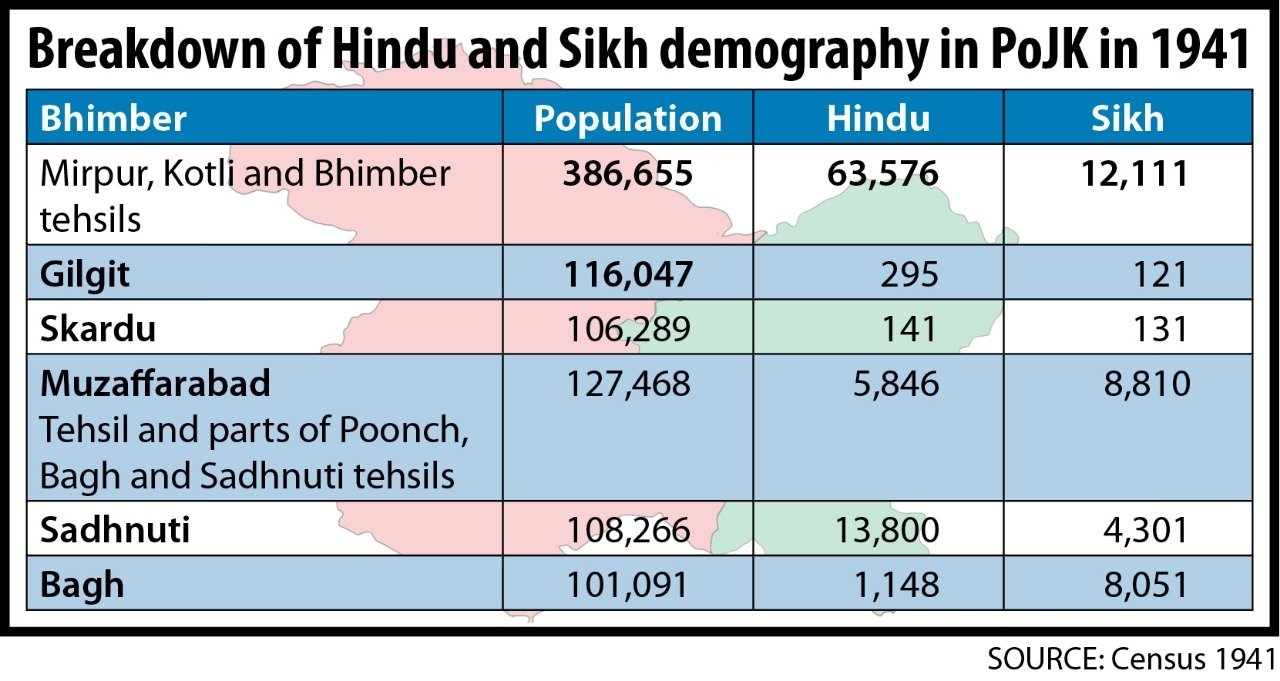 ‘The Kashmir Files’ Reveals Tip of the Iceberg

The movie released in India called ‘The Kashmir Files‘ is a brave attempt to reveal the atrocities committed by the Pakistan sponsored Jammu Kashmir Liberation Front and other Jihadi proxies and with conformity of a significant number of local Islamists in the Valley of Kashmir.

The atrocities were executed against the indigenous Hindu minority living in Kashmir during the 1990 and led to the genocide and forced exodus of nearly 500,000 Kashmiri Hindu Pandits from the Valley.

However, what the movie reveals is like peeling the first lay of the onion. The genocide of the Kashmiri Hindus, in modern day and age, did not begin in 1990 in the valley. It goes way back to when Pakistan army attacked the independent state of Jammu and Kashmir on Oct. 22, 1947.

At the time of partition of India, Jammu and Kashmir territories occupied by Pakistan today (PoJK) had a thriving Hindu and Sikh population. The table below gives a breakdown of the Hindu and Sikh demography in several districts in PoJK in 1941.

A survey conducted by Snedden and published in 2012 mentions that “there are no estimates of Hindus or Sikhs left today in the region and the entire population is assumed to have either been expelled or killed”.

The report, widely quoted by research scholars, conforms that they were not able to find a single Hindu or Sikh in the entire region of PoJK. It is estimated that around 122,500 Hindus and Sikhs went missing from PoJK during and after 1947 invasion of PoJK.

The Hindu population in Bhimber tehsil was 35 per cent. None have survived the 1947 Pakistan sponsored Hindu-Sikh genocide. But the worst atrocity, to my knowledge, was committed in my hometown of Mirpur where 25,000 Hindus and Sikhs were rounded up, mutilated, shot and beheaded and our women raped by ‘Allah O’ Akbar’ chanting Pakistan army and religious fanatic members of Lashkar.

To this day November 25 is observed as Mirpur (Massacre) Day by the family members of those who were lucky to reach Jammu. On that ill-fated day in 1947 Pakistan army and the mercenary tribal Lashkar entered Mirpur setting on fire several parts of the city, burning down shops and houses of ‘Kafir’.

A couple of days before the fall of Mirpur, a convoy of 2,500 Hindu and Sikh had managed to make their escape along with the state troops of Jammu Kashmir and reach Jammu safely. Those who were left behind were rounded up and marched to Ali Baig where the invaders said that a Gurdwara had been converted into a refugee camp.

What was thought to be a march to safety soon turned into a death march as the Pakistan army and members of the mercenary Lashkar killed over 10,000 Hindu and Sikh along the way. They abducted a further 5,000 of our women most of who were the sold in the bazars of Rawalpindi, Jhelum and Peshawar.

Out of 25,000 Hindu and Sikh captives, only 5,000 made it to Ali Baig. However, the killing and rape of the captive men and women continued unabated by their prison guards. Only 1,600 were later rescued by the International Committee of Red Cross who brought the survivors to Rawalpindi and transferred to Jammu.

By 1951, only 790 non-Muslims were alive out of a total population of 114,000 Hindu and Sikh in PoJK. Today there are none. The Mirpur massacre death toll is put over 20,000. Many women committed suicide by consuming poison or by jumping over a cliff. Similarly, numerous men also committed suicide.

The genocide of Hindus was repeated in Rajouri, Baramulla, Muzaffarabad, Bhimber just to mention a few and continues to this day in Kashmir. The movie ‘The Kashmir Files’ has just revealed the tip of the iceberg. The horror of the Hindu genocide is far more deep-rooted and horrific than it might seem on a silver screen.

(Mirza is a human rights activist from Mirpur in PoJK. He currently lives in exile in the UK)