HomeAmericasIndo AmericaUkraine – India Abstains Again in UN, But This Time is With the US

Ukraine – India Abstains Again in UN, But This Time is With the US 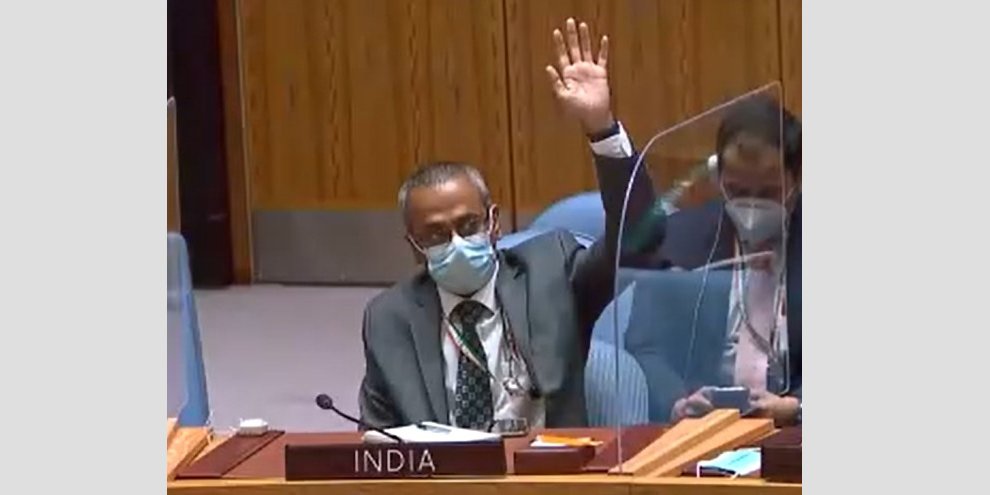 Ukraine – India Abstains Again in UN, But This Time is With the US

India’s Deputy Permanent Representative R Ravindra raises his hand at the United Nations Security Council on Mar. 23, to vote to abstain on a resolution proposed by Russia on the humanitarian situation in Ukraine. (Photo: UN)

NEW YORK, NY (IANS) – India has abstained for the fifth time on a UN resolution on Ukraine, but this time it was on a Russia-sponsored resolution in the Security Council and New Delhi was on the side of Washington and its allies.

The resolution on the humanitarian situation in Ukraine co-sponsored by Belarus, North Korea and Syria failed on Mar.23 even without a veto as it got only the votes of Russia and China, while all the other 13 Council members abstained depriving it of the minimum of nine votes needed to pass.

Unlike during the past abstentions relating to Ukraine, India kept silent on this vote, the first time it sided with the West, even if only through an abstention.

India’s Foreign Secretary Harsh Vardhan Shringla, who was in New York and had spoken at the Council on Mar.23 morning on relations with the Arab League, was noticeably absent when the Russian resolution was taken up.

Deputy Permanent Representative R. Ravindra was in India’s chair at the Council where he raised his hand to record the abstention but did not speak either on the resolution or explain the decision to abstain as India had done before.

India had earlier abstained in the Council on two procedural votes related to Ukraine and on a resolution condemning Moscow’s invasion that was vetoed by Russia.

At the Assembly, it was one of 35 countries abstaining on a resolution condemning the Russian invasion, although the measure was carried by an overwhelming majority of 141 in the 193-member body.

This Council vote took place amid a flurry of diplomatic activity across the UN and a tangle of resolutions and had all the makings of a diplomatic chess game — only to see Russia checkmated.

In a Moscow manoeuvre, the vote on the resolution took place while the General Assembly was discussing a resolution from Ukraine with the backing of about 90 countries condemning Russia’s invasion.

The resolution is almost certain to pass in the Assembly and, therefore, Russia wanted to pre-empt it by asking for a vote on its version in the Council ahead of the Ukraine resolution, even though it had cancelled a request for a vote on it earlier.

France and Mexico had proposed a Council resolution calling for humanitarian assistance to Ukraine, but it had languished under the threat of a Russian veto and two countries wanted it taken up in the Assembly, where no one has veto power.

South Africa, which like India is trying to stay neutral, had also suggested a resolution on the humanitarian situation in Ukraine which would not condemn Russia, but did not introduce it when the Assembly met on Wednesday.

The South African resolution was opposed by the Western countries which want an express condemnation of the Russian invasion as the cause of the humanitarian crisis.

The meeting on Ukraine was not on the Council’s original agenda, but was added on Mar.23 morning at Moscow’s request for 3 p.m. and then pushed to 5 p.m. amid Russia’s desperate diplomacy.

Russia’s Permanent Representative Vasily Nebenzia asserted that Moscow’s resolution was on the lines of the France-Mexico resolution, “but free from any politicising and in that analogous to other humanitarian resolutions of the Council”.

It called for a ceasefire, unhindered evacuation, access to humanitarian aid, prohibition of attacks on infrastructure and a call not to place heavy military equipment in civil areas, he said.

He asked the US, “Why did you abstain? You could have vetoed it?”

The US, France and the UK did not want to veto it because it could be used out of context by the Moscow propaganda machine, and they knew it would fail because it could not muster the needed nine votes.

The US and its allies called the Russian manoeuvre a cynical attempt to evade responsibility for its invasion and to divert attention away from the continuing catastrophe it is causing.

“Russia does not care about the deteriorating humanitarian conditions, or the millions of lives and dreams the war has shattered. If they cared, they would stop fighting.”

China, which like India had abstained on the two substantive resolutions on Ukraine, voted this time with Russia.

Although it may be interpreted as signalling a slight shift in its position of not directly backing Russia at the UN, Beijing’s Permanent Representative Zhang Jun also said: “On Ukraine, China has always insisted that the sovereignty and territorial integrity of all countries should be respected.”

He said that China was voting for it because the top priority is to prevent large scale humanitarian crisis.

The Mexico-France draft resolution failed to “transcend political differences” and seek a consensus, he said.

India will again be made to take a stand on the Russian invasion when the Ukraine resolutions come to a vote in the Assembly.

New Delhi has faced pressure from the US and its allies to side with them against Russia, but has also met with a measure of understanding over its extreme reliance on Moscow for defense needs on which depend India’s role in the Indo-Pacific to counter China’s aggressiveness.

While US President Joe Biden called India’s stand on Russia “somewhat shaky”, State Department Spokesperson Ned Price has explained that New Delhi’s reliance on Moscow came about when the West was not prepared for deep defense ties with it.

Despite that, “we are a partner of choice for India now, as are many of our partners and allies around the world”, he said.

Biden’s Spokesperson Jen Psaki also said that the US recognized that India had “different economic reasoning” for buying Russian oil.