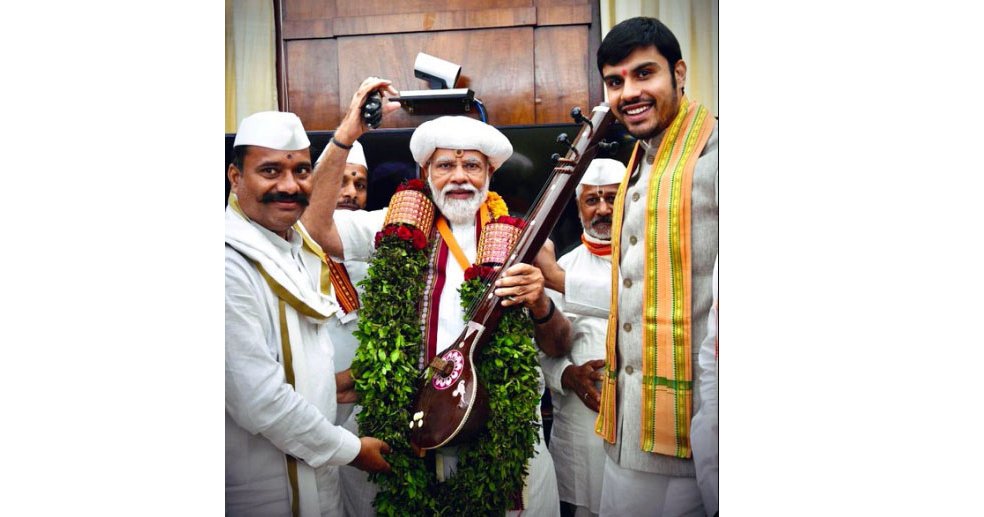 NEW DELHI (IANS) – A delegation of devotees from the Bhakti tradition of Maharashtra, including descendants of the 17th century saint, Sant Tukaram, met Prime Minister Narendra Modi on Mar.30 to thank him for identifying a designated road for the annual pilgrimage on foot to Pandharpur.

Modi had recently attended the Bhoomi Pujan ceremony in Pune of Palkhi Marg for the annual pilgrimage on foot to Pandharpur, called Wari.

Lakhs of devotees walk every year to Pandharpur with palkhis of Sant Tukaram and Sant Dnyaneshwar among others from different places, all headed to reach Pandharpur on Aashadhi Ekadashi, generally falling in June. Those who walk are called warkaris.

As per the warkari tradition, PM Modi was offered a headgear akin to Sant Tukaram, a traditional stole, Veena, chipalya (a clinky single hand-held musical instrument) to wear and gifted a tulsi mala and a copy of Tukaram Gatha, a compendium of Sant Tukaram’s couplets).