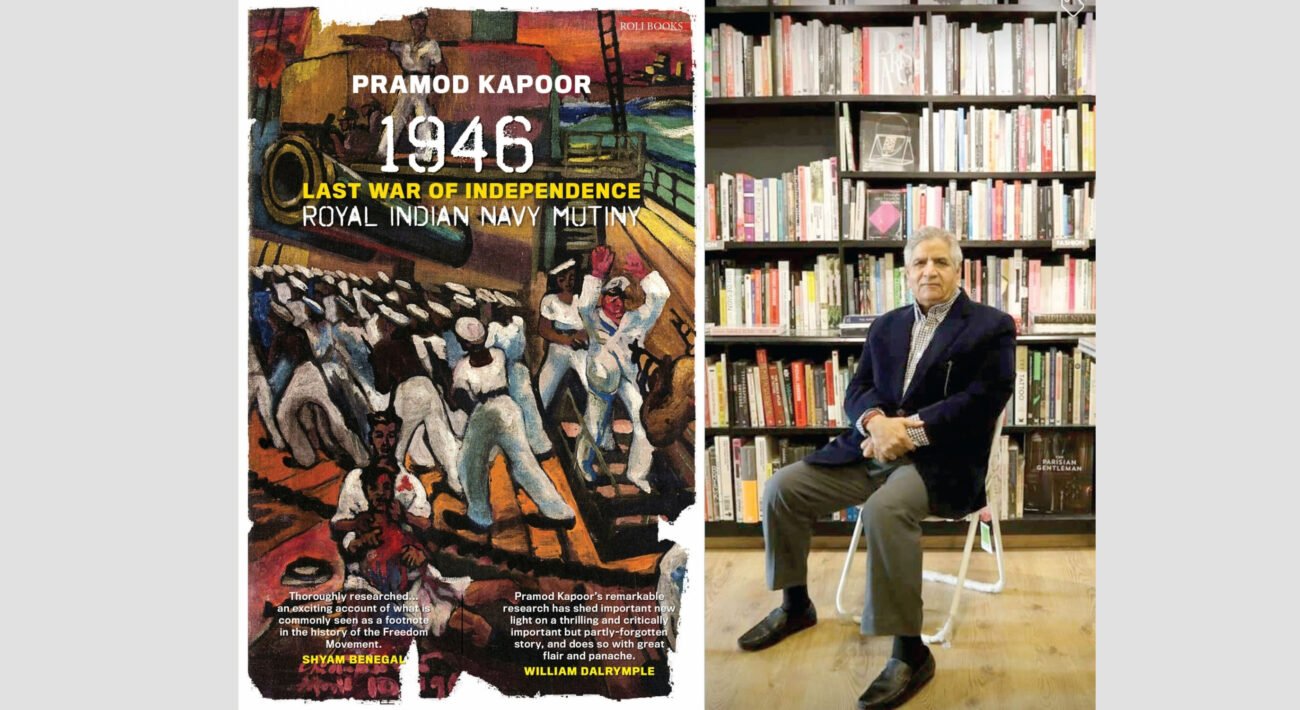 NEW DELHI (IANS) – Its undercurrents had been simmering for long but were ignored. When it finally erupted at Bombay on Feb.18, 1946 over terrible service conditions, racism and broken recruitment promises, the Royal Indian Navy Mutiny spread like wildfire across the country, from Karachi to Calcutta, as 20,000 men took over 78 ships and 21 shore establishments, replacing British flags with the entwined flags of the Congress, the Muslim League, and the Communists.

Although the uprising was put down with considerable violence, it actually hastened the process of Indian Independence as the British reaction was knee-jerk – a Cabinet Mission to discuss the transfer power to Indian stakeholders was announced barely 24 hours into the mutiny, says an extensively researched book on the revolt, which laments that the top leadership of the freedom movement turned their backs on the mutineers as they feared they would be overshadowed and that the entire episode has been virtually pencilled out of history and has “never been given the importance it deserved”.

“Although the mutiny ended quickly, the British realised that fateful week in February marked the beginning of the end for their nearly two centuries of rule. After this incident and the INA trials, the British felt they could never again rely on Indian ‘faujis’ to help put down another insurrection,” Kapoor writes.

The uprising “threatened to engulf all three arms of the defense forces and the world was also watching this colossal revolt. It had all the elements necessary to administer a final push towards toppling the Raj,” he adds.

A weekly intelligence summary of Mar. 25, 1946 admitted that units of the Indian army, navy and air force were no longer trustworthy, and for the army “only day to day estimates of steadiness could be made”.

“If it came to the crunch where widespread public unrest took shape, the armed forces could not be relied upon to support counter-insurgency operations as they had during the Quit India Movement of 1942. The mutiny was therefore deemed as a ‘point of no return’,” Kapoor writes.

The politicians of the Congress and the Muslim League “did not, however, emerge from this episode with any credit” and the role of established politicians during this episode “can only be described as inglorious. They actually helped the British put an end to the uprising, despite widespread sympathy for the ratings across the nation”, Kapoor writes.

“The Indian National Congress, which had led the freedom movement for over four decades, was unwilling to risk rocking the boat at a time when independence seemed imminent, through non-violence rather than revolt,” he adds, noting that Sardar Patel and Mohammad Ali Jinnah “helped persuade the ratings to surrender, and the politicians later reneged on their promises to protect the mutineers from punitive action”.

Only the Communists and some of the Young Turk socialist elements of the Congress, among them Aruna Asaf Ali, “backed the revolt”, the book says.

Even Mahatma Gandhi “in an obvious reference to the united revolt, condemned what he called ‘the unholy combination of Hindus and Moslems for a violent purpose’. ‘I might have understood it if they had combined from top to bottom. That would, of course, have meant delivering India over to the rabble. I would not want to live up to 125 to witness that consummation. I would rather perish in flames’, he wrote in ‘Harijan’ on 7 April 1946”, the author states.

Sadly, Kapoor writes, “the role of the young ratings, some of them just teenagers, in bringing about ‘azadi’ has never received appropriate acknowledgement. This momentous event…which shook the foundations of the empire, was largely edited out of our pre-independence history, and has never been given the importance it deserved”.

While the events of 1857 “may be called the First War of Independence, the 1946 uprising by naval ratings was the last”, Kapoor writes, adding: “I also strongly believe that Partition would have been less bloody if the political leaders had tried to build upon the communal unity created by the events of February 1946, instead of ignoring it.”

Even more telling, the author writes, is the fact that after Independence, “successive Congress governments in India and Muslim League governments in Pakistan refused to re-employ these men in the services, or even acknowledge them as freedom fighters. Every effort was made to blot out the memory of the mutiny post-Independence. Even two decades later (in 1965), plays like ‘Kallol’ (by Utpal Dutt, who was arrested in September 1965 and released only in March of the following year) faced obstruction and unofficial censorship)”.

While the Congress did not succeed in bringing down the curtain on “Kalook”, which was highly critical of the Congress and Muslim League, “depicting famous politicians as duplicitous” with Utpal Dutt deploying his “gifts of satire masterfully, ridiculing stalwarts like Pandit Jawaharlal Nehru and Sardar Vallabhbahi Patel”, it did succeed, over the decades, “in downplaying mentions of one of the most important and seminal events of the Independence struggle”, Kapoor writes.

“Instead of being enshrined in public memory alongside the Salt March, Jallianwala Bagh etc, the naval mutiny of 1946 tends to be relegated to just a footnote, except in scholarly works by historians, for the benefit of other historians,” the author asserts.

Belying the old adage that “history is written by the winner”, the history, “in this case was never allowed to be written in detail. The ratings found themselves trapped between two sets of rulers: one hoping to leave with their reputation and discipline intact, and the other in a tearing hurry to take over the reins of governance. Recording of this event in all is dimensions for posterity was not in the interest of either”, Kapoor writes.

To be fair, the Indian Navy, has not remained entirely silent on the episode.

It maintains a Naval Uprising Memorial in Colaba in South Mumbai where the bulk of its shore establishments are located.

The legacy of HMIS Talwar, the shore-based signals training school in Colaba, from where the revolt had begun, was carried forward with the commissioning of a Type 12 frigate on April 26, 1960 that participated in the Liberation of Goa and the India-Pakistan war of 1971. With her decommissioning in 1965, her namesake, a Type 1135.6 stealth guided missile frigate and the lead ship of her class, was commissioned on June 18, 2003 and continues to serve in the Western Fleet of the Indian Navy.

And, a state-of-the-art auditorium has been named Talwar Hall at the Indian Navy Signal School that now functions from Kochi.

Will the RIN mutineers also finally get their due?