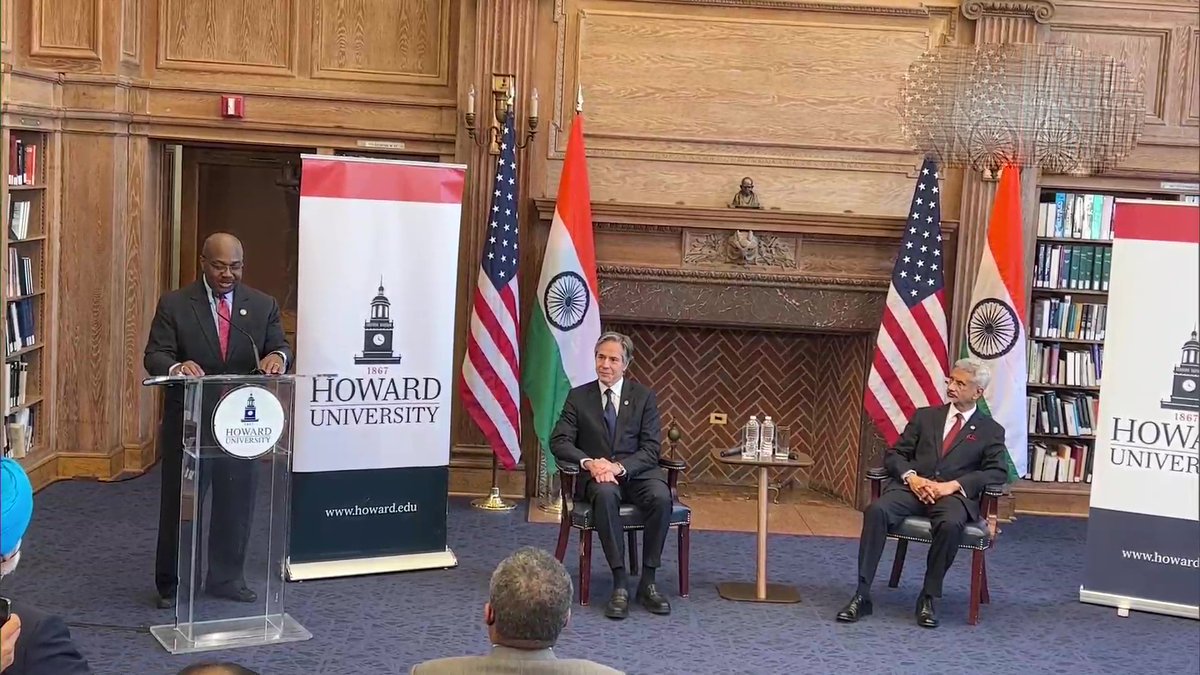 WASHINGTON, DC (ANI) – Underlining the transformation in India-US ties in the last two decades, External Affairs Minister Dr S Jaishankar on April 12 said that a key driver in this change has been the human element which includes 4.4 million Indian diaspora that has defined India’s image in US society.
He made these remarks during an event at Howard University for India-US Education Collaboration. US Secretary of State Antony Blinken also delivered remarks and participated in a conversation with students, faculty, and leadership of Howard University.
Blinken and Jaishankar interacted with Indian students, scholars, and researchers and US students, scholars, and researchers who have studied, worked, or conducted research at an Indian higher education institution.

Blinken in his remarks recalled how Howard Thurman had travelled to India. “He was trying to find lessons from the country’s independence movement that might be relevant to the racial justice movement in the United States. Near the end of the trip, Thurman met with Mahatma Gandhi. They talked, the books record, for about three hours, covering a wide range of issues: segregation, faith, nonviolent resistance. The conversation and the trip made a lasting impression on Thurman. So when he came back to Howard, he developed his interpretation of nonviolence – not as a political tactic, but as a spiritual lifestyle,” he said.

“Howard University is not just a part of a shared past. It is very much part of the future that awaits us. As we contemplate that, a big part and role in that will be played by the relationship between the two countries and that relationship has undergone a real transformation in the last two decades whether it is our strategic or security cooperation or our economy or technology partnership, it is making its weight felt increasingly in world affairs,” Jaishankar said in his speck.

The minister noted that a key driver in this change has been the human element. “The 4.4 million Indian diaspora has literally defined our image in this society and helped forge relationships that are an enormous source of strength for us,” he said.
“At its center are students, academics, and professionals who have contributed to America’s progress even as they remained a bridge between the two societies,” he added.
Speaking about the India-US connect, Jaishankar said the most powerful symbol of the ties is the inspirational bond between Mahatma Gandhi and Dr Martin Luther King Junior. “That bond was forged through the relationship with Howard Thurman, the dean of the chapel and later by Dr William Stuart Nelson who was the dean of the school of the religion,” he added.
For India-US ties to grow, Jaishankar said that it is necessary that there is a better understanding of India and the world, on the part of young Americans.
This event was seen as an opportunity to build off Monday’s announcement during the 2+2 Ministerial of the formation of a ‘Working Group on Education and Skill Training.’