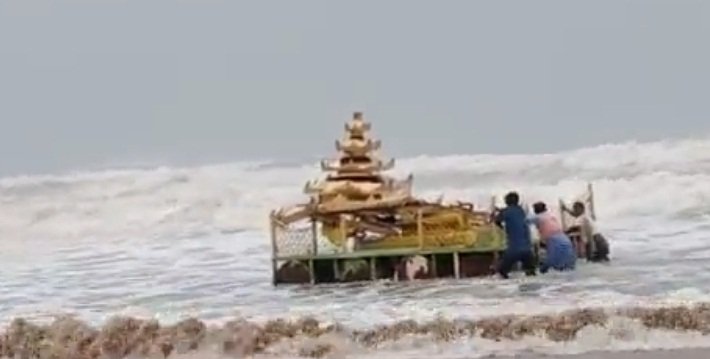 VISAKHAPATNAM, (IANS) – A gold-colored chariot-like structure, which washed ashore in Andhra Pradesh’s Srikakulam district on May 12, is believed to have come from Myanmar.

After a thorough check of the structure, which resembles the shape of a monastery and the inscriptions on it, local officials said it belonged to Myanmar.

The mysterious chariot was washed ashore at Sunnapalli coast in Santhabommali Mandal apparently due to turbulence in the Bay of Bengal under the impact of cyclonic storm ‘Asani’.

Local fishermen pulled it out of the water and since then it has aroused the curiosity of many.

The officials found that the script inscribed belonged to Myanmar. They also clarified that it is not a golden chariot but is merely golden colored. Locals including fishermen have requested the officials to allow them to turn the chariot into a temple for the village.

According to officials, a similar chariot had washed ashore a couple of years ago in Prakasam district and it was identified as the one which was swept away from Sri Lanka.