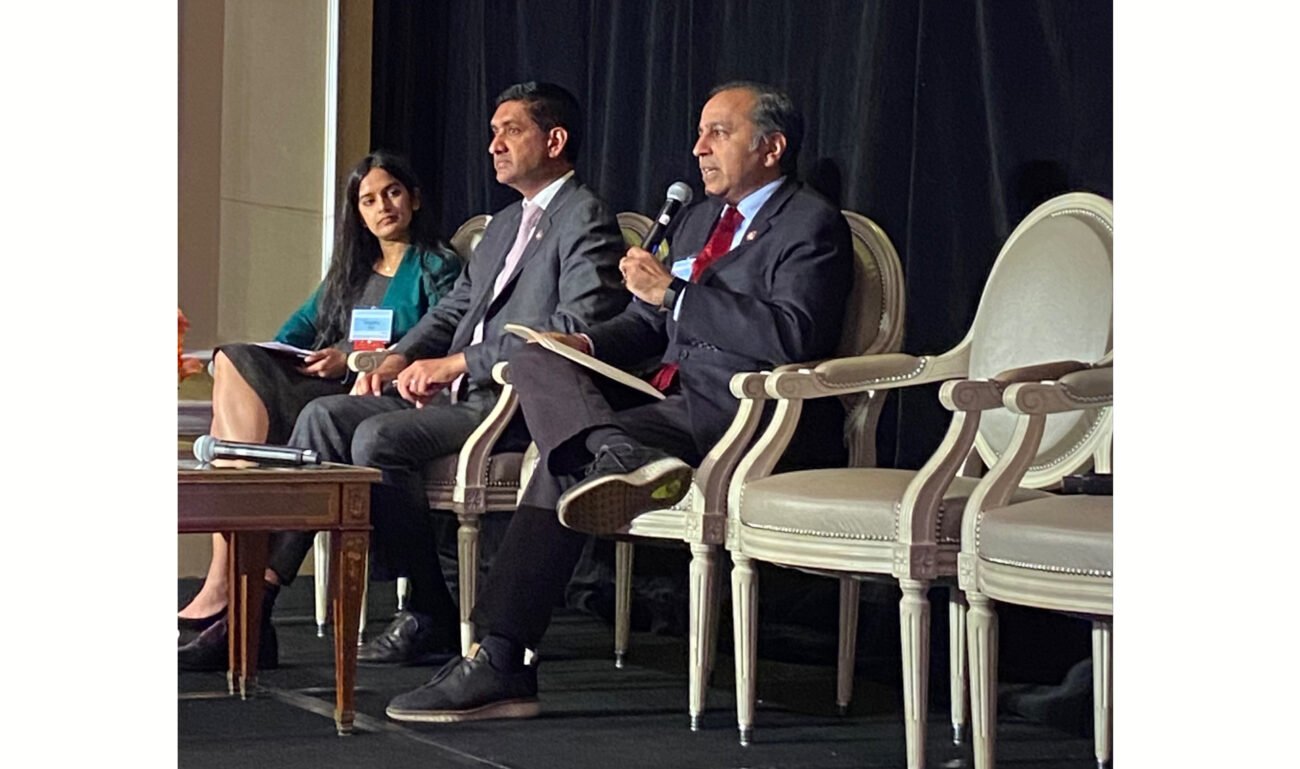 Congressman Raja Krishnamoorthi who attended the event, tweeted out this image and said, “Thank you to the Indian American Impact Project for inviting me to take part in their panel discussion on the importance of representation and public service, as well as the pressing issues that our country faces today.”

WASHINGTON, DC – At the Indian-American Impact Project ‘Dream with Ambition’ summit and gala held at the Willard InterContinental Hotel here, Vice President Kamala Harris praised the high powered attendees saying, “Every day, in communities across our nation, you are advancing equality, opportunity, and justice. You are inspiring the next generation of leaders, and in particular, the next generation of South Asian leaders.”

The opening event on May 18, had all four Indian American Congressional representatives in attendance – Raja Krishnamoorthi (D-IL), Pramila Jayapal, (D-WA), Ro Khanna, (D-CA) and Ami Bera, (D-CA) – along with several other philanthropists, businesspeople and public opinion leaders from the community.

In her pre-recorded speech, Harris made it personal tying back the theme of the event to her mother. “As you all know, when my mother was 19, she came to the United States from India to become a breast cancer researcher. She raised my sister and me to believe that we could be anything and do anything, if we set our minds to it. She taught us to ‘Dream with Ambition’ and so many of you gathered here today have something special in common. You see what can be unburdened by what has been.”

She continued, “Today my message to you is this — let us always remember, what brought us to this moment and continue to dream with ambition, continue to lead with conviction, continue to strive to do the impossible. Because you, and we all, are standing on the shoulders of so many who came before and living their dreams. Our nation is counting on you, on Impact, and all of us to lead us forward.”

Impact, in its press release, said that the event was aimed to energize and prepare South Asians, the largest growing voting bloc in the country, on how to join and engage the political system. Impact held a slew of informative sessions during the summit toward this end, including running for office, combating misinformation, and mobilizing the pan-South Asian community and women leadership.  It also focused on policy making and policy influence on the community including in the areas of climate, healthcare, civil rights and education.

Neil Makhija, ExecutiveDdirector of Indian-American Impact contended that historically, South Asians had been overlooked, underestimated, and underrepresented politically, “But after witnessing so many community members and future leaders come together this week, it is clear that is a thing of the past. Countless voices this week proved that our community is stronger when we collaborate and celebrate our intersectionality. It’s incredibly encouraging to imagine the possibilities for our collective futures,” he said.