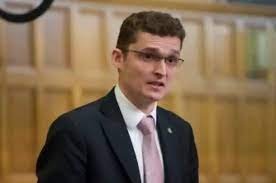 OTTAWA, (ANI) – Canadian MP Tom Kmiec recognized the rights of Sindhis to struggle against Pakistan for human rights abuses they commit on them.

Kmiec on June 17 supported the solidarity of the Canadian public for the Ottawa-Freedom Walk for Sindh’s human rights, climate change, environmental justice, and love for nature reached. “This walk brings awareness of minority issues in Pakistan,” said Kmiec.

Sindhi Foundation, a Sindhi rights group organized a protest rally in front of the Pakistani high commission and delivered a letter to Prime Minister Justin Trudeau regarding the human rights of the people from Sindh province of present Pakistan.

The participants of Freedom Walk for Sindh thronged the Pakistani High Commission to register their protest and to hand over a memorandum against human rights abuses of Sindhis to a High Commission senior official, but no one showed up to respond to the grave concerns and protest on the human rights situation in their own country.

The Freedom Walk for Sindh began in Toronto on May 28 and culminated at the capital Ottawa covering 424 miles on June 15.

Kmiec who has been demonstrating his solidarity with the Sindhi community visited the site of the rally and said he recognized the agonies of Sindhi people whose girls, are forcibly converted to Islam, and dissident youths have simply disappeared.

At the culmination of the Freedom Walk for Sindh, Sufi Munawar Laghari, the Chief Executive of the Sindhi Foundation said, “the Walk for Sindh has now global significance and the next destination will be the walk from British Parliament in London to the French Parliament in Paris, next year.”

Laghari declared that he was going to sit on a hunger strike in front of the United Nations at the 77th General Assembly session commencing from September 13 in New York.