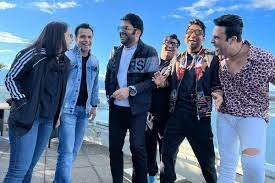 The ‘Firangi’ actor shared a series of pictures, where he could be seen smiling with all his crew members Sumona Chakravarti, Rajiv Thakur, Kiku Sharda, Chandan Prabhakar and Krushna Abhishek, giving proper squad goals. Sharing these pictures, Kapil wrote in the caption, “Crew that laughs together stays together!!”.

Fans flooded the comment section and dropped heart emojis, as all the crew members can be seen having a blast on their work tour.

The ‘Kis Kisko Pyar Karoon’ actor recently wrapped up the second season of his comedy talk show, where the star cast of ‘JugJugg Jeeyo’ arrived and had a blast with all the crew members and the audience.

The first ‘Kapil Sharma Live’ show is scheduled for June 25 here, following up with the second show on July 3 in Toronto.

Post Canada, the crew is going to visit the US for their upcoming live events.

Talking about the third season of the comedian’s chat show, the actor revealed that he will be back with the new season of the show after the US and Canada tour.