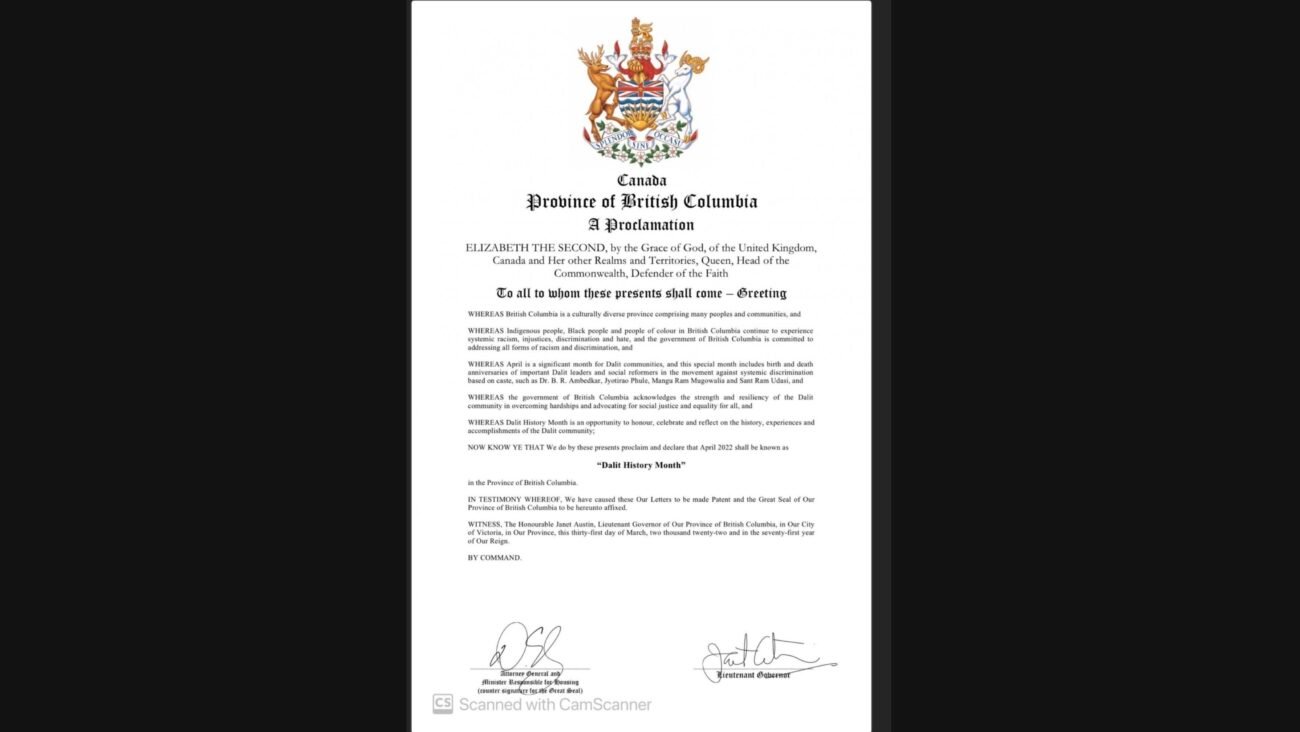 Responding to an application moved by Radical Desi, an online magazine that covers alternative politics, the provincial Attorney General and the Lt. Governor signed the proclamation declaring Apr. 2022 as Dalit History Month.

Since Apr. is the birthday month of Dr B.R. Ambedkar, it has a special significance for the Dalits across the globe.

Also, the month of Apr. is important because of the birth and death anniversaries of other Dalit icons, such as Jyotirao Phule, Mangu Ram Mugowalia and Sant Ram Udasi.

Both Ambedkar and Phule were born in Maharashtra.

Ambedkar, who was the architect of the Indian constitution and had fought against caste-based discrimination against his community, was born in Maharashtra on Apr. 14 in 1891.

He also stood up for the rights of the women and challenged Hindu supremacy.

Phule, who was a well-respected social reformer who had denounced untouchability, was born on April 11, 1827. He was known as an educator, who believed in scientific thinking and women empowerment.

Mugowalia and Udasi on the other hand hailed from Punjab. Mugowalia, who had participated in an armed resistance against British occupation of India, was instrumental behind Dalit emancipation movement in Punjab. He died on Apr 22, 1980.

Udasi was a revolutionary poet, who was born on Apr. 20, 1939. He was influenced by communist revolution and later became an inspiration for the poor working class and those resisting repression.

The British Columbia proclamation not only recognises these individuals, but also acknowledges “the strength and resiliency of the Dalit community in overcoming hardships and advocating for social justice and equality for all”.

Decreed in the name of Queen Elizabeth II, the proclamation noted that British Columbia is “a culturally diverse province comprising many peoples and communities”.

“Indigenous people, Black people and people of colour in British Columbia continue to experience systemic racism, injustices, discrimination and hate and the government of British Columbia is committed to address all forms of racism.”

Last year, the province celebrated the 130th birth anniversary of Ambedkar on Apr. 14 as ‘Equality Day’.