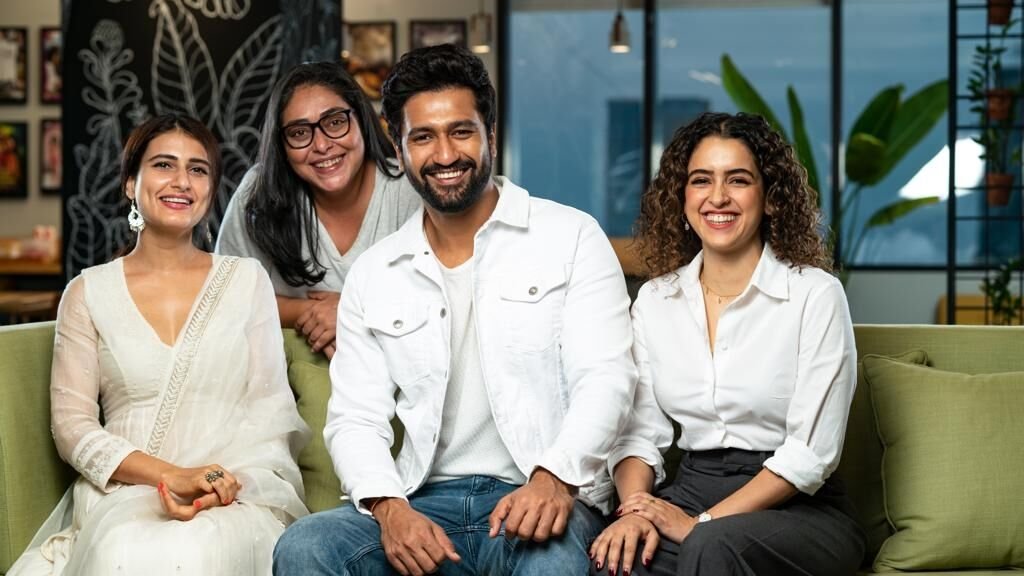 Fatima Sana Shaikh and Sanya Malhotra with the cast of ‘Sam Bahadur’. (photo via IANS)

MUMBAI — ‘Dangal’ duo Fatima Sana Shaikh and Sanya Malhotra have come on board for director Meghna Gulzar’s ‘Sam Bahadur’, which is based on the life of one of India’s greatest war heroes, late Army Chief Field Marshal Sam Manekshaw.

After ‘Dangal’ and ‘Ludo’, this will be their third film together. The announcement coincides with Meghna Gulzar’s birthday as the country approaches the 50th anniversary of the 1971 Bangladesh liberation war on Dec. 16.

Talking about the expansion of the ‘Sam Bahadur’ family, Gulzar says, “I have much to celebrate. There is pride in the commemoration of 50 years of the historic win of our forces in the 1971 war. And it’s very exciting to have Sanya Malhotra and Fatima Sana Shaikh join the team of ‘Sam Bahadur’. Both their roles in the film require a great deal of sensitivity, dignity and composure and I’m looking forward to the ladies bringing these characters to life.”

Malhotra talks about her inclusion, as she says, “Behind every great man is a woman and Silloo Manekshaw was that support and strength to Sam Bahadur. I’m honored to essay this role and bring to light her integral part and influence in this war hero’s life. I’m also extremely thankful to Meghna Gulzar and really looking forward to this exciting journey with her.”

Fatima Sana Shaikh adds to her co-star, saying, “I’m very happy to join the ‘Sam Bahadur’ family and take on the challenge of essaying the role of one of the most influential and talked about women in Indian history. What intrigued and excited me the most was the passion with which the makers hope to honor his memory and legacy through this film.”

Kaushal, who plays the titular character, says, “Sanya and Fatima with their characters bring more character and substance to the story of ‘Sam Bahadur’ and, I am very excited to be working with them together for the first time.”

“Their characters have been one of the most influential personalities we have heard about and now, the audience will witness the story of their valor, commitment and resilience. I welcome both of them to our Manekshaw family and look forward to sharing the screen with two of the most talented and diligent actors of our generation,” he adds.

Producer Ronnie Screwvala feels proud as the ‘Sam Bahadur’ tribe grows bigger, he says, “It’s a very special day for us as the ‘Sam Bahadur’ tribe grows bigger and we also celebrate the birthday of our director Meghna Gulzar. Manekshaw’s legendary status, in war and life, are fondly remembered and still remain relevant to this day. We are so excited to bring together some of the most talented actors who aren’t afraid to push the envelope or get into the skin of their characters to tell that story.”

Field Marshal Sam Manekshaw’s illustrious military career spanned four decades as he saw five wars. He was the first Indian Army officer to be promoted to the rank of Field Marshal and the decisive victory of the Indian Army in the 1971 Indo-Pak war was under his command as Chief of Army Staff.