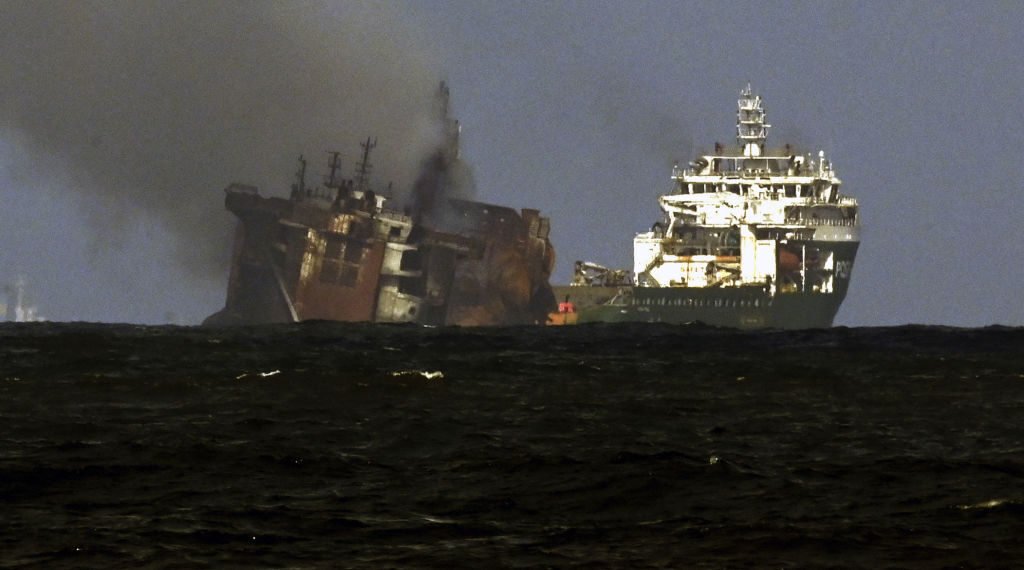 X-Press Feeders, operators of the container ship MV X-Press Pearl, said the experts were able to board the vessel and attach a tow line, but “efforts to move the ship to deeper waters have failed.”

“The ship’s aft portion is now touching bottom at a depth of 21 meters (70 feet),” while the forward area remains afloat with smoke coming out of two cargo holds, the company said in a statement.

Navy spokesperson Indika de Silva said the ship could cause severe pollution if it sinks at its current location off the port of Colombo.

The fire erupted on May 20 when the ship was anchored about 9.5 nautical miles (18 kilometers) northwest of Colombo and waiting to enter the port.

The navy believes the blaze was caused by the chemicals being transported on the Singapore-flagged vessel. It was carrying 1,486 containers, including 25 tons of nitric acid and other chemicals that were loaded at the port of Hazira, India, on May 15.

The blaze has destroyed most of the ship’s cargo. Some containers tumbled into the sea, polluting surrounding waters and a long stretch of the island nation’s famed beaches.

There are fears that hundreds of tons of oil from the vessel’s fuel tanks could also leak into the sea if it sinks, devastating nearby marine life.

Environmentalist Ajantha Perera said the incident could cause “a terrible environmental disaster.”

She said the ship is believed to have been carrying 81 containers of hazardous goods and about 400 containers containing oil.

“All these would mix with the sea water and would destroy the marine environment and would have an adverse impact on the fishing industry,” she said.

As a precautionary measure, the authorities reimposed a fishing ban along about 80 kilometers (50 miles) of the coast.

Charitha Pattiaratchi, a professor of oceanography at the University of Western Australia, said the ship was carrying 78 tons of plastic pallets called nurdles, a raw material used to make plastic bags.

Writing on his Facebook page, he said the incident had released “potentially close to 3 billion nurdles” into the ocean that are washing up on beaches.

He said the nurdles “will persist in the marine environment forever as they are not biodegradable.”

Sri Lankan police are probing the fire, and a court in Colombo on Tuesday banned the captain, the engineer and the assistant engineer from leaving the country. The government has said it will take legal action against the owners of the ship to claim compensation.

The vessel’s 25-member crew was evacuated last week after an explosion. They include Philippine, Chinese, Indian and Russian nationals.