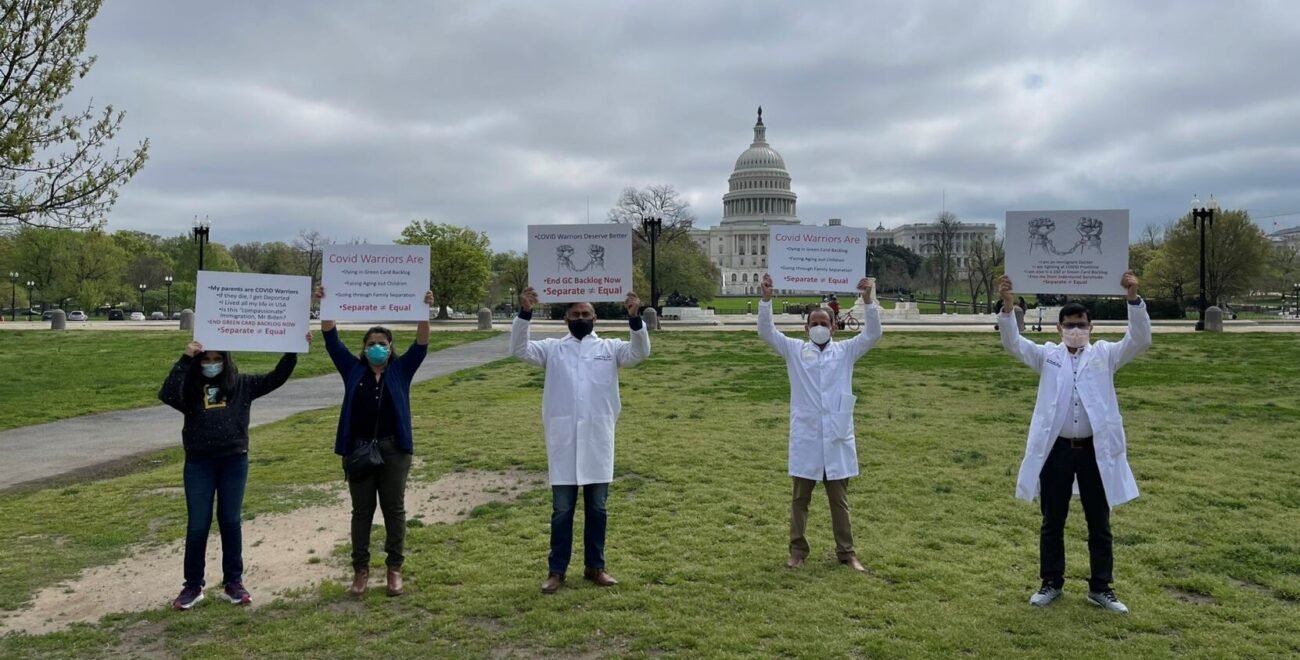 Indian American health care workers holding H-1B visas — many of whom are on the front-lines of the COVID-19 pandemic — began a protest April 12 in front of the U.S. Capitol in Washington, D.C., in an all-out effort to attain green cards by lobbying Congress to eliminate the per-country caps that have placed them in backlogged queues exceeding several decades.

The protests, organized by the ad hoc group Frontline Healthcare Workers in Greencard Backlog, are expected to continue until April 14. Similar demonstrations were held last month in front of the U.S. Capitol.

“President Joe Biden could end the green card backlog for health care workers right now, by executive order,” organizer Pranav Singh, a critical care physician in Mason City, Iowa, who has been waiting for his green card since 2012, told India-West. He noted there are less than 40,000 health care workers on H-1B visas, an insignificant number in the overall population. “They could easily be allowed permanent residency.”

H-1B workers are “indentured” to one employer until they get their green cards, noted Singh, who said he was offered posts at hospitals in New York and Texas during the height of the pandemic in those states, but could not accept the offers because of visa restrictions.

His daughter, who is 15, will age out of the system in three years and will either have to sponsor herself, which is nearly impossible, or return to India. “So we are facing family separation down the road,” said Singh, who, like many others stuck in the queue, is making plans to move to Canada.

Raj Karnatak, another organizer of the demonstrations, told India-West he and his wife have been waiting for their green cards for over a decade. “My wife and I both have aging parents in India. We live in fear of our visas getting rejected the next time we apply, or being stranded in India next time we visit our parents,” he said.

“We are fighting to save American lives on the front-line knowing that if we get sick or die, our families will get deported. We need immediate relief from the miserable green card backlog,” said Karnatak, an infectious disease and critical care physician working in Milwaukee, Wisconsin. Using current estimates, Karnatak said he will spend two lifetimes — 195 years — waiting for a green card.

H-1B visa holders — overwhelmingly from India — are eligible to apply for a green card six years after they have worked in the U.S. But per country caps only allot a maximum of 7 percent of the 140,000 available employment-based green cards to countries per year. Thus, Indian nationals can only receive 9,800 green cards each year. Their H4 dependent spouses and children are also in limbo: children age out of their dependent status once they turn 18: they must then attempt to port their immigration status to an F1 international student visa, or an employment-based visa. Barring that, they must return to the home country, even if they have lived in the U.S. for most of their lives.

Currently, more than 1.3 million Indian nationals with approved green card petitions are stuck in the queue, even as employment-based green cards go wasted each year.

Several congressional attempts have been made to eliminate the per country caps. Last year, Sen. Mike Lee, R-Utah, managed to get S 386 passed in the Senate last December, while Rep. Zoe Lofgren, D-California, got HR 1044 passed in the House in 2019. Both versions of the bills must now be reconciled.

Lofgren has stated that she will not support Lee’s version of the bill. “While I recognize the sincerity of all members struggling to find solutions, unfortunately the provisions sent to the House by the Senate most likely make matters worse, not better,” she tweeted Dec. 2, 2020.

“These immigrant doctors and nurses have been fighting to save American lives, living in the U.S. for decades, paying taxes, contributing to the economy but they have no right to participate in any kind of democratic process,” read the petition.

“We have been serving in this pandemic to the sickest of Americans with COVID-19. Working in COVID-19 intensive care units or in the hospital wards day and night is no less than working in a war zone,” read the petition, noting that health care workers have risked their own lives to save their patients.

“We spent days and nights inside patient rooms discussing the disease and many times performing lifesaving procedures, knowing that if we become sick or die our family will get deported,” read the petition, which had been signed by more than 700 people, as of April 13 evening.

At a White House press briefing March 24, PTI reporter Lalit Jha asked White House Press Secretary Jen Psaki how President Joe Biden might respond to the concerns of front-line workers who currently have no prospects for permanently remaining in the country.

“The president would reiterate that he believes there should be faster processing, that he believes our immigration system is broken on many levels, and that he is eager for Congress to move forward on this issue,” Psaki replied.