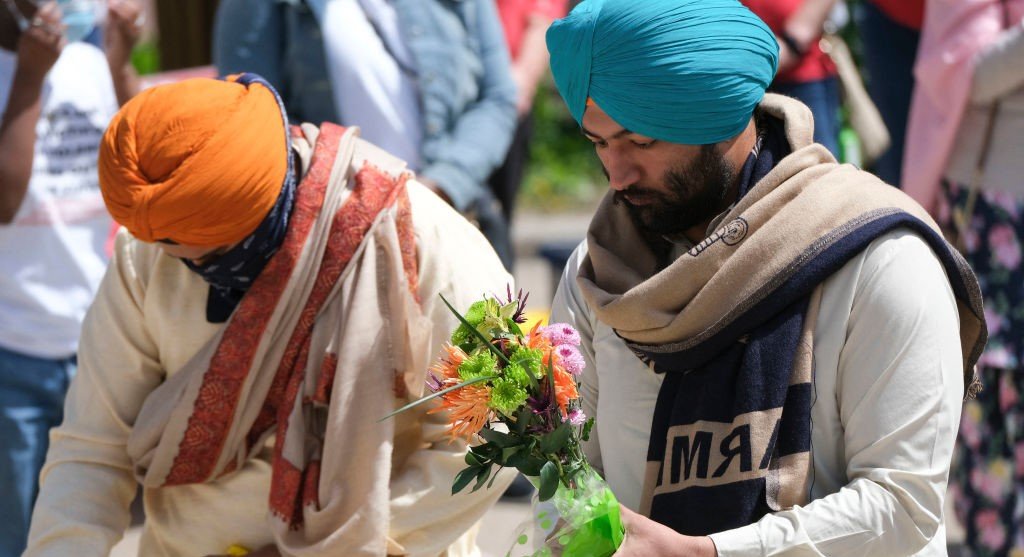 Family, friends and community members attend a vigil in Indianapolis, Indiana on April 18 to remember the victims of a mass shooting at a local FedEx facility which took the lives of eight people, including four Sikh Americans. Indian American organizations raised questions about whether the gunman’s motivation was in any way racially or ethnically motivated. (Jeff Dean/AFP via Getty Images)

Organizations and individuals across the U.S. collectively grieved with the Sikh American community following the April 15 mass shooting at a FedEx facility in Indianapolis, Indiana, at which eight people were killed, including four Sikhs.

Indian American organizations and others called for an investigation of bias motivation in the deadly shooting. The suspected gunman, 19-year-old Brandon Hole, a former FedEx employee who was terminated in October 2020, used two rifles to kill four people in the parking lot, before entering the facility and killing four others before turning the gun on himself, police said.

Hole was known to law enforcement: police had visited his home in March 20, after his mother phoned to say her son was intent on committing “suicide by cop.” In his interview with police, Hole said he had bought a gun so that police could shoot him. The gun was confiscated and Hole was sent for psychiatric evaluation, but he was nonetheless able to purchase two rifles later that year, the weapons he used in his deadly rampage.

The IMPD said Hole on April 20 had visited White supremacist web sites for at least a year before the attack. The Sikh Coalition sent letters to law enforcement officials and state and federal lawmakers, advocating for the incident to be investigated as a hate crime.

“The reality is, even if Mr. Hole was a disgruntled employee due to the fact that Sikh employees were getting more hours than him or for any other reason, it is essential to connect the dots of all of his activities leading up to this tragic attack to fully understand the role racism, xenophobia, and white supremacy may have played in his alleged anger toward his former employer,” said Amrith Kaur, Sikh Coalition legal director, in a press statement April 20.

Rep. Raja Krishnamoorthi, D-Illinois, has also called for the mass shooting to be investigated as a hate crime. (see main story)

South Asian Americans Leading Together issued a statement expressing solidarity with the Sikh community. “We are struck by the trend of violence against immigrant workers, who have not only taken on essential work during a global pandemic, but have also been particularly vulnerable to its health and economic consequences as a result of their work. SAALT stands in solidarity with immigrant and essential workers, and honors the care they have poured into our community despite widespread bigotry,” said the organization in a statement.

“Of utmost importance are those left behind tending to both their physical wounds and the deep trauma of having to return to a workplace and community where fellow community members were so tragically taken.”

“Such an act of mass violence sends reverberations across Sikh and South Asian communities, evoking past pain and grief rooted in decades of similar violent acts,” said SAALT, referencing the Aug. 5, 2012 deadly attack on a gurdwara in Oak Creek, Wisconsin, at which Wade Michael Page, an avowed neo-Nazi, killed six Sikh Americans before shooting himself.

Seema Agnani, executive director of the National Coalition for Asian Pacific American Community Development, also called for a hate crime investigation. “The targeted FedEx facility heavily employed Sikh workers, and race must be considered as a motive in the investigation,” she said.

“It is clear that immigrants, communities of color, low-wage workers, and other vulnerable populations are not just the primary targets of violence motivated by hate, but also the victims of leadership that continues to ignore the urgency of stronger gun control laws, police reform, and confronting racism,” said Agnani.

Varun Nikore, executive director of the AAPI Victory Alliance, and several other organizations, called for stricter gun control measures. “It’s time to come together and end hate and gun violence once and for all,” he said, stating the organization’s mission to weed out members of Congress who do not support an overhaul of current gun laws.

“The senseless gun violence that we’re seeing in this country is reflective of all of the spineless politicians who are beholden to the gun lobby. They will be hearing from us: instead of offering thoughts and prayers, it’s time to mobilize for direct action and vote them out. We will end the violence, only when we have leaders who have the guts to do so,” said Nikore in a press statement.

President Joe Biden issued a statement April 16, also calling for stricter gun control measures. “I urge Congress to hear the call of the American people — including the vast majority of gun owners — to enact commonsense gun violence prevention legislation, like universal background checks and a ban of weapons of war and high-capacity magazines.”

“Too many Americans are dying every single day from gun violence. It stains our character and pierces the very soul of our nation. We can, and must, do more to act and to save lives,” said the president.