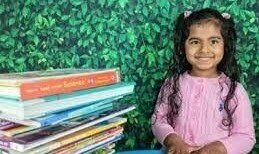 Kiara Kaur, an Indian American five-year-old girl, was born in the U.S. and currently resides in the UAE with her parents. (Twitter photo)

Earlier this year, an Indian American five-year-old girl, Kiara Kaur, who currently lives in the UAE, was recognized on an international level as being a prolific reader.

The youngster, who was born in the U.S., had read 36 books nonstop for over an hour, according to reports.

Now, Kiara has become the world’s youngest TEDx speaker, according to an NDTV report. The youngster was recognized by the World Book of Records in London after she addressed a TEDx meet organized by a group in Maharashtra on Nov. 14, Children’s Day.

“I am so excited to be the youngest TED speaker,” Kiara told NDTV.

Calling her a “child prodigy,” the World Book of Records in London had certified Kiara “for having specific ability to read non-stop 36 books in 105 minutes at the age of 4 years” on Feb. 13.

The Asia Book of Records acknowledged that she “set a record for reading maximum number of books nonstop,” reports added.

A passionate reader who has read more than 2,000 books, Kiara is also set to release her first book, “Dairy of a 5-Year-Old Genius Chatterbox Who Set World Records,” said the NDTV report.