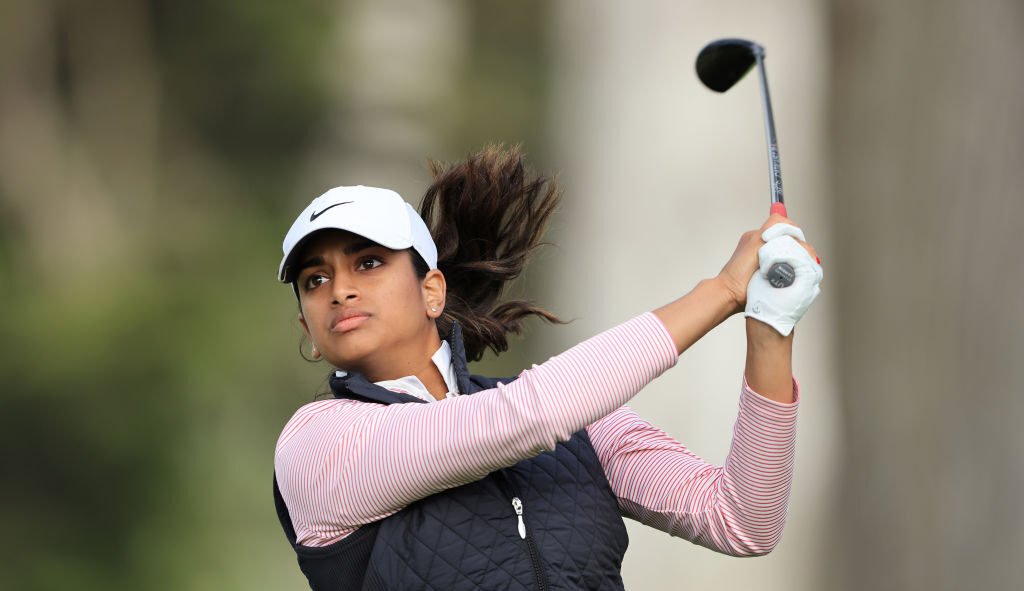 Megha Ganne hits her tee shot on the 18th hole during the first round of the 76th U.S. Women’s Open Championship at The Olympic Club on June 3, 2021 in San Francisco, California. (Sean M. Haffey/Getty Images)

SAN FRANCISCO — High school junior Megha Ganne shot a 4-under 67 on June 3 to become the first amateur in 15 years to have a share of the lead after any round at the U.S. Women’s Open.

The 17-year-old Indian American golfer from New Jersey made back-to-back birdies on the back nine to take sole possession of the lead before making bogey on the 18th hole to end the day in a tie with Mel Reid on the Lake Course at the Olympic Club.

Ganne needed a playoff last month to qualify for her second career U.S. Open but felt much more comfortable once she got here than she did two years ago when she missed the cut.

“I think the first time is nerve-racking for anybody and meeting your idols and being on the stage for the first time,” she said. “But the second time around, even the practice rounds, I wasn’t as nervous. I felt like I could come here and just play my game instead of soaking that all in.”

She did just that up the road from Stanford where she plans to go to college after graduating high school next year. She birdied three of the first eight holes and made three more on the back nine to overcome a pair of bogeys.

She made one of her few mistakes on 18 when she hit her approach shot into a greenside bunker.

The notoriously tough Lake Course played a little easier than usual after the rough was trimmed a bit before the round. Fifteen players shot under par with Canada’s Brooke Henderson, and Americans Angel Yin and Megan Khang one shot back. Henderson three-putted from less than 20 feet on the 18th hole to fall out of a share of the lead.

Other notable players include defending champion A Lim Kim of South Korea, who struggled at 6 over, and 2014 champion Michelle Wie West, who shot 74.

This marked the first time the women came to the Lake Course overlooking the Pacific Ocean for a major. But this venue has a rich history for the men, hosting five U.S. Opens and three U.S. Amateurs among other events.

She has been playing golf for a long time but started her professional career in her high school junior year. She competed in the 2017 U.S. Women’s Amateur and the 2018 U.S. Women’s Four-Ball Championship. In 2019, she played the U.S. Women’s Open in Charleston.