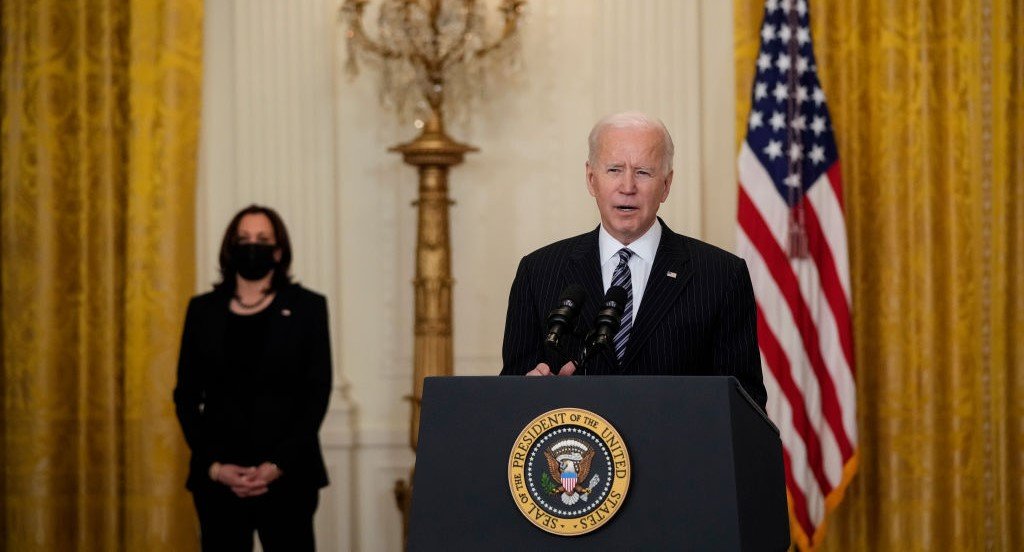 President Joe Biden speaks in the East Room of the White House on March 18, 2021 in Washington, DC., as Vice President Kamala Harris looks on. Biden announced that his administration will have met his goal of administering 100 million COVID-19 vaccine doses in 100 days on March 19, 58 days after taking office. (Drew Angerer/Getty Images)

NEW YORK – President Joe Biden wants Congress to act on immigration reform that would allow Indian American doctors and other professionals to expeditiously get their green cards, according to his spokesperson Jen Psaki.

“He believes that there should be faster processing, that our immigration system is broken at many levels,” she said at a briefing March 24.

“He is eager to for Congress to move forward with action there.”

Psaki was replying to a question about a demonstration in Washington, D.C., by Indian doctors who had been in the frontlines of the fight against the Covid-19 pandemic, asking for the elimination of country quotas for green cards that would enable them to get permanent residence status faster.

Asked about the delays in processing work authorization for spouses of those holding H1-B and L-1 visas, Psaki said: “The reason we want to push for action on immigration (legislation) on the (Capitol) Hill is to move forward with expediting the processing and doing that on several levels, including a number of the visas.

“That’s part of the reason why we think that’s such an important piece to move forward on.”

A group of Indian doctors held a demonstration outside Congress last week demanding the removal of the country quotas to expedite their green cards.

Last month, Democrats introduced a comprehensive immigration reform bill in Congress that would remove the country quotas for green cards.

While spouses of citizens are not restricted by the quotas, all other countries except Canada and Mexico are each allowed only 26,000 green cards each year and this has created a huge backlog for applicants from countries like India, while some nations do not use their full quota.

According to the State Department, Indians with advanced degrees whose immigration applications were approved in 2009 and skilled workers and professionals whose applications were okayed in 2010 are still waiting for their green cards.

Those wait times are only for those whose applications are already approved, and it could run to centuries for those in the immigration queue.

The immigration reform bill faces an uphill battle because Republicans demand that it include stringent restrictions on illegal immigration and the backing of some members of that party would be required in the Senate.

Earlier, legislative action to remove country caps failed in the last Congress because the Senate and House of Representatives versions of the bill had differences that were not reconciled in time and it lapsed.

The Senate in December 2020 and the House in 2019 had passed the separate versions of the bill.

Their spouses had been allowed to work in the U.S. under regulations introduced by former President Barack Obama, but his successor Donald Trump had tried to ban work authorization for them.

In its first week in office, the Biden administration killed Trump’s effort and continued to make the spouses, most of them Indian women, eligible to get work permits.

The San Jose Mercury reported last month that the Citizenship and Immigration Service had attributed the work authorization “delays to ‘Covid-19 restrictions, an increase in filings, current postal service volume and other external factors’.”

The newspaper added that the agency said that it had redistributed workloads and staff were working extra hours to reduce the delays.