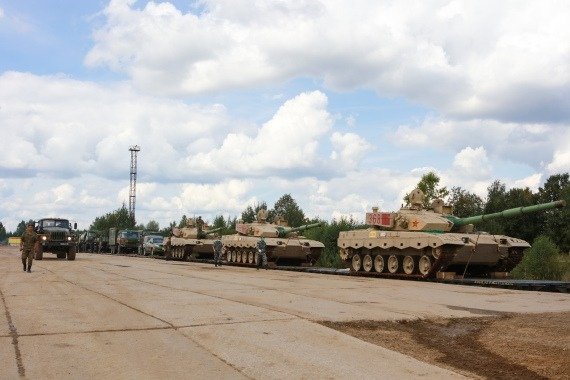 Of late, China has raised security concerns in the Indian Ocean region with strategic military sales like submarines to Bangladesh and Pakistan. China contends to be a key defense exporter to many Asian and Southeast Asian countries in India’s neighborhood.

Many of these countries, who are unable to acquire expensive military technology from other reliable sources, procure seemingly inexpensive weapons and systems from the Chinese market.

To this effect, the Bangladesh military imported two Type-035G submarines of 1970s vintage and Type-053H frigates from China, with its import dependence on Chinese hardware touching nearing 85 percent.

Myanmar, after the military coup in 2021 and sanctions by the West, has turned towards China for procuring majority of its military hardware.

Pakistan is shifting its reliance to cheap Chinese hardware with its procurement of Yuan class submarines, J-10/JF-17 fighter’s aircraft and Type-054 stealth warships.

Sri Lanka has been given warships and military aircraft (Harbins, J-7) in recent times. Nepal is also being aggressively pursued by China in the recent years for procuring Chinese military hardware with NPR 2.5 billion grant for the Nepalese Army.

The new entrant in this club is Pekua port in Bangladesh. China plans to develop this port and offer it for berthing and maintenance of submarines given to Bangladesh. However, its real intent might be to establish a transit base for its nuclear submarines, which are likely increase their forays in the Indian Ocean region in the future. Hence, if we envisage a conflict with China or our neighboring countries, we can anticipate that stance of these countries will be largely driven by Chinese interest in the region.

However, everything is not so rosy for Beijing’s customers as it seems. They, at their own peril, however, do not factor the life cycle costs and reliability factors of Chinese products.

Poor quality and workmanship of these Chinese military weapons and systems has turned out to be the bane for its clients. Countries like Pakistan, Bangladesh, Sri Lanka, Thailand and Nepal has found this out the hard way.

Beijing has supposedly requested modification in the contract to replace the German engines with Chinese MWM 620 engines.

Considering the poor reputation related to anything Chinese made, the Thai don’t appear willing to go ahead with the deal unless their demands are met.

Earlier in January, Nepal Airlines had grounded six Chinese-made aircraft, saying that it was proving to be unaffordable to fly them. These sub-standard planes delivered extremely poor serviceability rates and required heavy maintenance.

The loan from China for these aircraft has, however, continued to haunt the airlines. Dues worth $35.1 million, at a steep interest rate along with a service charge and management expenses, are still pending.

Beijing had gifted two 1970s era Ming class Type-035G submarines to Bangladesh valued at $100-million each in 2017. These were later re-inducted by the Bangladesh Navy as BNS Nobojatra and BNS Joyjatra.

However, both the platforms have been lying idle due to technical issues and could not be used as intended. The year 2020, witnessed China gifting Dhaka with two Chinese 053H3 frigates — BNS Umar Farooq and BNS Abu Ubaidah.

According to sources, the Type-053H3 frigates gifted to the Bangladesh Navy have defects in fire control system as well as in the helicopter fuelling and defueling system.

Defects have also been discovered in the gyro compass. The frigates were supplied by Poly Technologies Inc. Poly Technologies is a subsidiary of China Poly Group Corporation, a trade company with headquarters in Beijing, which deals with missiles and other military hardware.

With regard to naval platforms built by China Shipbuilding and Offshore International Co. Limited, issues that have surfaced are poor metallurgy, lack of spare part support, machinery failure, defective radars and poor armaments.

Pakistan, despite being closest to Beijing, has also faced similar issues. Pakistan armed forces, which have been traditionally used to superior quality products made in the West, has had to deal with defective military equipment supplied by China.

The Chinese-supplied WL II UCAVs was grounded within days of induction into the PAF due to serious defects. A similar story has emerged with the joint production JF-17 fighters.

As per reports, approximately 40 aircraft are not airworthy due to a shortage of spare parts and the RD-93 engine have reportedly experienced frequent cracks in guide vanes, exhaust nozzles, and flame stabilizers.

The Chinese are desperately trying to replace the existing engine with the Chinese made WS-13 engines. However, when these will be made available to Pakistan remains the moot issue. Similar is the case with the SAM system on the Zulfiqar class frigate procured through a multi-million-dollar loan from the Chinese EXIM Bank.

The system, itself a clone of the French Crotale system, has been plagued with serviceability issues leading to the Pakistan Navy turning to European suppliers for future inductions.

Other cases of supply of poor-quality drones, armoured personnel carriers, missiles and even warships across the globe are well documented.

In some cases, loss of lives due to malfunctioning equipment have also been reported. The lack of quality of military hardware from China is increasingly coming under scanner and has brought to fore the substandard capabilities being sold to economically weaker countries in the garb of supporting them.

The world over, reliability and quality of defence equipment are known as the true mark of a nation’s technology, manufacturing ability and maintenance practices.

One would have expected Chinese defence manufacturers to have taken this onboard as an inviolable fundamental. If one is to believe open-source narratives, here too China seems to have missed the mark entirely, opting for quantity and quick delivery over quality.