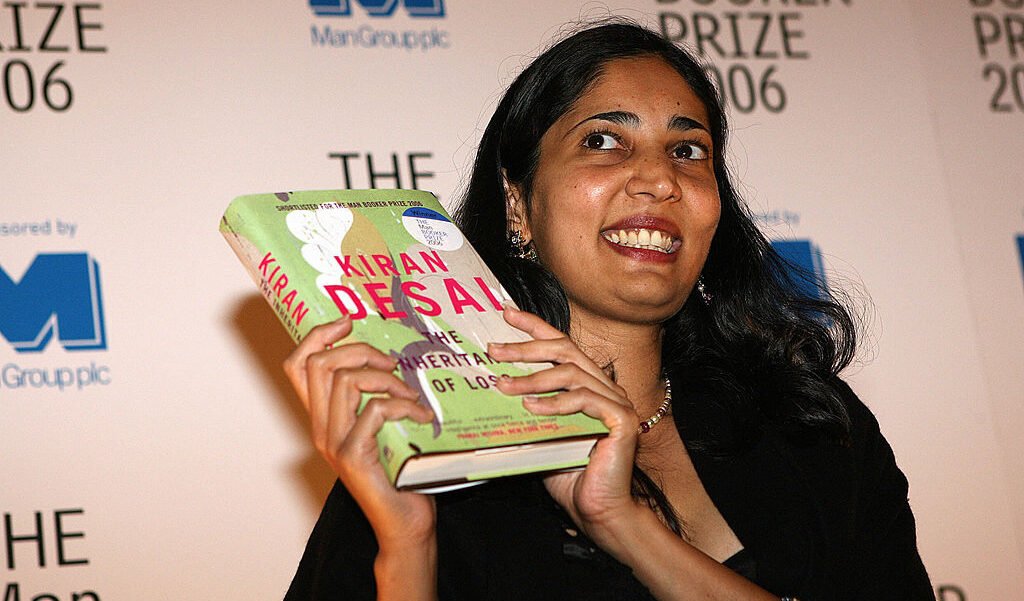 File photo of Booker Prize winner Kiran Desai, who wrote “The Inheritance of Loss,” celebrating after the awards ceremony at the Guildhall in London, on Oct. 10, 2006. Desai was one of 11 Indian American authors named to USA Today’s 2021 Best-Selling Books list. (John D. McHugh/AFP via Getty Images)

USA Today May 30 unveiled its Best-Selling Books list, with dozens of Asian American Pacific Islander writers among the group honored, including 11 Indian Americans.

From memoirs and fiction to romances and humor, their works are as diverse and dynamic as the authors themselves. AAPI authors represent an important part of the ever-expanding and evolving American literary canon, USA Today wrote in its report.

“We’ve curated a sampling of 40 AAPI authors who have appeared on our bestseller list. Authors range from debut to stalwarts and write in a variety of genres. While they are not the only AAPI authors who have made our list, we hope this list leads readers to explore more of the wellspring of books and literature by Asian American and Pacific Islanders,” it said.

The India-born author Desai relocated to the U.S. as a teen with her writer mother, Anita Desai. Her first novel, “Hullabaloo in the Guava Orchard,” garnered good reviews but it was her second novel, the Booker Prize-winning “The Inheritance of Loss,” that made the bestseller list, the report said.

The neurosurgeon, reporter and writer Gupta first hit the bestseller list in 2007 with his book, “Chasing Life: New Discoveries in the Search for Immortality to Help You Age Less Today.” He returned in 2012 with novel “Monday Mornings” and in 2021 with “Keep Sharp: Build a Better Brain at Any Age,” USA Today said.

Vice President Harris was also a USA Today bestselling author with two books on our list. The first, “The Truths We Hold: An American Journey,” explores her life as the daughter of immigrants. Her parents emigrated from India and Jamaica and raised Harris and her sister Maya in California. Her second bestseller, “Superheroes Are Everywhere,” is a children’s book that tells kids heroes can be found anywhere and they too can be one, the report noted in a blurb.

A lawyer, entrepreneur and author, Meena Harris is also the niece of Vice President Kamala Harris. She hit the list recently with two children’s books: “Kamala and Maya’s Big Idea,” inspired by a true story of sisters Kamala and Maya Harris as children working with their community to effect change; and “Ambitious Girl,” about a young girl who sees the challenges faced by women when she sees a strong woman labeled as “too assertive” and “too ambitious,” the report noted.

Actress, humorist and writer Kaling wrote two bestselling collections of essays: “Is Everyone Hanging Out Without Me? (And Other Concerns)” and “Why Not Me?” Both books include her observations on life, romance, friendship and Hollywood, the blurb said.

The daughter of Indian immigrants who emigrated to the U.K., Lahiri moved to the U.S. with her family when she was 3 and was raised in Rhode Island. Most of the author’s notable works have been USA Today bestsellers, beginning with her Pulitzer Prize-winning debut collection of short stories, “Interpreter of Maladies.” Other bestsellers include “The Namesake,” “Unaccustomed Earth,” “The Lowland” and this year’s “Whereabouts,” an English translation of a story she originally wrote and published in Italian, the publication said.

Mirza’s debut novel, “A Place for Us,” hit the bestseller list in 2018. Readers follow the story of an Indian Muslim family in California on the eve of their eldest daughter’s wedding. The novel was also the inaugural novel in Sarah Jessica Parker’s imprint SJP for Hogarth. In an interview on the “Today” show, Mirza shared that “growing up I never saw a life like mine reflected in fiction and so to me to write this novel was a way to honor the place that I’d come from,” the report said.

The Indian American physician Mukherjee, who is also an assistant professor of medicine at Columbia and a cancer researcher, won the Pulitzer Prize for his bestselling nonfiction work, 2010’s “The Emperor of All Maladies: A Biography of Cancer.” It was later made into a documentary of the same name by Ken Burns. He followed “Emperor” with another USA Today bestseller, 2016’s “The Gene: An Intimate History,” it said.

The daughter of a Filipina mother and South Indian father, the prize-winning poet and Guggenheim Fellow Nezhukumatathil published her nonfiction debut “World of Wonders: In Praise of Fireflies, Whale Sharks and Other Astonishment” in 2020. The collection of essays about the natural world was a Kirkus Prize finalist and named 2020’s Barnes & Noble’s book of the year, the report noted.

An attorney, activist and founder-CEO of Girls Who Code, Saujani published “Brave, Not Perfect: Fear Less, Fail More, and Live Bolder,” which landed on the bestsellers list in 2019. An extension of her 2016 Ted Talk, Saujani’s “Brave, Not Perfect” message, is also the subject of an online community and podcast, USA Today said.

Umrigar’s “The Space Between Us” was released in 2006 and hit the list in 2018. In the novel, which was a finalist for a PEN/Beyond Margins Award, two women discover an emotional rapport as they struggle against the confines of a rigid caste system in modern-day India. Her next novel, “Honor,” is set for publication in 2022.