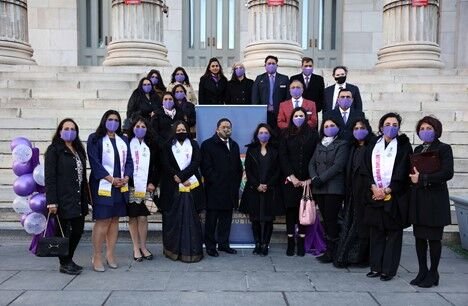 Consul General of India in New York Randhir Jaiswal honored the distinguished awardees with a memento and applauded the honorees’ efforts and resilience to stay dedicated to their respective causes fields and careers even under unprecedented times of the pandemic, according to an FIA release.

The honorees, two of whom attended virtually, were honored with a memento and citation from the Brooklyn Borough president Eric Adams who extended his greetings through Dilip Chauhan, who handles South Asian affairs for the Borough president.

Tejal Amin, founder of Ghargharika, chairperson of the Navrachana Education Society, and brand ambassador of the Swachch Bharat Abhiyan, was among the awardees.

Also awarded was Dr. Uma Rani Madhusudana. Serving at the health care frontline in Hartford healthcare, she became a frontline warrior who has been recognized and applauded as an unsung hero during this pandemic.

Further extending her experience, she assisted with protocols regarding plasma- therapy in India. She will be now featured in a documentary, “Pandemic Way from the Motherland,” which has been shortlisted for an Oscar, the release noted.

Dr. Abha Jaiswal, a dentist with a master in sociology and in public health, was also awarded.

Jaiswal, who speaks seven languages, was recognized for playing a pivotal supporting role of supporting her spouse on national duty of diplomatic assignments; she has lived and learnt in culturally diverse societies in Asia, Europe, and the America, it said.

Awardee Rashmi Aggarwal is a health care first responder who in her service as a nurse provided uninterrupted support and service to her peers and patients and who at the sacrifice of the family and personal time, continuously dedicated and served her time to those impacted by the pandemic, the FIA said.

Sabina Dhillon, a community attorney, was honored for her pro bono services to victims in the community and for her continuous advice and legal guidance to those not able to afford professional legal advice.

The Mask Squad was also honored by the FIA. It is a group of likeminded women who came together to help the community in need with sewing 3,200 masks and sharing them with the first responders and with those in the most need of them at the height of the pandemic.

The seventh recipient was Rashaana Shah, a producer, actress and founder, and managing director of Mulberry Films, a books to film TV and film development company.