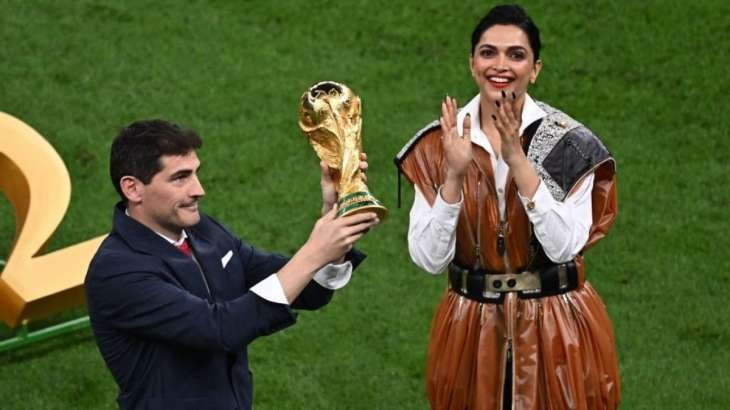 On December 18 morning, Deepika teased her fans with a sneak peek of the Trophy trunk book by Louis Vuitton – a brand that has custom-made the trophy trunk for the world cup. She is the global ambassador of the brand. She kept her hair in a sleek bun to complement her look.

Even as Paris Saint-Germain teammates Lionel Messi and Kylian Mbappe were locked in a nerve-wracking war of wills, with President Emmanuel Macron cheering France from his VVIP box and consoling a disconsolate Mbappe after the defeat, Deepika’s husband, Ranveer Singh, after being briefly seen with her, romanced former Team India manager Ravi Shastri.

In a video tweeted by Shastri, Ranveer, sporting the shades worn by his “Cirkus” character, exclaims: “We are about to witness history, Ravs.” Shastri responds by pointing at Ranveer and declaring: “Whenever something big is happening, catch this guy missing out.” They end their bro moment singing, “I don’t know what to say, I don’t know what to say.”

Before the electrifying action started, the two superstars of cricket-crazy Kerala — Mohanlal and Mammootty — tweeted their presence at the stadium that the entire world watched in nervous anticipation. Mammootty declared: “Witnessing the biggest sporting spectacle! What an atmosphere … What a moment!!”

Before the opening whistle of the edge-of-the-seat thriller, Mohanlal expressed the emotion that must have overpowered all those present at the stadium taken over by more than 50,000 Argentine fans.

The superstar just couldn’t couch his excitement: “At Lusail Stadium, joining the world to witness the clash of the titans and partake of the world’s favorite madness! Awaiting a phenomenal and entertaining game from the bests, just like you all!”