HomeAmericasIndo AmericaIn a First, US Navy Ship Arrives in India to Undergo Repairs

In a First, US Navy Ship Arrives in India to Undergo Repairs 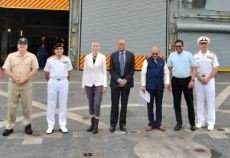 In a First, US Navy Ship Arrives in India to Undergo Repairs

This is the first-ever repair of a US Navy ship in India, providing a huge boost to ‘Make in India’ and ‘Aatmanirbharta in Defense’.

The US Navy had awarded a contract to L&T’s Shipyard at Kattupalli for undertaking maintenance of the ship.

Kumar, terming the event as a red-letter day for the Indian shipbuilding industry and the India-US defense relationship, said: “We are indeed pleased to welcome the US Naval Ship Charles Drew to India, for making her voyage ready. India’s initiative also assumes special significance in furthering the strategic partnership between India and the US. It marks the beginning of a new chapter for deeper engagements.”

He described the arrival of USNS Charles Drew for repairs as a sign of a maturing Indian shipbuilding industry. “Today, India has six major shipyards with turnover of nearly $2 billion. We are making ships not only for our own requirements. We have our own design house capable of making all kinds of state-of-the-art ships. The shipbuilding industry today is not just carrying out conventional things, but is also amalgamating the latest technologies with it,” he said.

Meanwhile, the Defense Secretary also said that the ties between India and the US have been expanding in scale and scope and are based on common values and beliefs of an open, inclusive, and rule-based order in Indo-Pacific and rest of the global common systems. “There has been a tremendous amount of traction in the defense industry cooperation over the last couple of years between the two countries,” he added.

USNS Charles Drew will be at Kattupalli shipyard for a period of 11 days and undergo repairs in various areas.