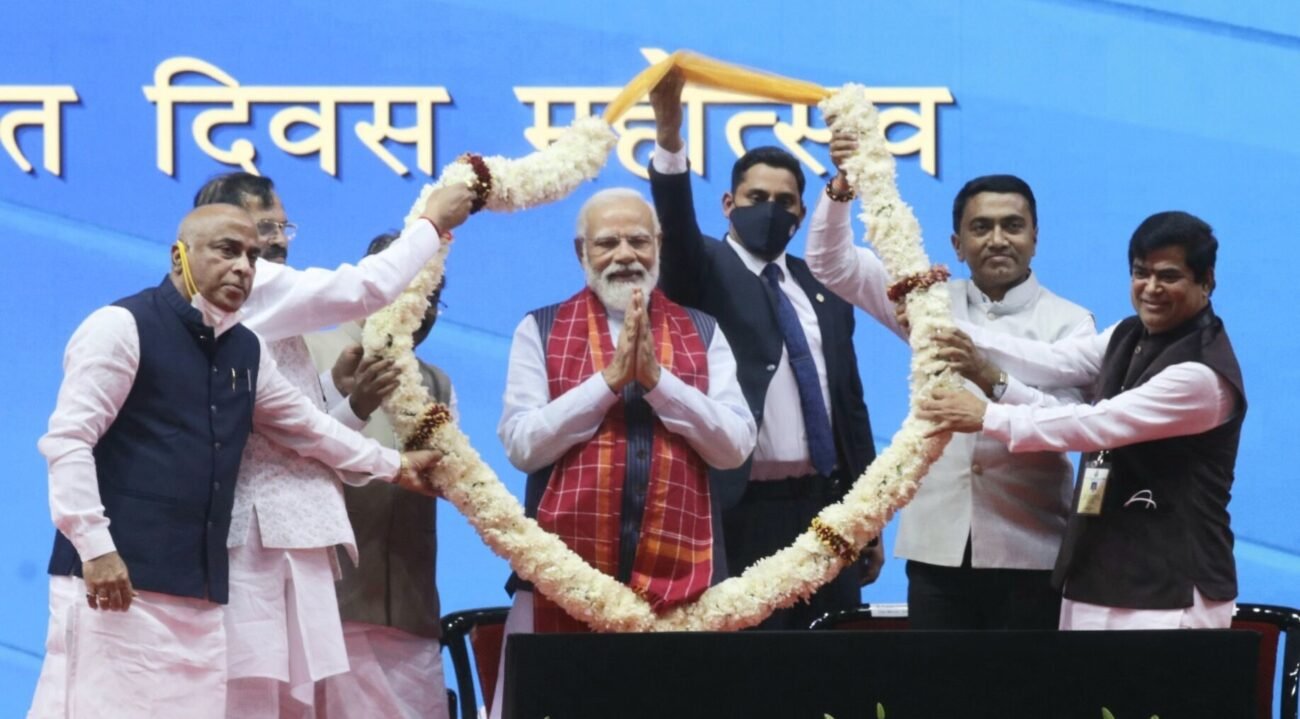 The prime minister also harked back to history to underline the spirit of oneness in India, which achieved Independence in 1947 and Goa which was eventually liberated after 451 years of Portuguese rule by the Indian armed forces on Dec. 19, 1961.

Modi was addressing a gathering in Goa on the occasion of the 60th anniversary of the state’s liberation, after paying tribute to slain freedom fighters, who were martyred during independence struggle.

“I was observing the martyrs memorial at the Azad maidan (in Panaji). It has been modelled in the shape of four hands coming together. This is proof of the fact about how people from all corners of India came together and joined hands (to free Goa),” Modi said.

“Goa had been conquered by the Portuguese at a time when the Moghul empire ruled another part of the country. Since then the country has witnessed so many political storms. How many times did power change hands. But despite the passage of time and changes in power, Goa did not forget India nor did India forget its Goa. It is a relationship which has become stronger with time,” Modi said.

The prime minister also recounted efforts made by the Maratha rulers, namely Chhatrapati Shivaji and his son Sambhaji to take on the Portuguese domination of Goa, while also mentioning the rebellion of the Cuncolim villagers in 1583, when they took on the might of the Portuguese colonists.

Modi also said that freedom fighters from the rest of India could have hung up their boots and rested on their laurels after India obtained Independence, but lauded their drive and initiative to free Goa from Portuguese rule.

“The country became independent before Goa. Most people of India had got their rights. Now was the time for them to live their own dreams. They had options to pursue governance and power. They could have accepted honors and positions. But so many freedom fighters gave up on all this and continued to struggle and sacrifice themselves for Goa’s freedom,” Modi said.

“The people of Goa also did not stop agitating for freedom and independence. They kept the flame of freedom burning bright for the longest period in India’s history. This is because India is not just about political power, India is that thought, a family which protects human rights,” the prime minister said.

Modi further said that ‘Bharat’ was a belief where the nation comes before self, above everything else. “…there is only one chant. ‘Nation First’. Where there is only one resolve, ‘One Bharat, Shrestha Bharat’,” Modi said.

They suffered, they sacrificed, but did not let the movement stop,” Modi said.

The prime minister also made a mention of freedom fighter late Mohan Ranade, who he said had continued to languish in prison even after the state’s liberation from colonial yoke.