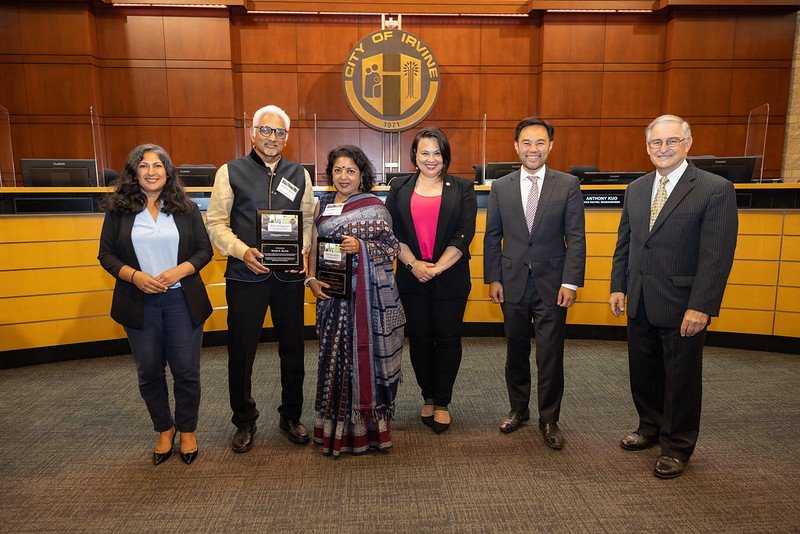 IRVINE CA -The City of Irvine, on June 14, at a regular city council meeting recognized Ramya Harishankar and Harish Murthy as ‘Distinguished Citizens’ and placed their names on a ‘Wall of Recognition’ created for such honorees at the Bill Barber Memorial Park here. Established in 2006, the Wall recognizes individuals, groups, organizations, and businesses who have made significant contributions to the community. Since its inception, about 400 individuals and organizations have been honored on the wall.

Harishankar and Murthy came to the city in 1981 from Chennai and have been full-time residents since 1982.  Harishankar established the Arpana School of Dance in 1982, just completing 40 years of teaching, producing, and presenting traditional Indian dance in the city and beyond. A two-time National Endowment for the Arts Choreographic Fellow, Harishankar is also the recipient of the Helena Modjeska Cultural Legacy Award from Arts OC, the Countywide Arts agency.

She has toured solo and with her dance company worldwide, many of them raising funds – over $100,000 a press release said – for charity. In 1989, she co-founded the Arpana Foundation which morphed into the Ektaa Center in 2004, a premier cultural organization in Orange County.

Murthy’s community service contributions started with the Multicultural Arts Council of Orange County, as a board member spearheading the ‘Kaleidoscope Festival’ in 1989, an early model for many multi-cultural festivals celebrating the diversity of the community. Since the early 2000s, he has lent support to cultural, civic, and community affairs in the city. The Ektaa Center, which he co-founded, has evolved as a de facto community arts and culture center for the Indian American community. More recently, he was appointed to the Board of Arts OC. Murthy has also served on the city’s Senior Citizens Council and President of the Rotary Club of Irvine. “I have and continue to be committed to the community in myriad ways with a passion to build peace and goodwill for the future,” said Murthy in a statement.