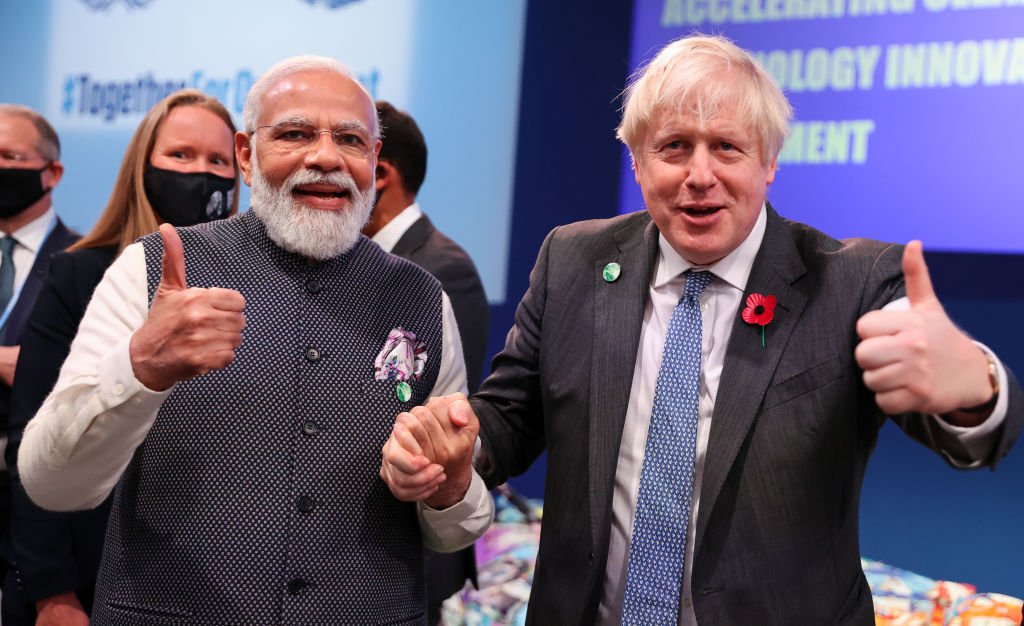 GLASGOW — India’s ambitious program, the Green Grids Initiative, as part of the One Sun One World One Grid, combining a massive increase in solar and wind power with international grids on every continent, connecting energy-rich locations such as sunny deserts and windy coastlines, was launched on Nov. 2 at the COP26 here.

Announcing the launch, Prime Minister Narendra Modi said that India’s space agency ISRO has come up with a solar calculator App that will be useful in deciding the location of solar projects.

The initiative combines large-scale solar power stations, wind farms and grids with rooftop solar and community grids, including village mini-grids, to ensure a reliable, resilient and affordable supply of clean energy for all, and to accelerate the energy transition in all parts of the world to stay within a safe global carbon budget.

The announcement was made in a session on “Accelerating Clean Technology” by Modi and Summit host UK’s Prime Minister Boris Johnson. U.S. President Joe Biden spoke immediately after Modi.

A day prior, on Nov. 1, Modi had – along with a net zero goal year – declared that India will enhance its targets to combat climate change by increasing its non-fossil fuel energy capacity to 500 GW by 2030 and meet 50 percent of its energy requirement from renewable energy by 2030. Solar energy plays a pivotal role in this.

The prime minister invoked Suryopanishad, an ancient Indian text, chanted a shloka from it and said, “The energy required by the humans across the whole world in the whole year, the sun disseminates that much in just one hour. For a balanced path, we will need to look at the Sun.”

The OSOWOG initiative will bring down storage needs and also increase the solar projects that are hampered due to weather and day-time limitations, he said.

Terming it an “important” initiative as India scales up global cooperation on climate action, the director, CEEW Centre for Energy Finance, Gagan Sidhu, said, “Increased electrification from RE is one of the key building blocks for any emissions reduction strategy, and a grid that connects different time zones represents an ambitious alternative to expensive storage on both ends. Not only would it help meet climate commitments, it would also enhance energy security and meet development priorities.”

The grand ambitious launch and the speeches made at the OSOWOG initiative sound like a panacea for all energy related ills. But the real question is, will this actually help on the ground within India? Even with the government claiming to take electricity to all villages, there are thousands who live without power.

“The OSOWOG initiative is not a panacea for all electrification ills, but it is an important step for making the transition to renewable energy possible. An integrated global grid will allow easier trading of renewable energy from where it is best produced to where it is needed. One challenge that many grid connected people face is that the grid is unreliable. By having interconnecting grid across the world, we can ensure that there are less points of failure in the system and hence allow for greater reliability of power,” said Gaurav Gupta, partner and regional director for Asia, Dalberg Advisors.

Dalberg was and is closely supporting the International Solar Alliance for the launch of the initiative with a Dalberg team integrated into the OSOWOG Joint-Secretariat (the operating body of OSOWOG) and supporting the ISA.

Meeting Gates on the sidelines of the COP26 Summit here, Modi expressed appreciation for the work being done by the Bill & Melinda Gates Foundation in India.

Gates briefed the prime minister on the progress of Mission Innovation, and they discussed ways to step up activities in India under it, as well as promising opportunities in areas like green hydrogen, aviation fuels, battery storage, and vaccine research.