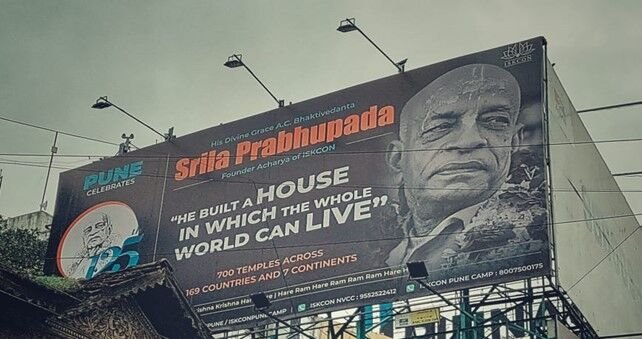 One of three billboards commissioned in Pune, India announcing the 125th anniversary celebrations at the local ISKCON temple. Devotees around the world, including in the Indian American community will be planning various programs to mark the occasion. (ISKCON Pune photo provided)

The International Society for Krishna Consciousness will commemorate its founder acharya A.C. Bhaktivedanta Swami’s (aka Srila Prabhupada) 125th birth anniversary Aug. 31 with worldwide events scheduled for the next year.

Srila Prabhupada, born in 1896, traveled to the United States in 1966 as a spiritual emissary to bring the teachings of Bhakti-yoga to the masses; regardless of nationality, race, or gender, said a press release. His success in creating an international society led to a legacy that includes: building a worldwide organization with hundreds of thousands of followers and temples on every continent; translating of hundreds of spiritual texts, otherwise unknown to the Western world, such as the Bhagavad-Gita; and to become a spiritual guru to generations of spiritual seekers, including the most famous band of all time, the Beatles, to name a few.

He added in the release: “Thus, the 125th anniversary of Srila Prabhupada’s birth is not only important for the millions of members of the Hare Krishna movement and the Gaudiya Vaishnava tradition. The anniversary is also important religious/spiritual history, because Prabhupada’s life is further proof that one teacher, dedicated to the service of God, can bring long-lasting hope, inspiration, and positive change to the world.”

Individual temples and centers around the globe will be hosting various programs or special projects online, due to the continuing Covid-19 pandemic.