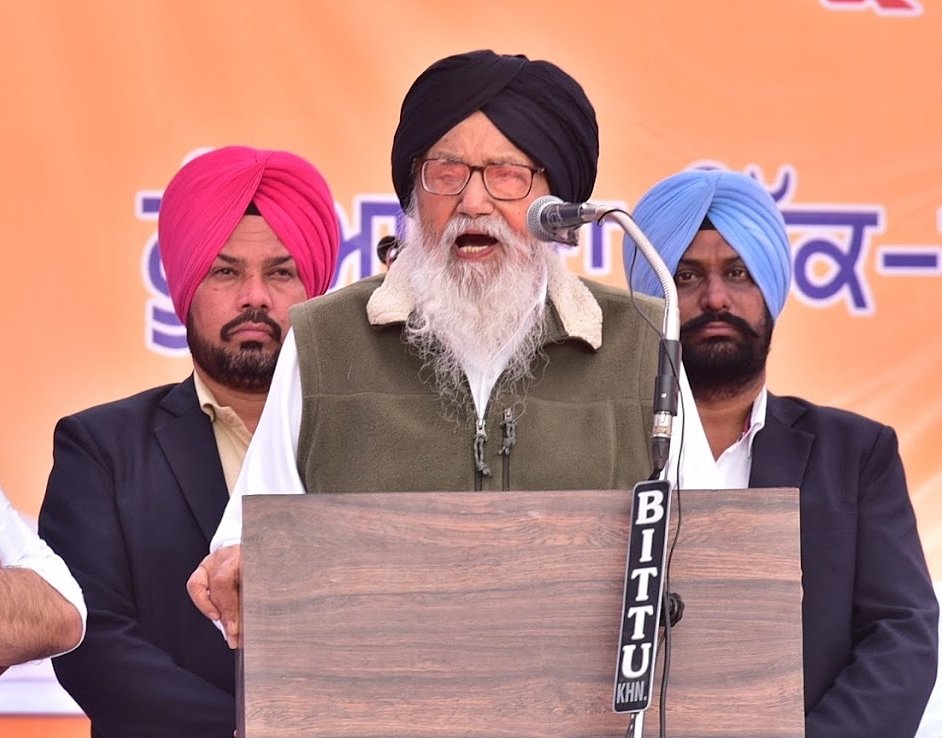 CHANDIGARGH – The century old regional political outfit Shiromani Akali Dal (SAD), fighting these Assembly polls in Punjab to save its ‘sinking ship’ after a humiliating defeat in the 2017 Assembly polls, was largely banking on the charismatic Parkash Singh Badal, 94, whose feet were touched by Prime Minister Narendra Modi after filing his nomination papers for the Varanasi Lok Sabha constituency in 2019. But even he could not retain his seat that he had won for five consecutive terms.

The eldest Badal, lost to Gurmeet Khuddian from Lambi. As per the Election Commission, AAP’s Khuddian, a Congress rebel, polled 65,717 votes and the elderly Badal got 54,360.

His son and SAD chief and Member of Parliament Sukhbir Badal faced humiliating defeat inJalalabad losing by a margin of 23,310 votes to AAP’s Jagdeep Kamboj.

Sukhbir Badal’s brother-in-law Bikram Majithia and his estranged cousin Manpreet Badal, who was in the fray on a Congress ticket, also lost the poll from their respective seats. A five-time MLA and two-time Finance Minister, Manpreet Badal, who is the son of Gurdas Badal, the younger brother of Parkash Singh Badal, lost the elections from Bathinda Urban. Majithia, who was in the fray from Amritsar (East) seat, took the third spot, with 25,112 votes. His arch-rival and state Congress President Navjot Singh Sidhu also suffered a loss in his seat, garnering only 32,807 votes.

HISTORY
For the first time the SAD was testing the waters after severing its ties with the BJP with which it had joined hands in 1997 during the state polls and remained its oldest ally for 23 years.

Parkash Singh Badal had filed his nomination from his bastion Lambi in Muktsar district for the sixth time in a row. With this he was the oldest candidate in the fray in the state. This was his 13th Assembly election.

His son Sukhbir Badal, the Ferozepur Lok Sabha member, was contesting from his stronghold Jalalabad for the fourth time.

After filing his nomination papers, the elder Badal had said, “I am continuing my relationship with the people of Lambi who have stood by me through thick and thin. I am also committed to nourishing the constituency always.”

He said he has complete confidence in the constituents.

“The people have made my campaign their campaign and informed me that they will ensure my victory with a thumping majority,” Badal, who just recovered from Covid-19, had said.

Badal’s party, which is just six years older than him, came into being on Dec. 14, 1920, to free gurdwaras from the control of mahants (priests) appointed by the British government.

The Akali Dal, which aligned with the Congress during the pre-Independence period, is toeing its core ‘panthic’ ideology to safeguard the interests of Sikhs. It was set up a month after the formation of the Shiromani Gurdwara Parbandhak Committee.

Ever since 1997, the Akali Dal had fought all the elections in the state in alliance with the BJP, winning three Assembly elections, till 2020 when it objected to the three now revoked contentious farm laws.

Ahead of the Prime Minister’s visit to Punjab last month, Badal had asked Modi to create the right atmosphere for his much-delayed visit to Punjab by first taking some concrete steps to expose the conspiracy behind the on-going incidents of sacrilege against the Sikh faith and resolving the other major political, religious and economic issues facing the state.

He listed five major issues on which he said a prime ministerial package would lend credence and respectability to Modi’s visit to Ferozepur.

The former chief minister, whose political journey spans over 75 years, during the campaign said only the performance of a political party on past promises should determine the people’s choice.

He had challenged both the Congress and AAP leaders to name just one thing on which the SAD governments did not fulfil the promises the party had made to the people in its manifestoes in the past.

Badal, who became the youngest chief minister of Punjab in 1970, said that he had chosen to contest the elections mainly to stop the outsiders from putting roots in Punjab and enslaving its people.

“I am here to ensure political stability in the state, as peace and communal harmony are prerequisites for development and progress,” he had said.

The Akali Dal was fighting these elections in alliance with the Mayawati-led Bahujan Samaj Party.

Snapping the over two-decade long ties, the Akali Dal pulled out of the National Democratic Alliance in Sept.2020 after sharp differences emerged over the three controversial farm laws.

The Congress, which was out of power in Punjab for a decade (2007-17), got 77 seats in the 2017 Assembly elections after drubbing the Akali Dal-BJP combine.

At that time, Badal had won the Assembly election from Lambi by defeating Congress candidate Amarinder Singh by 22,770 votes.