HomeAmericasIndo AmericaShips Queuing off California Ports Down to Lowest Number 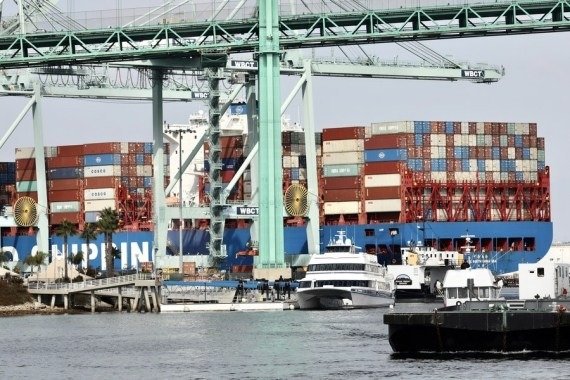 LOS ANGELES, CA (IANS) – Supply chain problems which had crippled leading ports in the US were relieved as the number of ships queuing outside of Southern California ports went down to the lowest number since last fall, says Port of Los Angeles (POLA) Executive Director Gene Seroka.

“The number of ships coming across the ocean, those that have just left, are traversing the Pacific or just about to get here to the ports of Long Beach and Los Angeles, counts at 83,” Seroka said.

He noted that it was the lowest number since last fall.

According to the latest data from Marine Exchange of Southern California, 87 ships were in the Los Angeles and the neighboring Port of Long Beach (POLB), including 28 at anchor or loitering and 59 at berths on Tuesday.

Los Angeles and Long Beach together form the fifth busiest port facility in the world and the busiest in the Americas.

Los Angeles processed about 10.7 million Twenty-Foot Equivalent Units (TEUs) in 2021, breaking its previous calendar year record by 13 per cent and setting a new record in the Western Hemisphere.

Long Beach reported that the calendar year 2021 volume of 9,384,368 TEUs went up 15.7 per cent over the previous year, setting a new annual record as well.

Meanwhile, Seroka disclosed that Los Angeles can handle more cargo than ever before since 55 percent of the port’s truck gates and 30 percent of the rail capacity every day go unused currently.

It is a signal showing that the key point of the supply chain problem in the country is not the congestion of port right now, but the unseasonable expansion inventory which may be creating a feedback look with the logistics capacity and cost issues.

US Logistics Managers’ Index (LMI) in January read as 71.9, which went up 1.8 from last December’s rate and showed significant levels of inventory growth.

Seroka also told Bloomberg TV on Feb.10 that US supply chains had a chance to return to more normal operations after retailers replenish inventories in the next quarter.

“Most retailers continue to tell me they’ll use quarter two to replenish inventory, get that safety stock at a more comfortable level.

“Then we’ll have a chance if we hit these two marks properly to pivot into an earlier-than-normal peak season in early June or July,” he added.