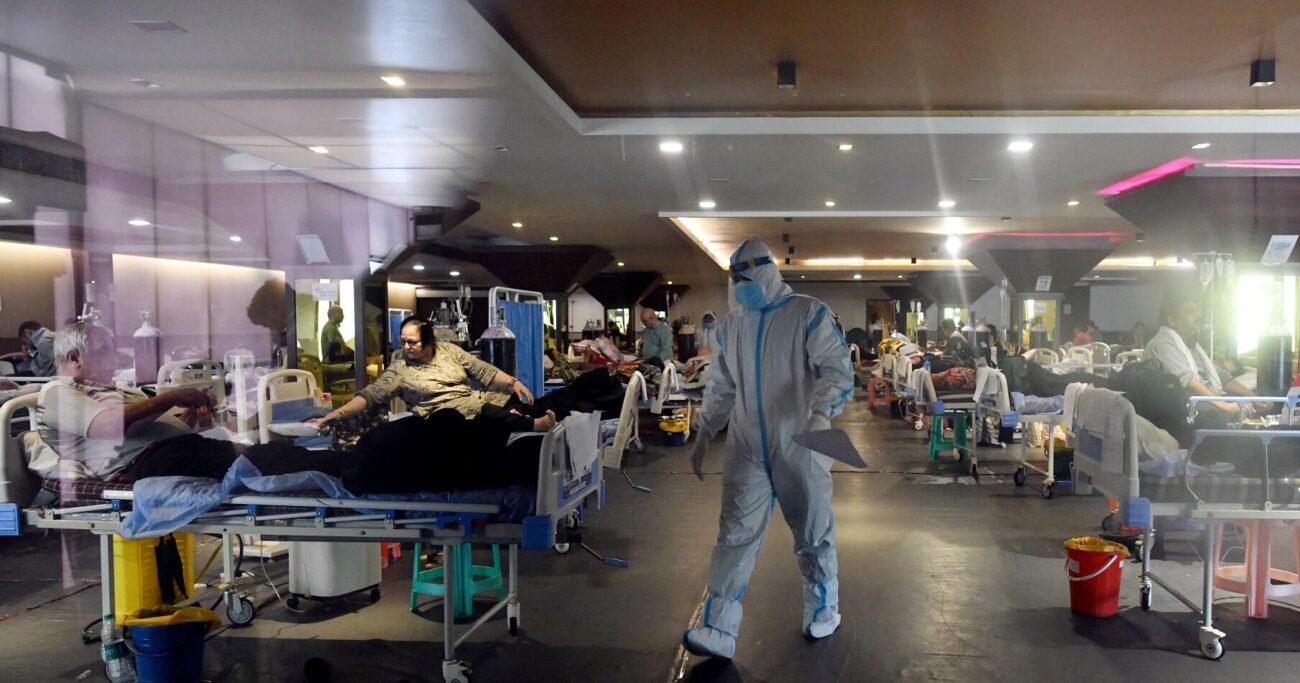 A health worker in PPE gear is seen at a temporarily converted isolation ward for Covid-19 patients in a banquet hall in New Delhi May 4. The Indian American community in Sioux Falls, South Dakota, has been sending money and resources back home to help their families deal with the virus. (ANI photo)

SIOUX FALLS, S.D. — The country of India is going through its worst surge of COVID-19 since the pandemic started more than a year ago, but its effects are reverberating across the world, even in the city of Sioux Falls, where Indian American residents have been forced to remain oceans apart because of the deadly virus.

According to data from Johns Hopkins University, India has become the first country to report more than 400,000 daily cases, with the overall case county most likely underestimated. With the rise in cases, the U.S. has implemented travel restrictions from the U.S. to India.

“The surge in cases happened quite rapidly,” stated Amita Gupta, an Indian American professor at the Johns Hopkins School of Medicine and Bloomberg School of Public Health, in an article from Johns Hopkins University last week. “The stresses that have been placed on every sector of society are catastrophic.”

People from India who live in Sioux Falls talked about how they’re navigating the surge of COVID-19 back home and what they’re doing to help, the Sioux Falls Argus Leader reported.

Kirtana Krishna Kumar was born in India and grew up there before moving to Sioux Falls to attend Augustana University in 2016. When she graduated last year, her parents couldn’t come visit to see her because of the COVID-19 pandemic. Now, she’s found a job in the city and is still waiting for her parents the place she’s called home for the last couple of years.

“I talk to them every day, and fortunately, they are safe,” Kumar said.

Kumar’s parents are vaccinated, which brings her relief, but she said it’s still difficult to hear about other people she knows struggling – and at times dying – from COVID-19 in India.

The majority of her immediate family are back in India. Earlier this year, her 87-year-old grandmother back in India got the virus and recovered from it. When her uncle, who lives with her grandmother got it, the family became worried she’d get it again.

“We are fortunate to even have her,” Kumar said. “We quarantined her and the whole house. It was really scary. After that, she was really weak.”

The day of March 24, 2020 India went into a nationwide lockdown for 21 days. Kumar said after the initial lockdown ended and restrictions were lessened people began attending religious and political gathering again. This led to the country’s first major surge of COVID-19.

“My family’s health is very important to me,” Kumar said. “We’ve all collectively decided we won’t be seeing each other this year.”

Because of the risk of spreading the disease more, Kumar said she’ll be waiting until sometime in 2022 to be reunited with her family, be it in India or Sioux Falls. Meanwhile, Kumar and her family make due with phone calls.

Ramesh Singh has been in the U.S. since 2005 and moved to Sioux Falls in 2009. He, like many other Indians in Sioux Falls, maintains a connection to family and friends in his home country.

Singh visits India once a year at least, and in 2019, he said he visited four different times. For 2020, he didn’t visit, but planned a trip in 2021. As of May 3, because of the new travel restrictions, he’ll have to miss out again on going home.

“First wave, they managed very well,” Singh said. “Everything was in control only because there was a shutdown.”

Singh, who has three brothers and two sisters in India, said the importance of family and friends in his culture has attributed to the risings cases of COVID-19. In India, events like wedding festivities can last four to five days, he said. The close interactions associated with these events and number of people who attend help spread the disease.

“That’s one of the reasons COVID is devastating,” he said. “Social distancing is difficult when one house has 20-30 people. You can’t leave someone isolated.”

The Sioux Falls Indian community is stressed with what’s going on in their home country, Singh said. Being kept away from family is not something they’re used to in their culture.

“I talk to my brothers and sisters often,” he said. “Family is important in India. We keep in touch.”

During the current surge, Singh said he’s lost some distant relatives and one of his college friends to the virus: a professor in Delhi with two young kids.

Now a year into COVID-19, Singh said the virus alone isn’t killing people in India, but rather having to live with the restrictions.

“You can’t just sit home and do nothing,” Singh said. “You have to take care of family. People relaxed, and the result is an increase in number of cases.”

Singh said the Indian community in Sioux Falls has been sending money and resources back home to help their families deal with the virus.

Happy Singh has been a part of the Sioux Falls Indian community for more than 10 years, since opening Shahi Palace, the city’s oldest Indian restaurant. Although the majority of his family lives outside of India, he said he still sympathizes with the struggles faced by his countrymen.

“My wife and my parents, they usually call on a daily basis to check up on their families,” Happy Singh said.

Part of issue he’s seeing from India could be that hospitals are privately owned, and therefore, only cater to those with money who can afford the services, he said.

“A lot of people live below poverty, and people are dying, because they can’t afford medical services,” Happy Singh said.

Alongside his other relatives, Happy Singh said he’s been trying to send help as often as he can to those affected by the pandemic in India. The main way they’ve assisted has been by donating money to organizations that give out oxygen tanks to those in need, because oxygen is running low in India because of the high demand.

“When somebody sends help, you really want to make sure it goes to the right people,” Happy Singh said.

He expects the supply will run out before the demand for things like oxygen tanks are met, he said. Government hospitals near where his family in India lived are overcrowded, he said. The best chance at receiving medical attention if someone gets the virus is to try to go to a privately owned medical facility, he said.

Meanwhile, Happy Singh said people in Sioux Falls have been reaching out to him and asking about his family.

“I’ve had people texting me, calling me and even emailing me, asking about the situation in India,” he said.

As the situation in India worsens, Happy Singh said it’s a time for those with connections to the community to unite. Whether it be in prayer or donations, he said anything can help.