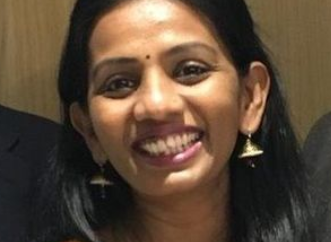 Ranitha Gnanarajah, a lawyer and human rights activist from Sri Lanka, is among the recipients of the 2021 Secretary of State’s International Women of Courage Award. (eca.state.gov photo)

On March 8, Secretary of State Antony J. Blinken hosted the annual International Women of Courage Awards virtual ceremony to honor a group of extraordinary women from around the world, including an honorary award for seven women leaders and activists from Afghanistan who were assassinated for their dedication to improving the lives of Afghans.

The First Lady of the United States Dr. Jill Biden delivered remarks to recognize the courageous accomplishments of these women.

Among the recipients are Muskan Khatun from Nepal and Sri Lanka’s Ranitha Gnanarajah.

Khatun has been instrumental in bringing about new legislation criminalizing acid attacks and imposing strong penalties against perpetrators in Nepal. When she was 15, she was critically injured in an acid attack after she rejected a boy’s romantic propositions. With the help of a social worker, Khatun lobbied for stronger legal action against the perpetrators of acid attacks under duress of threats and the strong social stigma associated with acid attack victims, noted the state department. She went before a parliamentary committee, wrote a letter to Nepal’s prime minister, and eventually met with him in person, to request a stronger law.

Within a year of her attack, Nepal’s president issued an ordinance with harsh penalties for acid attacks and regulations on the sale of acids, a testament to Khatun’s significant advocacy, it said.

Gnanarajah, a lawyer, continues to fight for and defend the rights of the marginalized and vulnerable communities in the country, despite threats and challenges by the state, according to a press release from the State Department, which added that she has “dedicated her career to accountability and justice for victims of enforced disappearances and prisoners detained often for years without charge under Sri Lanka’s Prevention of Terrorism Act by providing free legal aid and related services.”

“As an individual personally affected by the conflict and based on her extensive experience working with victims and their families, Ranitha has demonstrated tremendous passion and dedication to justice and accountability, especially for Sri Lanka’s most vulnerable populations,” it said.

Blinken also presented an honorary IWOC award to a group of seven Afghan women who were assassinated in 2020 while serving their communities during a pivotal moment in Afghanistan’s history.