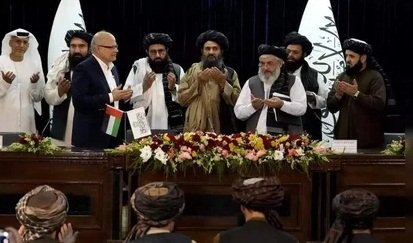 The manner in which the Taliban have been able to retain power in Afghanistan and their latest decisions show that to save millions of Afghanis from impoverishment and death, international community will have to adopt a new approach.

While the nearly one-year old Islamic Emirate of Afghanistan (IEA) government trundles on in the absence of international recognition, financial support and faces international backlash on its mostly anti-women and minorities decisions, reminding one of its earlier harsh tenures, the IEA government has not given up on efforts to cajole the international community whilst trying to engage with its neighbors and regional powers at an equal level.

Recently, a three-day assembly of Islamic clerics and tribal elders, called Loya Jirga, was held in Kabul. The assembly pledged support for the Taliban and called on the international community to recognize the country’s Taliban-led government and freeze its assets.

It is reported that some 70 personalities representing Afghan refugees in Pakistan and 30 others from Iran participated in the Jirga. According to the state-run Bakhtar news agency, about 3,500 religious scholars and elders from across Afghanistan were invited to attend the grand assembly.

Participants of the Jirga were expected to discuss a series of issues, including reopening schools for girls from 7th grade to 12th grade, the type of government, national flag, and national anthem.

However, the indications are that the overwhelming majority of attendees were Taliban officials and supporters, mostly Islamic clerics. Women were not allowed to attend, a practice that started during the US-backed government in the past.

The Jirga issued an 11-point statement at the conclusion, urging countries in the region and the world, the UN, Islamic organizations, and others to recognize theIEA, remove all sanctions imposed since the Taliban takeover and unfreeze Afghan assets abroad.

The US has frozen nearly $9 billion of Afghanistan’s funds. Reportedly US officials and Taliban Foreign Minister Amir Khan Mutaqqi held talks in Qatar last week to explore ways for unfreezing the money.

It also called for mutual respect and coexistence with neighboring countries, in the region and the world at large, stressing that “the Afghan soil won’t be used against any country and Afghanistan also won’t allow anyone to interfere in its internal affairs”.

The participants also described the Islamic State terror group as “insurgent, terrorist”, noting cooperation with the group is against Islamic laws. The statement further described them as “Kharijite group of this age that spreads corruption in our Islamic country. Any help or association with them is illegal. And that any armed opposition against the Islamic establishment is a breach of Islamic laws and regarded as rebellion”.

In a surprise development, the reclusive supreme leader and spiritual chief of the Taliban, Haibatullah Akhundzada reached Kabul from his base in southern Kandahar province and addressed the gathering on July 1.

His appearance added symbolic heft to the gathering. In his hour-long speech carried by state radio, Akhundzada called the Taliban takeover of Afghanistan a “victory for the Muslim world”.

The battle for coal

Meanwhile, there are reports that the Taliban have increased the price of Afghan coal from $90 per ton to $200 per ton, and set custom duties at 30 per cent, hours after Pakistan Prime Minister Shehbaz Sharif announced import plans for the same. The move is also aimed at rejecting allegations that it’s becoming a “puppet” of Pakistan.

But now, members of the regime are seeking to alter the image of the Taliban’s relationship with the Pakistani government. On June 29, the spokesperson for Afghanistan’s Ministry of Petroleum and Minerals, Mufti Ismatullah Burhan, told The Independent Urdu that no coal trade agreement exists between the two countries, and that the Taliban will use coal as a “pressure point” for Pakistan.

Afghan newspaper Daily Hasht-e Subh also quoted warnings from expert Mirahmad Shakib that the real damage of any accelerated coal imports would not be to either country’s economies but to the environment in Afghanistan. “Pakistan is plundering Afghanistan’s resources in the absence of a responsible national government.” Shakib said.

Since it took over Afghanistan last year and the subsequent economic crisis, the Taliban government has been attempting to rely on natural resources for revenue as an answer to the country’s economic crisis.

The Jirga opened in the absence of women representatives and concluded without hinting at reopening schools for girls above grade six and women’s right to work outside home.

In its reaction to the Jirga, Human Rights Watch has said that a decision-making body, such as a Jirga that excludes women and other groups is not legitimate. While human rights advocates claim they do not anticipate and expect significant improvements from the Taliban Jirga in Kabul, Heather Barr, co-director of the Women’s Rights Division at Human Rights Watch, said no one in the Taliban’s Jirga could speak up and that the assembly did not reflect ethnic diversity.

Reportedly, the Taliban elders have been able to keep a complete lock on decision-making since taking over the country last August, and they touted the Jirga as a forum to hear a range of voices on issues facing Afghanistan.

Overall, it appears that Taliban are desperate for the international community to recognize the new Islamic Emirate at the earliest and unfreeze its assets, enabling it to plan for the future.

In its first budget presented in May earlier this year, the IEA government announced a deficit of 44 billion Afghanis ($501 million), the authorities didn’t elaborate or clarified how the gap between expected revenues and planned spending will be met.

The Taliban are under international pressure to be more inclusive as they struggle with Afghanistan’s humanitarian crises. The international community is determined to set its terms while the Taliban are adamant to dictate their own terms for any compromise, as they have been able to control the country for almost a year.

It remains to be seen how it all will pan out as the Taliban are a very stubborn lot and instead of pressure, to find a common ground cajoling and being empathetic will be in favor of both the Afghan people and international community.