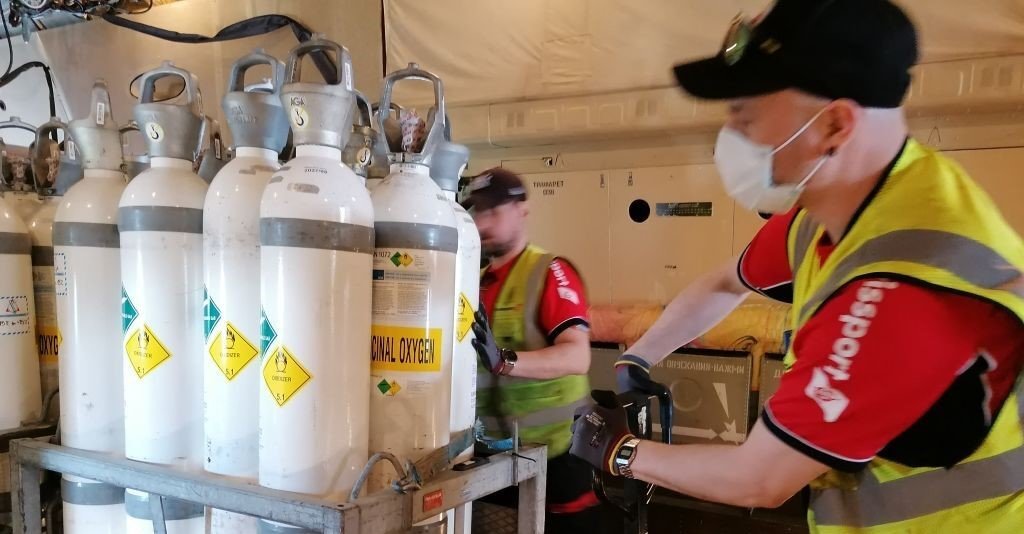 Crew members load medical oxygen and ventilators onto a cargo plane bound for Delhi, India at Helsinki airport in Finland on May 11, 2021 under an EU aid scheme. The relief efforts of the American India Foundation, an Indian American nonprofit, has touched $25 million. (Sam Kingsley/AFP via Getty Images)

Congressman Brad Sherman (D-CA), the Democratic chair of the Congressional India Caucus, on May 12 led the India Caucus leadership and more than 50 of his colleagues in sending a letter to President Biden to urge the administration to bolster the United States’ efforts to assist India as they continue to battle a devastating second wave of COVID-19 infections, a press statement said.

May 12 marked India’s deadliest day with 4,205 deaths reported, carrying the total number of confirmed deaths to more than 250,000 fatalities. The sharp increase in cases has overwhelmed India’s healthcare system. “We must do our part to quell the virus everywhere it persists,” said the statement.

In their letter to President Biden, Sherman and his colleagues reflected on the strength of the U.S-India relationship, and relayed to the administration how India remains in need of additional medical equipment, supplies and other vital resources to help India emerge from this crisis.

State Department spokesperson Ned Price, at a briefing May 11, said that Washington is working closely with India to identify continued, emerging needs in the COVID-19 crisis.

“Taken together, our assistance to combat COVID-19 in India has totaled about $100 million in all,” he said.

“We understand that the private sector to date has donated an additional $400 million, totaling a half-billion dollars in assistance to India,” added Price.

The American India Foundation has raised $25 million so far, according to a PTI report, adding that it is the highest amount raised by an Indian American. Nishant Pandey, CEO of AIF, said they have so far ordered and have commitments for 5,500 oxygen concentrators, 2,300 hospital beds, 25 oxygen plants, and 30,000 non-electric ventilators.

Sewa International USA has raised over $17 million so far.

In related news, Indian American Congressman Ami Bera (D-CA) May 11 joined a Congressional Asian Pacific American Caucus meeting with Vice President Kamala Harris at the White House, where he said he had the opportunity to speak directly to the vice president about the ongoing COVID-19 crisis in India.

Regarding the meeting, Bera stated: “I commended Vice President Harris for her leadership in helping mobilize the Indian American diaspora community to deliver assistance to our family and friends in India. I also shared my hope that the U.S. will continue to be an active global leader in helping stop the pandemic in India and across the world.”

The American Association of Physicians of Indian Origin, meanwhile, sent letters to 100 U.S. senators, seeking their support to “convince the White House to permit more vaccine raw material to be released immediately for local [in India] vaccine production, as well as increasing all types of assistance.”

“In the long term,” noted Dr. Sampat Shivangi, AAPI’s Legislative Wing chairman, “vaccination is still the best therapy and hope.” He added, “At present, India is experiencing acute and severe shortages of the Covid-19 vaccines. Astra Zeneca is releasing 60 million vaccines after due FDA approval this month. We urge the U.S. government to release send at least 30 million doses of the vaccine to India.”