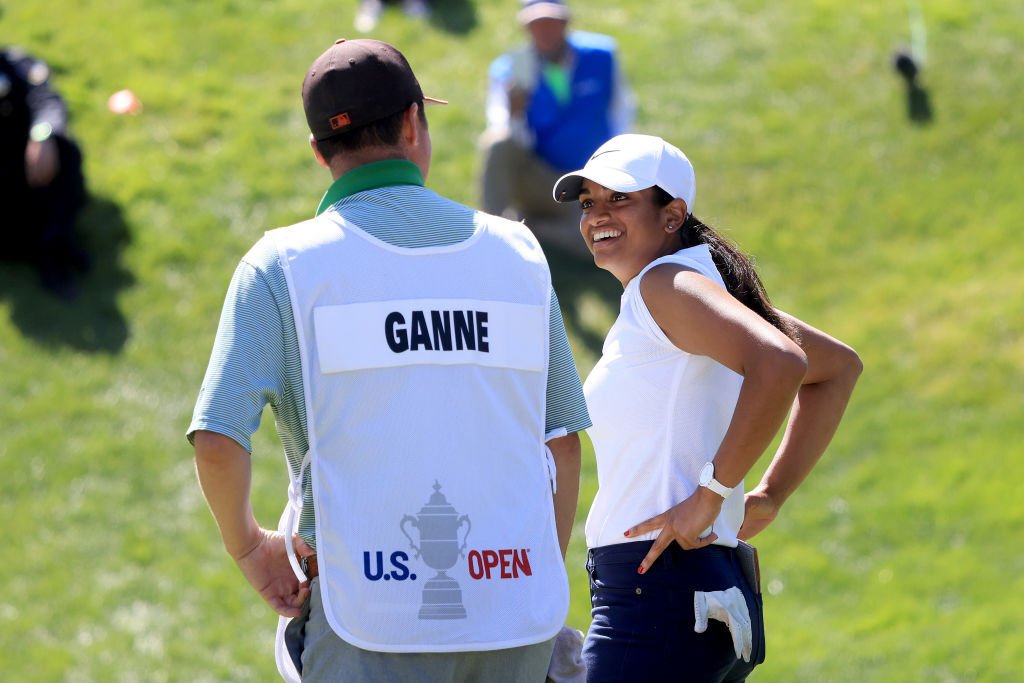 Indian American golfer Megha Ganne reacts after finishing the final round of the 76th U.S. Women’s Open Championship at the Olympic Club on June 6, 2021, in San Francisco, Calif. Ganne was the low amateur of the tournament finishing three over par. (Sean M. Haffey/Getty Images)

Indian American New Jersey high school junior Megha Ganne, from Holmdel, played in the final group, but shot 77 and finished 3 over as the low amateur for the tournament.

“I’m going to remember this for the rest of my life,” Ganne said. “It’s everything I’ve wanted since I was little, so it’s just the best feeling.”

Ganne shot a 4-under 67 on June 3 to become the first amateur in 15 years to have a share of the lead after any round at the U.S. Women’s Open.

The 17-year-old made back-to-back birdies on the back nine to take sole possession of the lead before making bogey on the 18th hole to end the day in a tie with Mel Reid on the Lake Course at the Olympic Club.

India-West Staff Reporter adds: According to shethepeople.tv, Ganne has been playing golf for a long time but started her professional career in her high school junior year. She competed in the 2017 U.S. Women’s Amateur and the 2018 U.S. Women’s Four-Ball Championship. In 2019, she played the U.S. Women’s Open in Charleston.

Her mother, an endocrinologist, told the Times of India that “we have always been an outdoors family who’ve wanted our children to pursue sports rather than video games. That said, Megha is academically focused…she can speak to you after school at 3 p.m.”

After a stellar performance, when Ganne got back home a calculus homework was awaiting her.

After her round June 4 when she was asked what was more difficult: playing the second round of the U.S. Women’s Open or the calculus homework she has waiting for her.

Probably the calculus,” she chuckled, reported the publication. “I don’t know how I’m don’t know how I’m going to manage to fit that into my schedule in the next few days. Hopefully, my teacher gives me a little bit more time to do that but yeah, it’s hard to balance both.”

The tweet soon elicited a response from her teacher: “Hi. I’m Megha Ganne’s Calculus Teacher. I’ll help a girl out 🙂 Megha, you are exempt from the project. We are all rooting for you! Good Luck.”

Ganne’s skill and her demeanor absolutely charmed golf fans across the board.

New Jersey Governor Phil Murphy tweeted this June 4: “New Jersey’s own Megha Ganne is on absolute fire at the #USWomensOpen. Megha – all of New Jersey is behind you as you continue to dominate the leaderboard!”

Golfweek writer Beth Ann Nichols wrote: “While so many are focused on Brooks and Bryson, there’s a high school junior contending at a major … at Olympic!” adding that “My goodness is she a breath of fresh air.”

In an article titled, “Megha Ganne’s memorable run at 2021 U.S. Women’s Open reminded us how golf can simply be fun,” CBS Sports Kyle Porter wrote: “She played her way into the final group on Sunday alongside Lexi Thompson — who would go on to dramatically lose the tournament — and Yuka Saso — who would go on to win in a playoff. And yet, it was Ganne that I could not stop watching… The swing, the energy and the smile that could run a country.”

“Megha Ganne will be known as more than low amateur at the 2021 U.S. Open at Olympic Club,” announced Golf Channel. “The 17-year-old became a new idol to hundreds young girls this week.”

Ganne plans to go to Stanford after graduating high school next year.