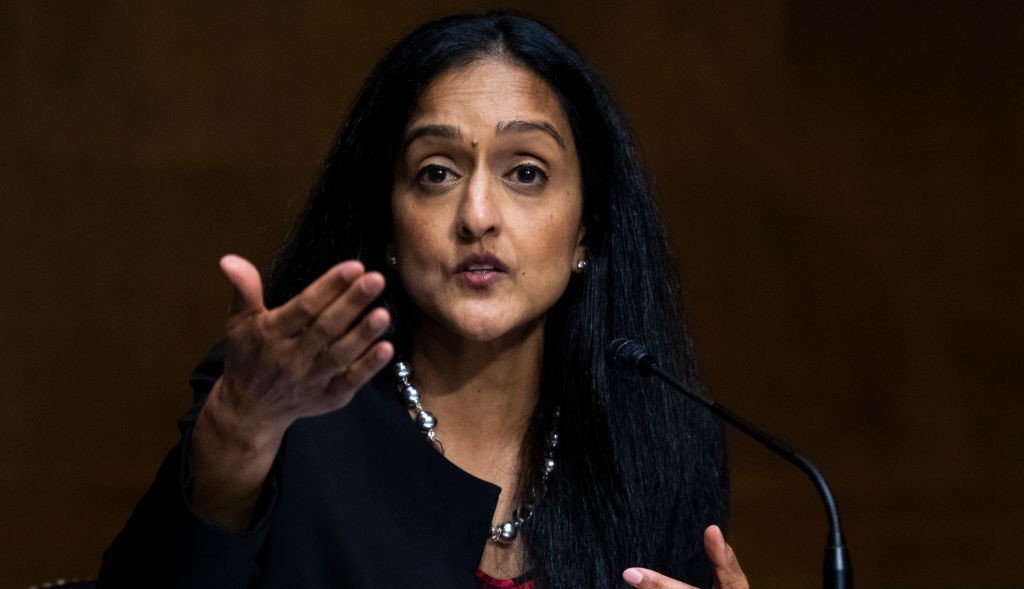 Tweets by Vanita Gupta, President Biden’s nominee for Associate Attorney-General, came up March 9 when she appeared before the Senate Judiciary Committee for her confirmation hearing, where she also received praise for her civil rights advocacy, reported IANS.

Gupta expressed regret for the tweets and said that she had “fallen prey” to “the rhetoric has gotten quite harsh over the last several years.”

“I wish I could take it back, I can’t,” the Indian American added.

Gupta, who has broader support in both parties, faced questions about her past social media presence and statements in her quest for the third-highest position in the Justice Department where she will be in charge of civil and human rights issues, the IANS report said.

She asked the senators to instead “look at my lifelong record” as a believer “in the importance of building consensus” and as “a deeply pragmatic person and relationship builder.”

Republican Senator Lindsey Graham, while praising some of her civil rights work, brought up her tweets, one of which called the Republican Party National Convention in which some senators on the Judiciary Committee participated as “three nights of racism.”

He said that she would have to be involved in cases before several judges whom she had attacked online.

Committee Chair Dick Durbin, a Democrat, recalled her work in Texas as a young lawyer and praised her record as a civil rights lawyer.

He compared her work to that of Thurgood Marshall, the first African American Supreme Court Judge, who had also worked like her with the NAACP (National Association for the Advancement of Colored People) Legal Defense Fund, it said.

Dismissing the criticism of her as soft on crime and anti-police, Durbin pointed to the support she has received from several organizations of law enforcement officials. These include the Fraternal Order of Police, the Major County Sheriffs of America and the Federal Law Enforcement Officials Association.

In her opening statement to the committee, Gupta spoke of her immigrant background and the opportunities her family received in the U.S.

She said, “My parents (Rajiv and Kamla Gupta) are proud immigrants from India, and they believe more than anything in the promise of America. Growing up, they taught me that loving this country brings with it the obligation to do the necessary work to perfect our union.”

She added, “That belief is shared by my husband (Chinh Q. Le), whose family fled violence and war in Vietnam and sought refuge on these great shores.”

During questions about her commitment to religious freedom, she said that she was from a family of faith and that her husband’s family had fled Vietnam to be able to practice their religion.

Democrat Senator Richard Blumenthal, speaking at the hearing, denounced senators repeating what he said was an unfair and inaccurate smear campaign against her that was “despicable rancid.”

The New York Times further reported that Gupta’s approach to criminal justice and policing issues has won her the support of more than a dozen law enforcement organizations nationwide — including the National Sheriffs’ Association, the Major Cities Chiefs and the International Association of Chiefs of Police — as well as backing from across the political spectrum, including from conservative stalwarts like Koch Industries and Grover Norquist.

The conservatives are split on her nomination, with two groups running massive advertising campaigns for and against her.

The Associated Press reported that more than 75 former U.S. attorneys are throwing their support behind Gupta, urging congressional leaders to quickly confirm her to the post.

“Many of us observed firsthand Ms. Gupta’s independence, integrity, and excellent judgment when she served as the head of the Justice Department’s Civil Rights Division,” read a letter to the leaders of the Senate Judiciary Committee, signed by a bipartisan group of former top prosecutors. “In that position​, she worked hand-in-hand with U.S. Attorney’s Offices to protect vulnerable members of our communities by prosecuting those who committed hate crimes, human trafficking, and other violations of our civil rights laws.”

Before her nomination, Gupta was in charge of the Leadership Conference on Civil and Human Rights, a coalition of civil rights organizations.

In the letter to Senate Majority Leader Chuck Schumer, Minority Leader Mitch McConnell and the leaders of the Judiciary Committee — Sens. Dick Durbin, D-Ill. and Chuck Grassley, R-Iowa, the former prosecutors – according to AP, said they understand how critical it is for the Justice Department’s leaders to “have an unshakable commitment to its independence and its integrity.”

“We know Ms. Gupta to be a lawyer and public servant who shares those values: she has devoted her professional and personal life to supporting and defending the Constitution and those it protects,” the letter said. “The country can count on her to lead with passion, conviction, humility, and without political influence.”

Gupta, who has publicly released a financial disclosure form, is thus far the Biden administration’s wealthiest political nominee, according to an ABC News report. She has assets worth tens of millions of dollars.

ABC News reported that Gupta has reported owning between $42 million and $187 million in assets and properties with her spouse in her disclosure report filed to the Office of Government Ethics. She reported earning between $902,000 and $3 million in the past year, the filing shows, it said.

The report cited that the biggest chunks of her assets come from her shares in companies – Avantor, a chemicals and materials company; Aptiv, an auto parts company; and private equity firm New Mountain Capital – linked to her father, Raj Gupta, a corporate chairman and Wall Street financier.

The ABC News report said that she holds much of those assets through family trusts she controls, except for $5 million to $25 million in Avantor; $500,000 to $1 million in Aptiv; and six-figures in New Mountain Finance Co., which are under a brokerage account.

In her ethics agreement provided by the Biden transition team, Gupta, noted the ABC News report, wrote that she would retain her financial interests in those companies but would resign from her position as co-trustee of her family trust. She would also not participate “personally or substantially” in matters related to companies in which she or her family hold a financial interest, per ABC News, which added that Gupta also wrote that she would not participate in matters related to companies in which her father holds leadership roles, including Avantor and Aptiv.