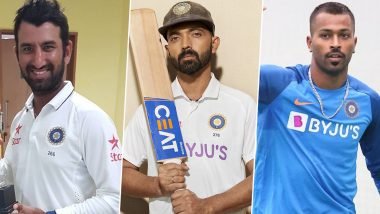 MUMBAI (IANS) – In a major blow, veteran India batters Cheteshwar Pujara and Ajinkya Rahane and all-rounder Hardik Pandya were demoted in the latest central contracts list of the BCCI that was ratified by the Board’s Apex Council on Feb.2.

The BCCI has four categories – A+ which have annual remuneration of Rs 7 crore while A, B and C categories are valued at Rs 5 crore, Rs 3 crore and Rs 1 crore respectively.

Both Rahane and Pujara had produced underwhelming performances in the last season and were eventually dropped from the India’s Test squad. As a result, they have been downgraded from Grade A to Grade B in the latest central contracts list.

Wicket-keeper batter Wriddhiman Saha, who was recently involved in an off-field controversy after being dropped from India’s Test side for the home Test series against Sri Lanka, has been demoted from B category to C category.

Pacer Navdeep Saini and chinaman Kuldeep Yadav have been excluded from the list. Earlier, they were in the C category.