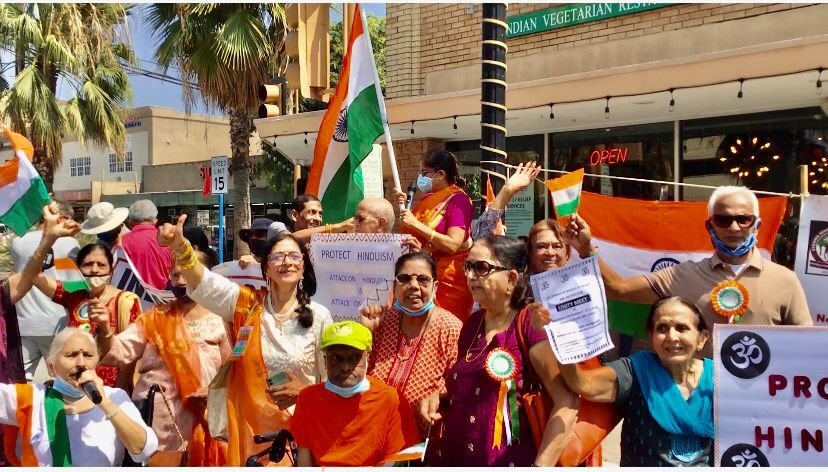 Over 60 Indian American Hindus, most of them seniors, participated in a rally Sept. 8 in Artesia, Calif., to condemn the upcoming “Dismantling Global Hindutva” academic conference. (photo provided)

ARTESIA, Calif. – Nearly 60 concerned Indian American Hindus converged on Little India here on Sept. 8 for a rally to condemn the “Dismantling Global Hindutva” academic conference slated for the weekend of Sept. 10-11, according to a press release.

Participants from diverse backgrounds, mostly seniors and some even in wheelchairs and standing on chairs, gathered in the hot sun near the Indian shops and restaurants in the Little India enclave, located on Pioneer Blvd. and 186th St., around 11:30 a.m. for over an hour. They had come from all over the southland, some coming in buses, to participate in a “United We Can Save Hindutva” rally, said the release.

Ironically being held on the 20th anniversary of 9/11 – the worst terrorist attack ever on U.S. soil – the “Dismantle Global Hindutva” conference “aims to ostracize Hindus and Hindutva (essence of Hinduism), in the name of ‘academic freedom of speech’,” said the release.

Subhash Bhatt, a co-organizer, according to the release, stated, “Hindutva believes in peace and in non-violence and we are here to bring awareness of Hindutva and Hinduism. It has been deliberately mislabeled by non-Hindu communities to give it a negative connotation.”

“This protest rally was conceptualized and organized by ordinary Indian Hindu American citizens and concerned people like you and me, and was well-attended by representatives from 15-20 unique organizations honoring the diverse Indian American community of Southern California,” stated Bhatt, adding: “I was crying when I first saw the conference flyer listing the title as ‘Dismantling Global Hindutva’. What will I tell my children and grandchildren? I said I must do something about it. Our clear and strong message to these universities is: ‘Do not spread the wrong information about Hinduism. Hinduism believes in peace, live and let live’.”

Another protester emphatically stated, “We are all united as Hindu Americans and Americans for world peace and unity, believing in the world as one. We want to protect Hinduism and our Hindu American children from learning wrong information about Hinduism…by your universities. We do not want the 53+ (institutions) to have this conference and will not stand for dismantling Hinduism. Our Hindu American kids will not…tolerate this and we will take our children out of these universities if this (conference) is going to continue. All the 53+ universities need to know that we condemn your conference and your institution. We are a strong voice, you must hear us.”

The “Dismantling Global Hindutva” website claims it will present “multidisciplinary perspectives” and is being “co-sponsored by 70+ centers or departments at 53+ universities,” including most of the revered Ivy League institutions and some of the most well-known western universities in the U.S., Canada, and even some in the UK and the Netherlands.

“I am condemning in the strongest possible terms the @dghconference. I will always stand strong against #Hinduphobia. I want to thank the @HinduAmerican Foundation for leading the charge against this bigotry. @hinduoncampus @hinduampac,” Republican senator from Ohio Niraj Antani said on Twitter.

Suhag Shukla, executive director of the Hindu American Foundation, said the conference “is not only political and partisan. It veers into promoting Hinduphobia and anti-Hindu hatred in the activists and politicians it platforms, in the resources it promotes and in the reductionist definition of Hinduism it presents.”

HAF sent follow up letters on Sept. 1 to the 41 universities initially listed as sponsoring the upcoming conference.

Shukla and HAF managing director Samir Kalra shared that the event organizers had, due to public outcry and several direct requests from the universities, removed the display of logos and replaced it with a list of virtually the same universities with a disclaimer that it was specific departments and centers which were contributing or sponsoring the event.

The initial effort to send emails to university presidents delivered slightly more than 928,000 emails in the span of 48 hours, with the final petition count at 10,360 signatures. The petition requested the universities to: 1) ask the event organizers to remove university names and logos from the event website and promotional materials; 2) ensure the safety and wellbeing of the Hindu students, faculty, and staff on campus who may feel targeted, threatened, or face hostility or harassment as a result of the ‘Dismantling Global Hindutva’ conference.