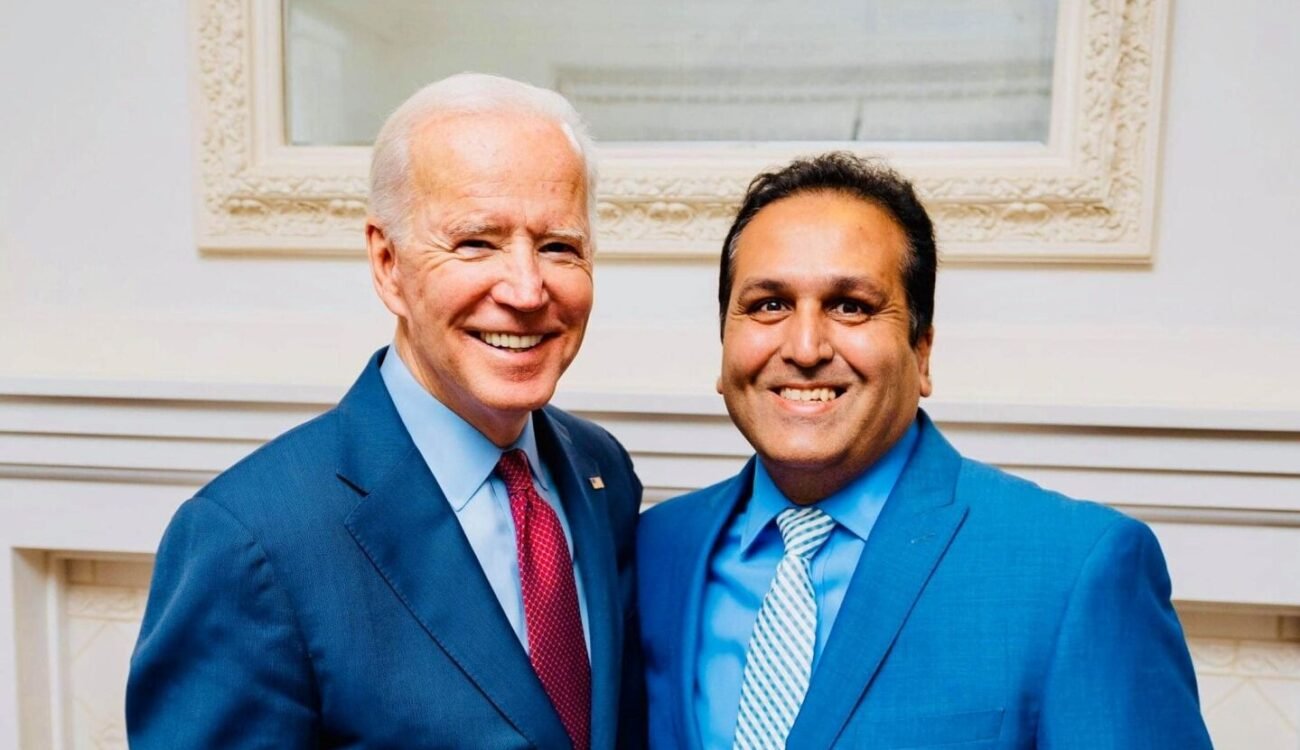 Ajay Bhutoria is also one of the commissioners to be appointed. He is seen here with President Biden. (photo provided)

President Biden announced Dec. 20 his intent to appoint commissioners to the President’s Advisory Commission on Asian Americans, Native Hawaiians, and Pacific Islanders, among whom are four Indian American civic leaders and one Pakistani American.

The Commission will advise the president on ways the public, private, and non-profit sectors can work together to advance equity and opportunity for every Asian American, Native Hawaiian, and Pacific Islander community. It is also charged with advising the president on policies to address anti-Asian xenophobia and violence, ways to build capacity in AANHPI communities through federal grantmaking and policies to address the intersectional barriers that AANHPI women, LGBTQ+ people, and people with disabilities face.

The four Indian Americans to be appointed commissioners, according to a White House press statement, are:

*Ajay Bhutoria, a Silicon Valley technology executive, community leader, speaker, and author who has been recognized for his work. He is a passionate advocate for the South Asian and AAPI communities in the areas of small businesses, educational opportunities, immigration issues, and technological advancement. His expertise in the areas of organizational transformations and change management has supported critical advancements within the AAPI community, and he is committed to the creation of a compassionate and empowering environment for all.

*Kamal Kalsi, LTC, USAR, is an emergency medicine physician from New Jersey who has served in the Army for 20 years and was awarded a Bronze Star medal for his work taking care of hundreds of combat casualties on the front lines in Afghanistan. He has transitioned into the Army reserves, and now serves as a senior advisor for policy vets and a Fellow of the Truman National Security Project’s Defense Council. He founded the Sikh American Veterans Alliance in order to promote diversity, religious freedom, and service.

*Sonal Shah is a social impact and innovation leader who has launched and led social impact efforts in academia, government, and the private and philanthropic sectors for over 25 years. She is the founding president of The Asian American Foundation, starting the largest philanthropic effort to serve the Asian American, Native Hawaiian, and Pacific Islander communities. Prior to TAAF, Shah founded and led Georgetown University’s Beeck Center for Social Impact and Innovation, providing students a first-hand opportunity to work on social impact projects in the public, private, and social sectors. She served as Deputy Assistant to President Obama and created the White House Office of Social Innovation and Civic Participation, worked on international development at the Department of Treasury, and led social impact efforts at Google and Goldman Sachs. She serves on the boards of TAAF, Oxfam America, the Century Foundation, and the National Democratic Institute.

*Smita N. Shah is an engineer, entrepreneur, and civic leader serving as president and CEO of Chicago-based SPAAN Tech, Inc, a multi-disciplinary firm with expertise in public and private infrastructure projects including transportation, aviation, and facilities. Shah serves in various roles with the Chicago Plan Commission, M.I.T., the Museum of Science and Industry, After School Matters, Delhi Chicago Sister Cities Program, YPO, the Lincoln Academy of Illinois, and the Harris School of Public Policy at the University of Chicago. She is a member of the board of MacLean Fogg Company and a member of the Commercial Club of Chicago and the Economic Club of Chicago. Shah earned her Bachelor of Science from Northwestern University, her Master of Science in Civil and Environmental Engineering from M.I.T., and a Post Graduate Certificate in Management Studies from Oxford University.

Also named was Pakistani American Naheed Qureshi, head of Policy Partnerships at Instacart. She has had an extensive 20-year career in civil rights, including serving as a founding board member and later deputy director of Muslim Advocates and as co-chair of the Leadership Conference on Civil and Human Rights Hate Crimes and Bigotry Task Force.

The Initiative is charged with driving an ambitious, whole-of-government agenda to advancing equity, justice, and opportunity for Asian American, Native Hawaiian, and Pacific Islander communities in the United States, said the release. It will focus on helping to coordinate a comprehensive federal response to the rise in acts of anti-Asian bias and violence; address the systemic lack of disaggregated data on AA and NHPI communities; expand language access and language assistance programs for AA and NHPI individuals across federal programs; address educational, health, economic, and housing disparities impacting AA and NHPI communities, among others.