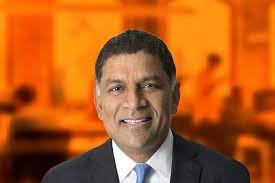 NEW YORK, NY (IANS) – Indian American Raj Subramaniam, the newly-appointed President and CEO of the US-based multinational transportation and courier delivery giant FedEx, has joined the high-profile league of Indian, and Indian-origin leaders, who are running some of the most successful businesses and companies across the world.

Subramaniam joins Arvind Krishna, another IITian as CEO of the world’s oldest technology company IBM Group in Jan.; Parag Agarwal, an IITian from Mumbai who was appointed as Twitter CEO in Nov.last year after Jack Dorsey announced exit; and Anand Eswaran, appointed as CEO of global IT firm Veeam in Dec. 2021.

Besides the field of technology, Indians have also made a mark in other sectors.

They include: Leena Nair, who was named global CEO of French luxury group Chanel; Vikram Shankar Pandit, Indian American banker and investor who is the chairman and chief executive officer of The Orogen Group; Ivan Menezes, CEO of Diageo, one of the world’s largest alcoholic beverages companies; and Amrapali Gan, CEO of Only Fans, an internet content subscription service company, among others.