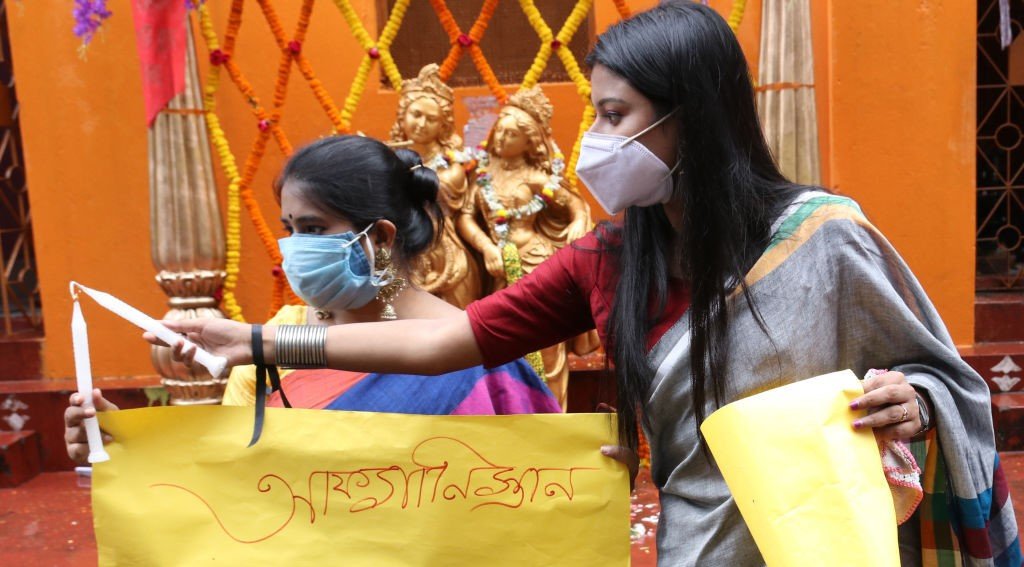 Afghans studying in India hold placards during a protest against the Taliban taking control over Afghanistan and Pray for Peace Afghanistan, in Kolkata, India on Aug. 30, 2021. (Debajyoti Chakraborty/NurPhoto via Getty Images)

NEW YORK – Meeting under the shadow of Washington’s retreat from Afghanistan, diplomats and defense officials of India and the U.S. have discussed the recent developments in the region and cooperation in counter-terrorism.

He said that they “exchanged views on a range of regional issues of shared interest, including in South Asia, East and Southeast Asia, and the Western Indian Ocean” at their meeting Sept. 1.

“(Assistant Defense Secretary for Indo-Pacific Affairs Ely) Ratner expressed his confidence that the United States and India will continue to take their partnership to new heights as they jointly meet the challenges of this century,” Meiners said.

Known as an “intersessional” dialogue in India and “intersectional” in the U.S., the meeting at the level of joint secretaries takes stock of the current developments and the cooperation between the annual high-level 2+2 ministerial meetings.

A readout of the meeting issued by India’s Ministry of External Affairs said that they “considered possibility of enhancing collaboration in areas of counterterrorism, HADR (humanitarian assistance and disaster relief) and maritime security and “exchanged assessments of the recent developments in South Asia.”

Neither of the statements specifically mentioned Afghanistan where the U.S. completed a chaotic pullout of its military on Aug. 31 following the Taliban takeover of the country, which impacts the regional strategic scenario and brings up new threats of terrorism, especially to India.

He said that the officials were “committed to driving greater interoperability between the U.S. and Indian militaries” and they “discussed bilateral and multilateral joint service engagements” and “progress toward operationalizing key bilateral initiatives on information-sharing, logistics, defense industrial cooperation, and joint doctrine engagement through liaison exchanges.”

Advancing “cooperation in new domains, such as space, cyber, and emerging technology areas” also figured in their talks, Meiners said.

The last 2+2 Ministerial Dialogue was held in New Delhi in October just before the U.S. elections and the U.S. was represented by Secretary of State Mike Pompeo and Defense Secretary Mark Esper, both of whom are now out of office.

The next meeting is to be held later this year in Washington will be with the officials of President Joe Biden’s administration.