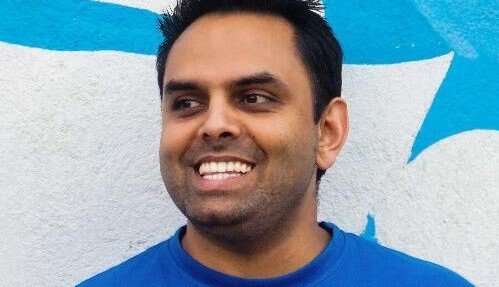 Entrepreneur Kishan Vasani is a lover of food and has a mind for technology. He took both passions and carved out a business melding the two.

Vasani founded Spoonshot, an AI-powered innovation research platform, to leverage AI, external data and the domain knowledge of food science to provide rich insights into the future of the food and beverage industry. Founded in December 2015, the Saint Paul, Minnesota-based company’s mission is to “predict food and beverage innovation opportunities globally with unparalleled confidence.”

To date, the company has raised $1.9 million in funds, including $1 million in seed funding in September 2020 (see India-West article here: https://bit.ly/3rSli4u).

The Indian American entrepreneur started working in the food tech/digital food industry back in late 2011 when he joined what was then an emerging food delivery marketplace called Just Eat in London.

Earlier that year they had raised their Series B round and were growing very quickly. By the time Vasani left three and a half years later, they were a household brand name in the UK and had had a very successful IPO in 2014.

“It was this experience that opened my eyes to numerous possibilities in the food and beverage industry which had historically been slow to adopt technology,” Vasani recently told India-West.

The Aston University (Birmingham, U.K.) graduate said the area he personally felt most connected to was personalization.

“Being a foodie myself, I was surprised that there had not been a standout company to that point (2015) that was helping consumers make better food choices,” he recalled. “By this, I don’t necessarily even mean healthier choices, just choices that were based upon their individual preferences.”

There were leaders in personalization in most other verticals – like Amazon in ecommerce and Spotify in music – but no one in food, he elaborated to India-West.

“We built a consumer mobile app that would try to predict and recommend what you would want to eat whenever you opened it, called ‘Dishq’,” he said. “This experience was a lot of fun but generating revenue was challenging. We didn’t just want to be a better mousetrap.”

They went from a business to consumer platform to a business to business approach. And instead of a mobile app, they sold access to their food recommendations via an API (Application Programming Interface) to food delivery businesses and restaurant technology companies.

“We had more success this time on the revenue side but soon it became clear that our solution, while good, was more of a vitamin than a painkiller,” the Spoonshot chief executive added.

Despite two years passing and two misplaced locations of their technology, Vasani said there was still a belief in the technology – it just had to be applied to the right use case.

“That’s when we started to investigate food analytics. Initially, we considered building an analytics platform for restaurants to help them design menu dishes based upon consumer trends, but we quickly learned that CPG companies faced a similar challenge but that their pain was far greater,” he explained to India-West.

From there, Spoonshot was born.

The company’s innovation intelligence is designed for a range of professionals who work in the world of food and beverage product development. This includes product developers, R&D chefs, consumer insights individuals, marketing innovation teams, information researchers, data scientists and founders, among others.

They currently work with six of the top 20 food and beverage manufacturers in the U.S., and overall the company works with hundreds of companies of all shapes and sizes, the founder said.

Vasani recently had the opportunity to speak about Spoonshot and the mental health aspect of food and beverage at the March 12 Future Food-Tech summit.

Vasani’s presentation, “The Growing Role of Adaptogens in Tackling Stress,” was a success, he noted.

“We find that the audience at this event is very engaged and our participation at previous events in this series has directly resulted in new business for Spoonshot,” he said.

Vasani and Spoonshot hope to continue to leverage data to build food cognition.

“Simply put, wherever data can be applied to help people make better decisions in the food industry is where Spoonshot will be the solution,” Vasani told India-West. “That could mean that we’re powering decision intelligence for robotic chefs, or that we’re providing the data that allows consumers to make healthier choices – which bring us almost full circle to our original business idea,” he said.

In the immediate future, Spoonshot is “laser-focused on the continuous evolution of our core technology and research platform, while working with more companies who are embracing the digital food and beverage intelligence revolution.”

Vasani notes that in today’s age, strategic food innovation decisions are too often made without considering or examining key data sets, specifically external data. There’s too much emphasis on sales data, which is important, but not the be-all and end-all, he said.

“There are many other critical data sets that should not be ignored that will provide a more complete picture of emerging trends and innovation opportunities,” he added. “One of Spoonshot’s key differentiators is that we process and analyze more than 20 types of food and beverage data across 28,000-plus sources. Consequently, our intelligence is strongly validated when compared with traditional research methodologies.”