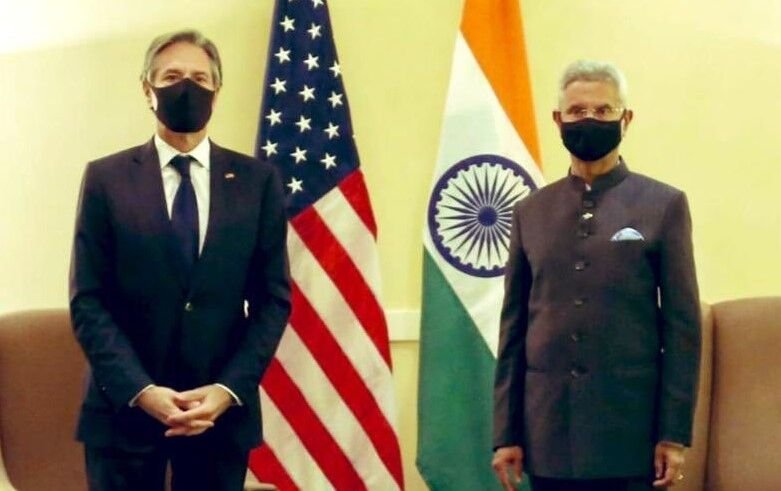 India’s External Affairs Minister S. Jaishankar and United States Secretary of State Antony Blinken met on the sidelines of the G20 summit in Rome on Oct. 30, 2021. (photo via IANS/MEA on Twitter)

They discussed “efforts to deepen the U.S.-India Comprehensive Global Strategic Partnership” during their meeting on Oct. 30 on the sidelines of the 16th G20 Summit, according to State Department spokesperson Ned Price.

New Delhi and Washington have turned to the other side of the Indian Ocean that India straddles after firming up cooperation in the Indo-Pacific region multilaterally with the Quad – the grouping of their countries and Australia and Japan.

Earlier this month, Jaishankar and Blinken held a virtual meeting with Foreign Ministers Yair Lapid of Israel and Sheikh Abdullah bin Zayed of the United Arab Emirates – four countries that share many regional strategic interests – and discussed “future opportunities for collaboration in the region and globally,” according to the State Department.

Jaishankar tweeted after the Rome meeting that they had a “good meeting” and “discussed a wide gamut of issues relating to our partnership. Updated each other on important regional concerns.”

Price said that efforts to strengthen cooperation in the Indo-Pacific region through the Quad and common regional priorities were also discussed.

Expanding global access to vaccines was another topic they discussed given India’s position as the world’s largest producer of vaccines, he said.

India is the linchpin in the Quad’s initiative to supply 1.2 billion vaccines that was reiterated at the summit of the leaders of the four countries last month in Washington.

Prime Ministers Narendra Modi of India and Scott Morrison of Australia, U.S. President Joe Biden and the then-Japanese Prime Minister Yoshihide Suga announced at their summit that their Vaccine Partnership was on track to expand the capacity of India’s Biological E Ltd. to produce at least 1 billion doses of Covid-19 vaccines by the end of next year.

Price’s readout of the meeting between Jaishankar and Blinken also contained the obligatory reference to democracy, which some in India and in the U.S. would latch on to giving it deeper meanings.

It said they discussed “reinforcing their mutual commitments to and support for shared democratic values.”

However, despite Biden’s statements making his administration the global beacon of democracy, such references to democracy are missing in readouts of Blinken’s meetings with leaders of most countries, especially those that are not democratic.

For example, references to democracy were left out of the India, U.S., Israel and UAE meeting, likely in deference to the Gulf nation.

Blinken and Jaishankar have been in close contact through phone calls and virtual meetings and have met in London in May, in Washington also in May and in New Delhi in July.

They are expected to meet again this year in Washington along with Defense Minister Rajnath Singh and Defense Secretary Lloyd Austin for the 2+2 ministerial meeting of the defense and foreign policy heads of the two nations.