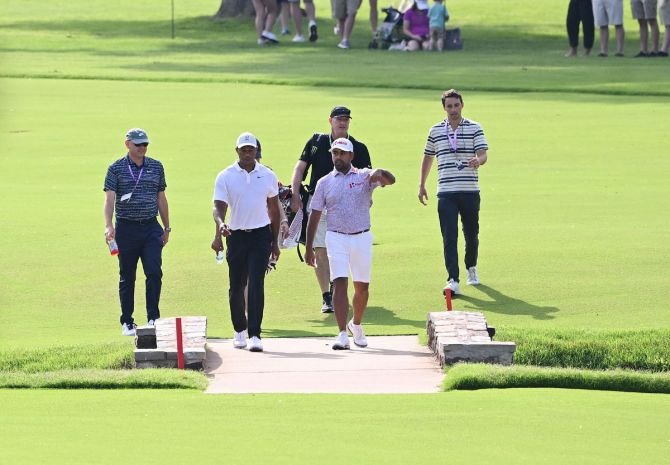 SOUTHERN HILLS, OK (IANS) – Anirban Lahiri couldn’t have asked for a better way to prepare for this week’s PGA Championship after enjoying a nine-hole practice round with Tiger Woods on May 18.

The Indian star, who is making his first major appearance in nearly three years, found himself in the company of the 15-time major champion as he put together some last-minute preparation.

Tapping into the thoughts of one of the greatest golfers of all time was timely, because Woods had won at Southern Hills in 2007 for one of his four PGA Championship wins.

“I had a really fun day, interesting day. It was quite the surprise,” said Lahiri.

The 34-year-old arrived at Southern Hills in Tulsa, Oklahoma only on May 17 night after being with his wife, Ipsa, who delivered their second child, a boy named Avyaan. By chance, Lahiri ended up alongside Woods on the first tee box the next morning.

“Got in late last night and honestly, I’ve not gotten much sleep the last few days. I was just going about my work, and I know he normally practices in the morning because every time Tiger is at a major, the crowds let you know where he’s at,” said Lahiri.

“I headed to the first tee and there were a few players there, and me and Tiger were standing around. There were some confusions as to who was going and it was then just me and Tiger, and he asked me (to play together) and why would I ever say no to that invitation! It was just random, it was serendipity.”

Lahiri has played once previously with Woods.

“Every time I see him, we say hello and we chat. I haven’t played much golf with him, so to go out and play nine holes, kind of have a chill day was a lot of fun. He was super relaxed and very friendly, and we talked a lot about our common interests including Arjun (Atwal), Jeev (Milkh Sigh), and Hero (MotoCorp). He obviously talked about the changes to Southern Hills since he was last here and it was good to get insights on how he sees it on some of the holes,” said Lahiri.