HomeArts/BooksRIP: Dominique Lapierre Of ‘Freedom At Midnight’ Was A Friend Of India

RIP: Dominique Lapierre Of ‘Freedom At Midnight’ Was A Friend Of India 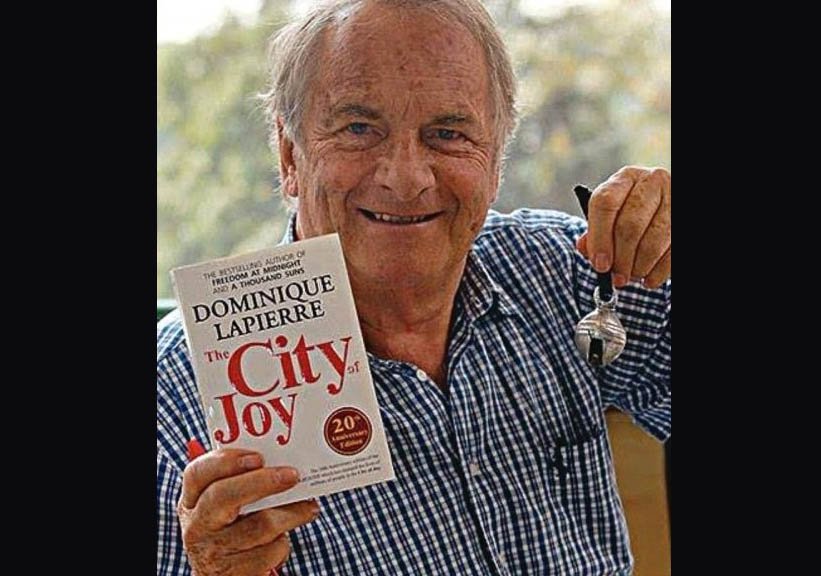 RIP: Dominique Lapierre Of ‘Freedom At Midnight’ Was A Friend Of India

NEW DELHI, (IANS) – French author Dominique Lapierre (91), who had a special bond with India and was known for his iconic book on Kolkata, ‘City of Joy’, has died due to age-related ailments.

Lapierre was awarded the country’s third highest civilian honor – the Padma Bhushan -spoke fluent Bengali, and wrote the iconic “City Of Joy”, the inspiring story of an American doctor who experienced a spiritual rebirth in an impoverished section of Calcutta, apart from collaborating with American writer Larry Collins for seminal works like “Freedom At Midnight” and “Is Paris Burning”.

Made into a movie by Roland Joffe starring Patrick Swayze, “The City of Joy” is about the unsung heroes of the Pilkhana slum in Kolkata. Lapierre donated half the royalties he earned from this book to support several humanitarian projects in Kolkata, including refuge centers for leper and polio children, dispensaries, schools, rehabilitation workshops, education programs, sanitary actions, and hospital boats.

Kolkata, has been nicknamed ‘City of Joy’ after the novel.

To process and channel the charitable funds, Lapierre founded an association called Action Aid for Calcutta Lepers’ Children (registered in France under the official name of Action pour les enfants des lpreux de Calcutta). Aware of the corruption in India, he organized all his fund transfers to India in such a way as to ensure that the money reaches the right person for the right purpose. His wife since 1980, Dominique Conchon-Lapierre was his partner in the City of Joy Foundation.

His other classic on India (with Larry Collins), “Freedom at Midnight”, is a detailed account of the last year of the British Raj, the reactions of the princely states towards independence, including descriptions of the extravagant lifestyles of the Indian princes, the partition of the sub-continent and the bloodshed that followed.

Also written about in detail are the events leading to the assassination of Mahatma Gandhi and the lives of motives of Jawaharlal Nehru and Muhammad Ali Jinnah.

There is a third book on India, “Five Past Midnight in Bhopal: The Epic Story of the World’s Deadliest Industrial Disaster” that Lapierre wrote in collaboration with Javier Moro based on the 1984 Bhopal disaster which the authors researched by living in the city for three years.

The royalties from the book go to the Sambhava clinic in Bhopal which provides free medical treatment to the victims of the disaster. Lapierre also founded a primary school in Oriya Basti, one of the settlements described in the book.

Born on July 30, 1931, at Chatelaillon, Charte-Maritime in France, Lapierre was 18 when he received a Fulbright Scholarship to study economics at Lafayette College in Easton, Pennsylvania. A car freak from his early days, he bought a 1937 Chrysler convertible and fell in love with a fashion editor.

They were married in New York City Hall on his 21st birthday and drove to Mexico in the old Chrysler for their honeymoon. With only $300 in their pockets, they had just enough to buy gas, sandwiches, and cheap rooms in truckers’ motels. In Los Angeles, they won another $300 in a radio game show for Campbell Soup. The prize included a case of soup, which was their only food for three weeks.

Lapierre sold the Chrysler for $400 in San Francisco and bought two tickets on the SS President Cleveland for Japan. The honeymoon lasted for a year. They worked their way across Japan, Hong Kong, Thailand, India, Iran, Turkey, and Lebanon. When they returned to France, Lapierre wrote his second book, “Honeymoon around the Earth”.

On his return to Paris after his honeymoon, he was conscripted into the French Army. After one year in a tank regiment, he was transferred to the SHAPE (Supreme Headquarters Allied Powers in Europe) headquarters to serve as an interpreter. One day in the cafeteria he met a young American corporal, Larry Collins, a Yale graduate and draftee and They became friends instantly.

When Collins was discharged, he was offered a job with Procter & Gamble. Two days before reporting for the new job, the United Press offered him a job as caption writer at their Paris office, for much less money than offered by Procter & Gamble. Collins took the offer from United Press and was soon picked up by Newsweek to be their correspondent in the Middle East.

When Lapierre was discharged, he found work as a reporter for the magazine Paris Match. Collins became the godfather of Lapierres’ first child, Alexandra. On several occasions, Collins and Lapierre met while on assignment. Despite their friendship, they had to compete for stories. But they decided to join forces to tell a big story which would appeal to both French and anglophone audiences.

Their first bestseller “Is Paris Burning?” sold close to 10 million copies in 30 languages as they mixed the modern technique of investigation journalism with the classical methods of historical research. It was also made into a film.

After that, they spent four years in Jerusalem to reconstruct the birth of Israel for the book “O Jerusalem!” Lapierre was proud that after spending a great deal of time in Jerusalem he knew each alley, square, street, and building in the Holy City intimately.

Lapierre and Collins wrote several other books together, notably “The Fifth Horseman”, the last being “Is New York Burning” before Collins’ death in 2005.

RIP true friend of India Dominique Lapierre. You will be greatly missed.