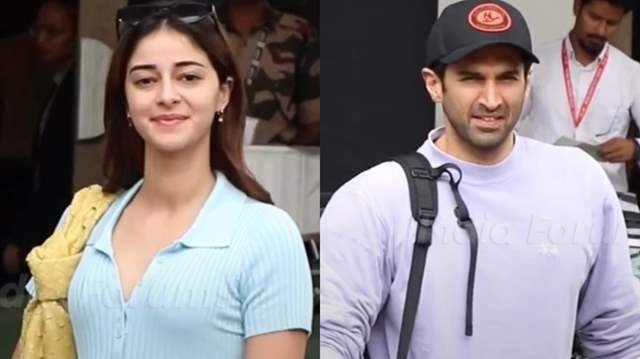 Sanjay Kapoor shared a string of pictures which he captioned, “#godiskind #dreamcometrue #fifaworldcup2022 #doha #qatarairways #semifinal, Argentina vs Croatia, all set for tonight.”

In one of the pictures, Aditya could be seen posing with Sanjay Kapoor, Chunky Panday, Ananya Panday and Shanaya Kapoor at the airport.

Post-match, Ananya took to her Instagram account and shared a reel video which she captioned, “WHAT AN EXPERIENCE!!! The FIFA World Cup 2022 semi-finals -Argentina beating Croatia, seeing Messi just be the legend that he is, David Beckham waving at us and getting to see all this with my Papa and best friends thank you.”

In the video, Ananya could be seen supporting team Argentina during the first semi-final match of the FIFA World cup 2022.

Recently, actress Kriti Sanon hosted a Diwali party where the who’s who of Bollywood marked their presence. Aditya and Ananya were also a part of the bash.

One of the pictures of Aditya and Ananya from the party went viral and since then their dating rumors spread on the internet like wildfire.

The image was originally shared by Neha Dhupia. In the picture, Neha posed with her husband Angad Bedi and host Kriti. The trio was clicking a selfie, but it was Ananya and Aditya in the background that caught eagle-eyed fans’ attention.

In the image, the rumored couple looked busy in their conversation as they unknowingly get clicked in the background.

The duo has still not officially confirmed their relationship.