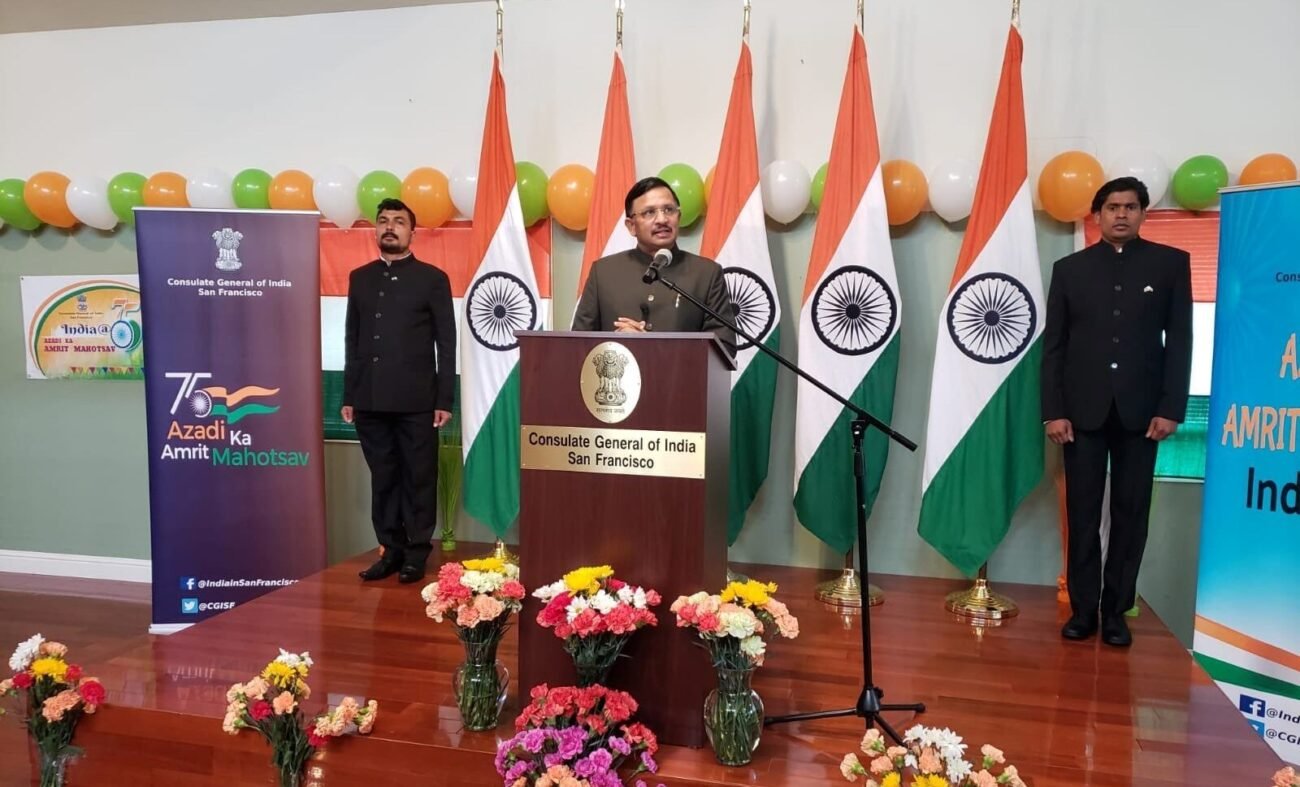 India’s Consul General in San Francisco TV Nagendra Prasad gave a speech during India’s 75th year Independence Day celebrations at the Gadar Memorial Hall. Prasad later told India-West he was deeply touched by the outpouring of support from the Indian American community during the second wave of the pandemic in India last April and May. (photo courtesy of the Consulate General of India in San Francisco)

The proclamation recognized “the important contributions made to our city by Indian Americans.” It also recognized the 13th anniversary of the San Francisco-Bangalore sister city relationship, which was established by former San Francisco Mayor Gavin Newsom, who travelled to Bangalore to cement the initiative.

“San Francisco is committed to working with the Consulate General of India to encourage deeper connections between Indian people and the people of San Francisco,” read the proclamation, noting the aim of deepening business, trade, education, and multicultural relationships.

Attendance at the event was limited, in keeping with Covid protocols. At the beginning of the ceremony, the Indian flag was hoisted over City Hall: Foster and India’s Consul General in San Francisco TV Nagendra Prasad together raised the flag over the Beaux-Arts building.

On the evening of India’s Independence Day Aug. 15, City Hall was lit up resplendently in the colors of the Indian flag.

India is celebrating its 75th year of Independence with a 75-week celebration known as ‘Azadi ka Amrit Mahotsav’, which will continue until Independence Day in 2022. The celebrations kicked off with a two-day virtual film festival, streamed over YouTube.

A day earlier, the San Francisco Indian Consulate hosted a flag-raising ceremony at the Gadar Memorial Hall in San Francisco, a structure dedicated to the Gadar Party movement, a California-based organization which fought for India’s Independence from the British.

Speaking at the ceremony, Prasad paid homage to the 75th year of India’s independence and noted that the Azadi ka Amrit Mahotsav would celebrate “India’s diversity, democracy, multiculturalism, and multi-religious nature of our democracy.”

The U.S.-India relationship has deepened “from strength to strength,” he said, noting the increased number of collaborations in the economic arena. Prasad spoke about U.S.-India collaborations in information technology and innovation; health care and pharmaceuticals; and renewable energy and climate change, among other endeavors.

“There are huge opportunities for continued collaboration,” he said.

“The Indian American community on the West Coast has been very dynamic, very vibrant,” said the Consul General. “We have seen their affection during the second wave of the Covid pandemic. Everyone was out to provide emotional and material support and we are very grateful for that.”

Prasad later told India-West he was deeply touched by the outpouring of support from the Indian American community during the second wave of the pandemic in India last April and May.

India was one of the hardest-hit countries in the world as the Delta variant, which was first identified in India, took force. India’s official death toll at the time was around 400,000 but public health experts predicted death rates 10 times higher, noting that the majority of Indians lack access to health care, and that many died at home, and thus were not counted.

Prasad noted to India-West that Indian Americans provided not only monetary relief but equipment such as oxygen concentrators and generators. An IIT alumni organization created a platform on which those who could access a hospital could gain access to basic remote advice and care.

“We are so grateful to the Indian diaspora. We admire their attachment to India,” he said.

The Consul General noted that India is better prepared for the expected third wave. “There are many lessons we learned from the second wave, and we now have better preparation on the ground.”

Prasad noted that infection rates have vastly dropped in India. More importantly, he noted, recovery rates are over 97 percent.